Her List of Must-Haves for Life in America: Sheep Shears, Blankets and Silverware 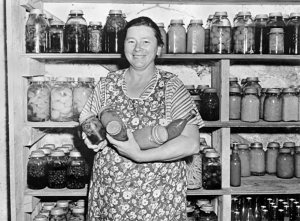 Bessie Skalicky was born on March 11, 1901 in Polhora, Slovakia, a village at the foot of a mountain near the Polish border.  Her parents were Jozef and Aneta Jelen.  Jozef worked as a lumberman, and Aneta managed the farm and raised their six children, two of whom died, however, one being Bessie’s twin brother, Paul, who died at age two “because he was the runt.”

Bessie attended the local school until the equivalent of the eighth grade but skipped school often.  At the time, she says, Slovakia was ruled by Austria-Hungary, and the children had to speak Hungarian in school.  Bessie was one of the unfortunate children who found it hard to learn Hungarian and was frequently slapped or hit for lapsing into Slovakian.  To make matters worse, the Jelen children were likewise slapped at home if they spoke Hungarian, so Bessie tried to avoid school altogether so that she wouldn’t be confused.

She loved to sing, however, and had a beautiful voice, often accompanying her father whenever he got out his accordion or fiddle.  “Sing for us!” he would often say.  At some point, Jozef happened to meet a young WWI veteran, Ignac Skalicky, and was impressed with his own musical talent as well as his good looks.  Also, it didn’t hurt that he owned his own farm.  Accordingly, when Bessie was twenty-one, Jozef arranged for her to marry Ignac, who was himself more than willing, as he was impressed with Bessie’s ability to work hard.  Bessie agreed, and the two of them were married and moved to Ignac’s farm.  They had four children in Slovakia: Agnes, Danica, Cecelia, and Justina, though Danica died as an infant.

In 1931, Ignac and Bessie decided to leave Slovakia for America, hoping to improve their meager situation.  Before they left, however, Bessie’s father, Jozef, died suddenly at age 50 in his sleep.  It was a Sunday morning, and the whole family was dressed and ready to leave for Church when Jozef, suddenly not feeling well, said he would stay home and lie down for a bit.  When the family returned, they found him lying peacefully on top of his bed, still in his Sunday best, dead.

Bessie hated leaving her widowed mother, but the plans had already been made.  Besides, she took her father’s death as an omen that they should go.  They were only allowed to take one trunk between them all, so, besides clothes, Bessie packed what she thought they would need in their new life: blankets, silverware and sheep shears.

The little family made their way to Phillips, Wisconsin and bought a small farm there, where Bessie and Ignac had three more children: Margaret, Boris and Edward.  They made a success of their farm, though Ignac died of stomach cancer when he was only 57, as did Boris at age 43.  Bessie remained on the farm with their youngest child, Edward, until 1967 when she suddenly decided to move to town.  There, Bessie continued to sew and garden and loved to study history, writing many articles for the local paper.  And always she loved to sing.

In 1987, Bessie began to find it hard to live alone as her mental state began to deteriorate, so she moved to Chicago to live with her daughter, Agnes. Unfortunately, however, after several years, Agnes was no longer able to care for her, either, because of her own degenerative muscular disease and was forced to bring Bessie to a nursing home.

Bessie was quite upset at first, having always had a fear of nursing homes, but she seems to have eventually adjusted rather well to her surroundings.  Although she proceeded fearfully, she seemed happy to have found a few fellow residents with whom she could speak Slovakian and could be found sitting and talking with them most days.

f you liked this true story about the past, check out Michelle’s historical fiction/mystery series, set in the 1930s in Chicago: