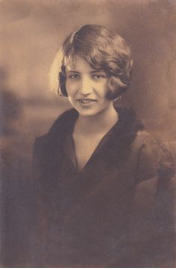 Adele had emigrated with her family at age five from Czechoslovakia and had vigorously attempted to educate herself, not only procuring a trade – stenography – but in classical music, literature, opera and theater as well.  She was spunky and smart, a real go-getter.  She loved her job and had made many friends there, including a girl named Bea with whom she often had lunch.

Adele reports that on one particular day in the summer, as she and Bea passed through the lobby of the bank on their way to lunch, Bea spotted a young man she knew, George Cernik, and stopped to talk with him.  He happened to be in the bank with his brother, Karel, so as the two of them talked and caught up, Adele and Karel politely stood aside to wait, making small talk and exchanging awkward pleasantries.  Eventually, the brothers continued on their way, Adele and Bea hurrying now to eat something before their lunch break was over.

A few weeks later, at a dance Adele had helped to organize, a good friend, John Wesley, pointed out the Cernik family to her.  Adele immediately recognized Mr. Cernik from the theater group she was a part of as they had actually been in a few local plays together.  John then went on to ask her an awkward favor.  It seems that Mrs. Cernik had asked John if he would ask Adele to ask her youngest son to dance.  Unheard of! Adele thought to herself.  Asking a boy to dance!  And in front of his family, too!  John pleaded with her, saying that Mrs. Cernik had practically begged him.  Adele reluctantly agreed as a favor to John and to Mr. Cernik, and it wasn’t until she approached the Cernik’s that she realized that her intended dance partner was none other than Karel, whom she recognized from their chance encounter at the bank.  Gathering up all her courage, then, Adele politely asked Karel if he would like to dance, to which Karel responded with a shocked and very loud, “No!”  Karel’s mother and sisters gasped and scolded him for his rudeness and proceeded to push him out onto the dance floor with Adele.

“What a lemon!” thought Adele, noting that he wasn’t even a good dancer.  No polite conversation flowed between them, and when the dance quietly ended, they separated.  It is interesting to note that years later, Karel admitted to Adele that he thought her an awful hussy that night, asking him to dance!

It wasn’t until about a month later at another dance that Karel approached Adele and very shyly asked if he could accompany her home.  Adele, stunned by his invitation, replied that she was already being escorted home with Archie and the girls from work.  At the sight of his downtrodden face, however, she hurriedly promised that he could take her home next time.  Accordingly, then, the next month, when Karel nervously, hat in hand, again asked Adele if he could walk her home, she kept her promise and said yes.

This was the beginning of their courtship, odd though it was, considering Karel was so shy and introverted that no one believed he would ever marry, especially someone as outgoing, talkative and forward-thinking as Adele Bartos.  But they obviously found something to love in each other, it seemed, for six months later they married and have been together, happily, for over 65 years.