“We Hid in the Walls” 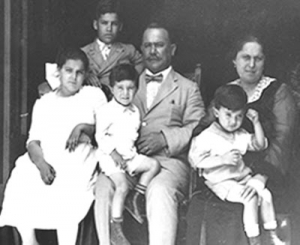 Violeta Salcedo began life during the days of the infamous Pancho Villa. She was born on October 4, 1909 in Mexico to Alejo Abascal and Yamila Villalobos. According to Violeta, her great grandparents were Spaniards who controlled much of what is now Mexico. Her immediate grandparents were thus landowners, as well as tailors, who controlled the government, the school, the shops, the church, and who organized all of the town’s holiday celebrations. They had beautiful adobe homes with orchards of fruit trees, and they lived a very privileged existence.

Unfortunately, however, Violeta’s childhood was a time of chaos in Mexico, as Pancho Villa and his band of revolutionaries often raided the villages in the north of Mexico where Violeta’s family lived.  Even though she was a very little girl, Violeta remembers hearing the warning cries that would ring out whenever Pancho Villa was sighted on the outskirts of the village.  The men of the village would then go out to fight him, while the women and children hid in secret hiding places covered by wallpaper in the walls of the houses.

Violeta says that she witnessed much violence and atrocities committed by Pancho and his men, including the hanging of two of her cousins. The worst incident involved the owner of an inn where Violeta’s family once happened to be hiding. Pancho Villa took the innkeeper, hung him by his feet and shot him in the head, then called dogs over to eat his brains. Violeta says it is an image that will haunt her all her days.

As it turns out, Pancho Villa wasn’t the only threat to her family.  Violeta’s father, Alejo, was an even worse enemy.   According to Violeta, Alejo was the black sheep of the family.  His father, Miguel, wanted him to go to college and then to law school, but the rebellious Alejo ran away to the United States when just a teenager, where he lived a nomadic life working odd jobs for several years.  When he returned to Mexico, he married Yamila Hernandez, who was from a relatively poor family, and had nine children with her.

Bitterly disappointed with his only son, Miguel refused to give Alejo a position in any of his businesses or to give him any land upon his return to Mexico, so Alejo was forced to do factory work, though he found it difficult to maintain a job at all.  He began to drink more and more and smoked marijuana constantly.  His already fiery temper grew worse, and he began to beat Yamila and all of the children, even Violeta, who was the youngest.  Once, when she was just nine-months old, Alejo apparently beat Violeta into unconsciousness when she wouldn’t stop crying.  His angry rages increased until he actually murdered a man—his own brother-in-law, Ernesto.  Apparently, when Miguel began to favor and treat Ernesto as a son, Alejo confronted him and killed him in front of his wife, who was Alejo’s sister.

Banished after that by his father and the other townsfolk, Alejo and Yamila and all nine children began a nomadic life throughout Mexico and “the Spanish lands,” where they went from town to town looking for work.  Alejo was unable to provide for all of them on just his intermittent wages, so Yamila was forced to seek work as well and would leave the children in charge of the oldest daughter, Isabel, whom the other children called “second mother.”  Apparently, Isabel was as cruel and abusive as Alejo, however, and Violeta’s life under Isabel’s rule was almost worse than before.  She still cries when she remembers how cruel Isabel was to them.  She would cut switches from the lemon trees and beat them until they bled for even the smallest infraction.

This went on until Violeta was almost ten years old, at which point Alejo decided to uproot them and move to Chicago, where he heard there was a lot of work and where some distant relatives were already living.  In Chicago, Violeta barely went to school and was forced instead to work in factories to help make ends meet, as did all of her siblings.  Life continued this way until Violeta began to blossom into a beautiful young woman.  It was then that Alejo would look at her approvingly and comment that she reminded him of how Yamila used to be when they first met, young and beautiful, not the old and broken-down woman she had become.  This made Yamila terribly jealous, and she began to resent Violeta and to treat her badly.   Violetta was apparently the cause of many fights between Alejo and Yamila, the result being that Alejo again began to beat Violeta to appease his wife’s jealousy.

Desperate to get away from this situation, Violeta confided in a co-worker, Cesar Salcedo, and told him about her terrible plight.  Cesar urged her to move in with him.  Violeta says she knew what that meant, but agreed to live with him if he promised that they would some day get married.  Cesar promised, and Violeta accordingly moved in with him.  She stayed with Cesar for five years, and while she was relatively happy with him, she began to doubt whether she really wanted to marry him after all.  Just when she had come to that conclusion, however, Cesar surprised her.  She was late for work one morning, and Cesar offered to drive her to save time.  Instead of driving her to work, however, he drove her to city hall where he expected her to marry him, then and there.  Violeta was stunned and wasn’t sure what to do.  She did not want to “humiliate him in public” by refusing him, so she said yes, especially since he had been “nice enough to ask me.”

Violeta informed him, however, that she would not endure any beatings, which Cesar agreed to.  Only once did he raise his hand to her, but Violeta, angered, slapped him first. He never tried again. As a husband, Violeta says Cesar was “okay,” and together they had four children: Donna, Julia, Albert and Enrique.  Tragically, both Julia and Albert died young of cancer. Cesar, too, died in 1954, leaving Violetta to raise the kids alone. She worked as a housekeeper in a nursing home for 16 years to support them. Once Donna and Enrique left home to get married, Violeta lived alone for several years before going to live with her brother, Ricardo, with whom she became very close.

Violeta was apparently very happy living with Ricardo until her toe became infected.  For weeks. Violeta refused to see a doctor until Ricardo called her daughter, Donna, to intervene.  Donna then forced Violeta to go to a doctor, but it was too late.  Eventually, the toe had to be amputated.  To make matters worse, while recovering in the hospital, Violeta had a fall, which resulted in a broken hip.  Thus, upon discharge from the hospital, she was sent to a nursing home for extensive physical therapy.   She refused to participate in the therapy, however, despite her goal of wanting to get strong enough to go home to live with Ricardo again.

Other than refusing therapy, Violeta made a relatively smooth transition.  She was very accepting of her fate and seemed neither excited nor depressed by her admission.  Her only source of distress was hearing other residents cry out, as she feared they might be being beaten or abused by the staff.   When asked about her hobbies, she claims that years ago she enjoyed dancing or gardening but only when “other people allowed me.”  Despite being a victim of violence all of her life, Violeta seemed to harbor no bitterness or anger.  “I don’t let things bother me,” she would say placidly, as if nothing bad had ever happened to her in her life.