“We All Have Questions…” 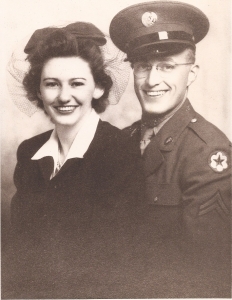 Evelyn Feldman was born on October 31, 1922 in Chicago to Russian Jewish immigrants, Aron and Riva Mayer.  In Russia, Aron worked as a tailor, but once in Chicago he went into the “junk business,” which involved going around with a horse and wagon collecting, buying and selling used goods or metal scraps.  Riva stayed at home and cared for their five children, of which Evelyn was the youngest.

Evelyn attended high school and then got a job downtown working for Collier’s publishing, which mainly published sports and racing magazines.  She remained with them a few years until they closed down and then went to work for a finance company called Madison Discount Co.  While she was there, her mother, Riva, passed away from a stroke at age 54, which left her home alone with her father, as all of her siblings had already married and left.

As it happened, the Mayer family had always been very close to the Feldman family, one of Evelyn’s older sisters being best friends with one of the Feldman girls, though all of the children played together at family functions.  In fact, when Evelyn was just seven, she and her friends and one of the Feldman girls formed a club called “The Little Women,” in which they promised to be friends forever.  Upon finding out about the secret club, William Feldman, the oldest of the Feldman clan, teased them and said they should instead call themselves “The Little Pests.”

It was very surprising to Evelyn, then, after WWII broke out, that William, five years her senior, asked her to write to him while he was away, having immediately joined up.  She agreed, however, and through their letters, they fell in love.  When he came back from the war, they were married on June 1, 1947.

The young couple got a small apartment, and William went into the junk business with Aron, though by now they had a truck instead of a horse and wagon.  Evelyn got pregnant right away, but later miscarried the baby, which was very devastating for them both.  Soon she was pregnant again and had Polly and later, Paul.

After a number of years, William became the foreman for the streets and sanitation department and then a precinct captain for his ward.  Evelyn says that absolutely everyone knew Bill and that he considered everyone in his ward his personal friends and would do anything for them.  He worked constantly for the ward, almost as if “he was married to it,” laughs Evelyn.

She, too, however was very active in the community.  Besides caring for Polly and Paul, she was a volunteer at the Ruth Lodge Home for Spastics and also volunteered at the Women’s Defense Corp, where they sold bonds and stamps and worked in hospitals for servicemen.  Evelyn says that they were very busy, but she and Bill managed to spend a lot of time together and that they loved each other very much.  “He was a good man,” Evelyn says, “kind to everyone.”

It was hard then, when Bill died at age 71.  But Evelyn’s grief was doubled when her daughter, Polly, died just six months later.  Polly was 38 years old and living with Evelyn and Bill, caring for them and working at a menial job.  She was extremely close to both of her parents, and some said that she just couldn’t face Bill’s death, wanting to die herself.  She developed a cold of sorts and stayed home from work for a few days.  She refused to go to the doctor, and when Evelyn went in to check on her one morning, she found she found her cold and clammy.  Evelyn immediately called the ambulance, but Polly died en route.  Evelyn says that not only did she lose a daughter that day, but she lost her very best friend.

Unsure of what to do next, Evelyn put her townhouse up for sale, thinking it would take about a year to sell, which would give her time to plan out what to do with the rest of her life.  The townhouse sold immediately, however, forcing her to move in with her son, Paul, and his family.  It was meant to be a temporary arrangement, but then Paul remodeled the house and built an in-law apartment for her to stay permanently.

As time has go on, however, Evelyn has started to have a number of health problems, including a cerebral hemorrhage, which she survived she says because while it was happening, she fell down the stairs, cutting her head open and releasing some of the blood.  Recently she broke her shoulder and has been admitted to a nursing home for rehabilitation.  She is hoping to go back to Paul’s, but Paul does not see this as realistic.

Meanwhile, Evelyn is an enthusiastic participant in the home’s activities, though she enjoys sitting and talking with people the most.  She is very bright and intelligent and can talk about almost any subject.  She is extremely pleasant, despite the loss of her beloved Bill and Polly.  She says she still misses them, but adds, “We all have questions.  There are no answers.”