She Never Really Stopped Loving Him 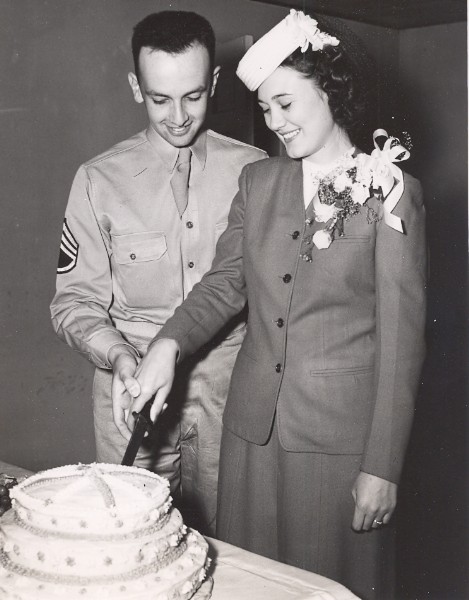 Grace Phillips was born on October 3, 1922 in Alder Point, Nova Scotia to Warren McAndrews and Mary Jane Wilson, both of whom were Scottish Canadians.  Warren was a coal miner, and Mary Jane cared for their ten children: Margaret, Grace, Leon, Calvin, Rosemary, Dale, Katherine, William, Mattie and Lillie.  Lillie was actually the daughter of Mary Jane’s best friend who had died during childbirth.  Lillie’s father was overwhelmed and distraught and had no use for the baby that had somehow lived despite the botched birth, so Mary Jane took her and raised her as their own daughter.

When Grace was about twelve or thirteen, the McAndrews decided to move to Chicago in hopes of a better life.  Warren, desperate to get away from the mines, found “a good job” in the city as a carpenter.  Grace only completed seventh grade and then stayed home to help her mother with their large family.  In her teens, she got a job at a factory that made decorative braiding, a skill Grace became quite good at.  It was one of the things, actually, that attracted her future husband, Gordon Phillips, to her.  When he first met her, he noticed that even though the clothes she wore were simple and not expensive, she made them look elegant by adding braiding.

Grace and her sister, Rosemary, had the same set of friends and often socialized in the big dance halls around Chicago.  It was at one such place, the Merry Gardens, that Grace was introduced to a mutual friend, Gordon Phillips.  Gordon and Grace started dating and fell in love, but when the war broke out, Gordon immediately joined up.  They decided to get married before he shipped out, so Grace bravely traveled alone to North Carolina where Gordon was stationed in order to get married, as he was not allowed to leave the base.  Shortly after the wedding, Gordon was indeed shipped out to Europe, so Grace returned home to Chicago to live with her parents and to wait for Gordon to come back.  She got a job in the meantime at a factory that made gold rings.

Unfortunately, the war did not go well for Gordon.  He was captured by the Germans and spent eight months as a prisoner of war.  When he finally came home, he was only 110 pounds.  He got a job right away, however, in a tool and die factory, and Grace quit her job to be a housewife and then a mother.  Together, she and Gordon had three children: Donna, Carol and Steven.  They began their married life in a small apartment on the north side and moved from place to place until they settled in an apartment on Diversey, where they remained together until 1970.

Grace and Gordon’s marriage, however, was not a happy one.  “He was never the same” after the war, Grace often said.  “He wasn’t the man I married.”  Grace tried hard to make it work, but Gordon began drinking more and more until she could no longer take it.  Gordon moved out and eventually remarried, while Grace remained in the apartment with Steven, the only child still at home.  Grace got a job as a purchasing clerk for the Society for Visual Education in Chicago and managed to support herself and Steven over the years.

Grace’s daughter, Donna, remembers her mother as being very submissive to Gordon, who suffered from severe mood swings, among other things.  “But when she divorced him,” Rosemary says, her mother became “much more independent.”  She went out more and became more social.  She had always enjoyed reading, embroidering and crocheting, but she now took up walking, too, sometimes spending her entire day off simply walking through the city.  Once Steven got married and moved away, she likewise got more involved in her church, St. Bartholomew, and volunteered many hours to the St. Vincent De Paul society.

Though Grace and Gordon had lived for years and years apart with little or no contact between them, Grace was very affected by Gordon’s death and went into a depression after he died.  Donna believes that her mother never really stopped loving her father.  According to Donna, Grace never once spoke negatively of their father, despite all that had gone on between the two of them.  It is perhaps not surprising, then, that just two months after Gordon’s death, Grace suffered a stroke, which left her right side paralyzed.  She spent five weeks in the hospital recovering.  When it was time for her to be discharged, her family suggested giving a nursing home a try.  Grace agreed to this but believes her stay at the home to be temporary, though her daughter, Donna, confirms that she and the rest of the family feel it is a permanent move, as it is impossible for her to care for herself now.