A Child Prodigy and the Life That Followed 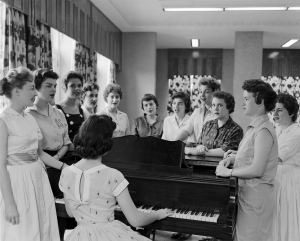 Valentine Conrad was born on February 26, 1910 in Chicago to Wilma Sheppard and Frank Knauz.  Valentine’s early life was rather convoluted, as her mother was married three times.  Wilma’s first marriage apparently only lasted three months before she divorced her husband.  She then married another man by the name of Frank Knauz with whom she had two children: Valentine and, six years later, Edmund.  Eventually, however, Wilma and Frank divorced as well.  Wilma next married a man by the name of Oscar Strumsky.  Oscar legally adopted Valentine and Edmund, but they kept Wilma’s maiden name of Sheppard.

Valentine, it seems, was an extremely intelligent child—a prodigy, in fact.  At age four, Wilma made her practice the piano for eight hours a day, and by age twelve, Valentine played Carnegie Hall.  She went to Northwestern University in Evanston at an early age and graduated from the college’s music school.

In her early twenties, Valentine found herself working in a music store and there met a man by the name of Lyndsey Conrad through her friend, Helen, whom Lyndsey had dated once.  Lyndsey Conrad was originally from Duluth, Minnesota where he attended a junior college and, upon graduation, got a job with the railroad.  When he got laid off shortly thereafter, he decided to move to Chicago and start a lumberyard business.  When Helen introduced him to her friend, Valentine, the two hit it off and began dating.  They eventually married when she was 25, and he was thirty.

With the Depression and the then the War, during which the government rationed lumber, Lyndsey’s lumberyard eventually failed.  The young couple decided to move back to Minnesota, where Lyndsey was able to get another job with the railroad.  It was in Duluth that they had their son, Gerald.  The family lived in apartments until Lyndsey and Valentine finally saved enough to build their own home.  It is interesting to note that Lyndsey remained in this house until he died in 1983.

When Gerald was ten years old, Valentine decided she could no longer take the life she had created with Lyndsey, and returned to Chicago to live with her mother and her brother, Edmund.  She severed all communication with Lyndsey and even Gerald and started her life over.  Gerald says he knows little of her life in Chicago except that she loved the piano, theater and playing bridge.

Valentine apparently became very close to Edmund’s fiancé, Ida, whom he was engaged to for over 25 years.  Ida and Valentine became almost like sisters.  At some point, it seems that Edmund had a stroke and spent 12 years in a nursing home before he eventually died.  He left all of his assets to Ida, though he had created a trust fund for Valentine as well.  After Edmund’s death, Valentine, Ida, and another friend, Lorraine, became very close and spent all of their time together, including holidays.  Besides piano and bridge, Valentine loved pottery, painting, music, movies, museums, swimming, and gardening.  She did not like to travel and never once left Chicago except for the short time she lived in Duluth with Lyndsey.

In 1983, Valentine got word that Lyndsey had died in Duluth, and three years later, she gathered her courage and decided to seek out Gerald.  Despite the fact that they hadn’t communicated for over thirty years, Gerald welcomed her with open arms and forgave her for being so absent in his life.  Valentine discovered that she had a daughter-in-law, Carol, and four grandchildren as well.  After that, Gerald and his family came to visit Valentine in Chicago from time to time, Valentine delighting in being able to take her grandchildren sight-seeing and to various plays.

Valentine, as she grew older, maintained an independent life style and stuck to a daily routine, which consisted of leaving her apartment by nine am, taking a bus to the Levy Center to play the piano and bridge, and returning to her apartment with a bag of groceries to cook dinner with.  Gerald describes her as a very opinionated, determined woman who hated men and the medical industry both.  She could be extremely generous and kind, however, with those she knew well and trusted.

When she was eighty-three, Valentine suffered a stroke, which left her partially paralyzed and unable to speak, hence her admission to a nursing home.  Gerald and Carol visit infrequently, as they live in Minnesota, but they did not think Valentine would want to be moved from Chicago.  Valentine seems depressed and withdrawn and is not able to communicate at this time, which, Gerald says, is probably torture for her.  In the past, he says, his mother dealt with stress by pacing or by turning to music, neither of which she can do now.  At times she is agitated and even tried to strike Carol when they last visited.  She seems happiest, if that is even possible at this point, when music is played for her on a phonograph in her room or when she sits listening to classical music or jazz on the radio.