Three Husbands, a Deceitful Son, and the Pigeon Club 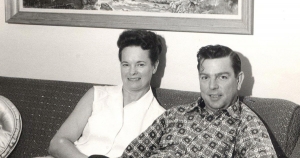 Marie Bosko was born on July 4, 1912 in Chicago to Dusan Cizek and Alena Holub.  Both Dusan and Alena were immigrants from Czechoslovakia, but they met and married in Chicago.  Dusan worked as a cabinet maker for John M. Smythe, and Alena cared for their eight children, though two of them died.  Their first baby, Alice, lived only one month, and their fourth child, Joseph, died as an infant as well.  Alena joined them in their graves just two days before Christmas in 1924.  She was only fifty years old, and no one seems to remember what she died of.

Dusan eventually remarried, and his new wife, Olga, had three children of her own.  Marie says that Olga was “alright” as a stepmother, but that she “had her moments” and favored her own children over the six of them.  There was never enough to eat, Marie says, though Olga somehow managed to remain obese.  Marie was not surprised when Olga died young of a heart attack.  Dusan, on the other hand, lived to be 86 and died, Marie believes, of“a broken heart.”  She doesn’t think her father ever really got over Alena’s death.  Her theory is that he never really loved Olga, but had only married her so that he would have someone to take care of the kids.

Marie went to school at St. John’s until seventh grade and then quit to get a job.  At thirteen, she began working in a factory that made hairpins.  Olga insisted that a portion of Marie’s pay check go to her, which Marie thought very unfair, and thus Marie began to try to save up to move out on her own.  At some point, Marie met Lester Soat, though she can’t remember exactly how.  She thinks it may have been through friends.  She eventually married Lester, who worked as a file clerk at GM.  Marie continued working at the hairpin factory for a time before quitting to work at Arco, a factory that made playing cards.  In all, Marie worked in factories for over 39 years, even after their son, Morris, was born in 1931.

Marie and Lester seemed to have a relatively quiet life.  Marie says she loved Lester, but explains that they were not overly expressive of their feelings for each other.  “We didn’t need to show it,” she says.  Marie and Lester only had one child, Morris, whom Marie describes as “troubled” and who was often bullied.  When he was nineteen, Morris left home and traveled around the country.  Marie tried very hard to stay in contact with him over the years, but it was difficult.  Even after Lester died of heart disease at age 43 in 1950, Morris did not come home for the funeral.

Two years later after Lester’s death, Marie married Victor Lange, who had been a cook in the service.  Marie claims that he drank too much, but she insists he wasn’t an alcoholic.  Marie and Lester had a somewhat rocky relationship, and after only five years of marriage, he died of cirrhosis of the liver.

Victor died in February of 1957, and by November of that same year, Marie was married again, this time to Charlie Bosko, who worked in a paint factory.  With Charlie, Marie seemed to have finally found her soul mate, and the two of them very much enjoyed each other’s company.  Charlie belonged to a pigeon club, and he introduced the hobby to Marie.  Intrigued, Marie eventually joined the club as well, and the couple often spent their vacations traveling with their pigeons to different competitions.  Marie is very proud of the fact that they even won some medals over the years.  Her other pastimes were baking and crossword puzzles.

Charlie and Marie were together the longest—27 years—until he, too, died.  He was 67 years old and died of congestive heart failure in 1984.  After Charlie’s death, Marie remained alone.  She had retired from factory work in 1976, and she struggled to find something to occupy her time, the pigeon club having disbanded years before.  With Charlie gone, she seemed lost and unable to find a new hobby.  She suffered a stroke in 1987 and another in 1988.  At this point, her son, Morris, who had been absent from her life all these years, reappeared on the scene.

Morris managed to convince Marie to sell everything, including the house, and to turn over all the assets to him.  Once all of the transactions were completed, Morris then proposed they move to Las Vegas and live together there.  Marie was lonely and hoping to renew her relationship with her son, so she agreed.  Not surprisingly, it only took a couple years for Morris to gamble it all away.

Impoverished, Marie was hospitalized in the early 1990’s with pneumonia.  By a weird twist of fate, it was while she was in the hospital that Morris also contracted pneumonia and died of it at home.  Marie was utterly crushed by his death.  Although he had swindled everything from her and reduced her to poverty, she loved him anyway and clung to him as the only thing she had left in the world.  Marie managed to attend Morris’s funeral, though she was very weak, and then went to stay with her sister, Gladys, who was still living in Chicago.  Gladys has tried her best to care for Marie, but the strain has recently become too much for her, forcing her to put Marie in a nursing home.

Marie seems to be adjusting relatively well to her new home, though she says she is lonely and often still cries for Morris.   She is reluctant to form any new relationships and spends most of her day reading large-print books and watching “Days of Our Lives.”