“This is Not My Father.” 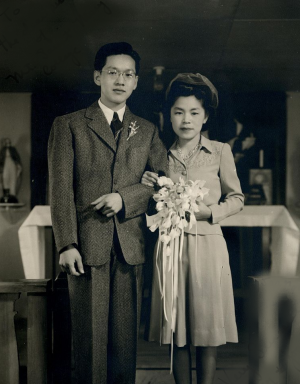 Christian Aquino was born on May 27, 1914 in the Philippines to Alon and Ligaya Aquino.  It is unknown what type of work Alon did, but Ligaya cared for their five children: Juan, Christian, Augustine, Jemina, and Yolanda.

Christian went to high school and then to college and earned a BA in education.  After he graduated, he got a job teaching English literature in a high school near Manila.  In his early twenties, his best friend introduced him to his sister, Anita Salvador, and the two of them began dating.  They dated for a full two years before Christian finally proposed to her.  Years later, he would often tell the story of how he fell in love with Anita right away but that he wanted to be sure.  As it turned out, Anita was a teacher as well, and she continued working even after their four children were born.  Anita’s mother came to live with them and cared for the children while Christian and Anita were working.

Education, then, was obviously very important to both Christian and Anita, and they determined that all four of their children would go to college.  This was difficult, however, as time went on because Anita’s mother began to have health problems.  Thus Anita had to quit working to care for the children, the house, and now her mother as well.  They were still able to put the two oldest children, Emilio and Felix, through college on just Christian’s meager salary, but they realized that it just wasn’t enough to put the two youngest through.

Therefore, after much thought and agonizing, Christian finally decided that he would go to America to try to make enough money to put Gabriel and Isabelle through school as well.  So in 1969, he made his way to Chicago, taking Emilio and Felix with him, and found work.  During the day, he worked in a textiles factory, and at night he worked in a plastics factory and would send the money back to Anita.  Not only was the work difficult, but it was very hard on both Christian and Anita to be separated, as they were a very close couple.  They stayed in contact mostly by writing letters back and forth.  Occasionally, maybe once a year, Christian would travel back to the Philippines for a visit, but he did not go more than that because of the cost.  After eight long years, however, in 1977, both children finished college, and Christian was finally able to retire.  He then sent for Anita and Gabriel and Isabelle to come join him and Emilio and Felix in Chicago.

Isabelle says that their father always referred to himself as a teacher, as if the years he spent working in factories didn’t count.  “He was very proud of being a teacher,” she says, and was an avid reader.  “That was his passion.”  He was also proud, she says, that all of his children went to college and ended up with professional jobs.  Both Gabriel and Felix became teachers, while Isabelle became a nurse and Emilio an engineer.

Once reunited, Christian and Anita got a small apartment on Carroll Avenue and joined a Methodist church near there.  They never traveled except back and forth to the Philippines, where they would stay for several months at a time.

It was during one of these trips that Anita fell and broke her hip.  Relatives called Isabelle to tell her what had happened and to relate that Christian didn’t seem able to handle the situation, saying that he seemed confused and that he was “a bit off.”

Isabelle flew to the Philippines and helped bring her parents back to Chicago, where they went to stay with Emilio’s family while Anita recovered, which seemed the first priority.  Isabelle insisted, however, on also taking her father to a doctor to be examined, as she herself could see the confusion and disorientation that the relatives in the Philippines had told her about.  Sadly, the doctor diagnosed him with Alzheimer’s, which was a crushing blow to the whole family.  All of them were devastated that their “pillar of a father,” who was so intelligent and who had worked so hard for them would soon be reduced to nothing.

Both Anita and Christian remained with Emilio until it got to be too much.  Not only was Christian beginning to wander, with Anita unsteadily trailing after him, trying to get him to come back, but he was beginning to have violent outbursts as well.   So it was that with very heavy hearts, the children all made the decision to place them in a nursing home.

As the only daughter, the arrangements fell to Isabelle, and she chose a place very near to her.  Anita and Christian remained devoted to each other, even in the nursing home, so that when Anita  eventually died, Christian was inconsolable.  According to Isabelle, her father does not fully comprehend that Anita is dead, though he did attend her funeral.  Once back at the nursing home, however, he continued to search and ask for her and grew ever more desperate to find her.  Eventually, he began to lash out and to have “violent episodes,” which the home dealt with by sending him to the psych unit at the closest hospital.  Fed up with this, Isabelle decided to place him in a different home and chose one where she personally knew many people on staff.

At this new home, Christian so far seems calm and exhibits no problem behaviors.  Isabelle comes herself to give him a bath and cut his hair, which seemed to be a source of great agitation for him in the other nursing home.  His sons visit as well, though it is a long drive from where they live.  Christian remains confused and still asks for Anita.  He is either withdrawn, wanting to sit alone in the dayrooms, or is anxious and wanders the halls.  He will participate in activities for a short time, but then will get up and leave.  “It’s tragic,” says Isabelle.  “This is not my father.  He was such a lovely, lovely man.  He could talk to anyone, and he knew so much.”