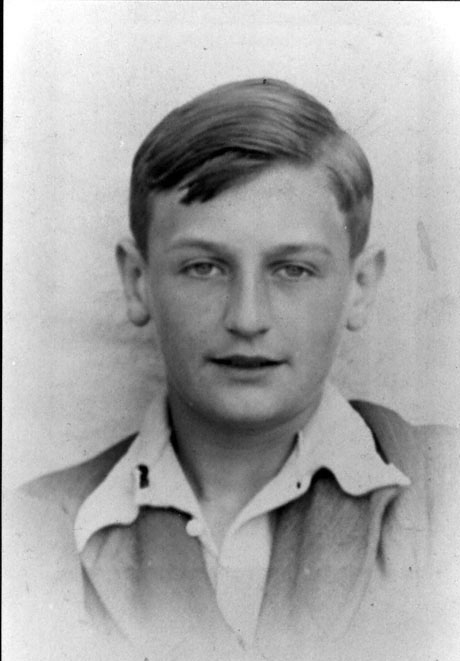 Nelson Pederson was born on July 22, 1931 in Chicago to Emil Pederson and Asta Brahms, both immigrants from Denmark.  It is thought that Emil worked in a factory in Ravenswood, near where the family rented an apartment, and that Asta cared for their two children, Anna and Nelson.  When Nelson was still very young, however, Emil and Asta divorced, and Nelson never saw his father again.

Asta, unable to raise two children on her own in a still-strange city, married a man by the name of David Jaeger and had three more children with him: Louis, Earl and David, Jr.  Nelson did not get along with his new stepfather, whom, Nelson says, was very abusive to him.  Thus, after graduating from eighth grade, Nelson quit school and got a job as a delivery man for the General Rug Company as a way of having some independence from his stepfather.

When he was twenty, he met a young woman, Emily Novak, in a candy store.  They dated for a short time and married.  They had one son, Bertie, but shortly after the baby was born, he and Emily divorced.  Nelson doesn’t like to talk about it much and will only say that they didn’t get along.  He lost contact with both of them, then, like his father had before him, and to this day has no idea where Bertie is.

According to Nelson, he has always been “unlucky in love.”  He married two more times, each one lasting only about a year.  In his forties, he married his fourth wife, Patricia Roth, and stayed with her for ten years before they, too, divorced.  All this time, Nelson spent his life working at various factories or gas stations.  He enjoyed going bowling and to the movies and loved watching baseball on T.V.  His favorite music, he says, is “country and western.”  He did not have a large social circle and spent most of his free time alone.

When he was in his early sixties, he started to repeatedly become ill at work and would frequently have to go home.  Finally, his boss insisted that he go to the doctor, who admitted him to the hospital with COPD and alcoholism.  The hospital staff did not want to release him back to his apartment on his own, but Nelson had no family or friends listed to call.  Finally, Nelson had the hospital staff call a couple who lived near him.  He had apparently met them a few years back in a local restaurant and saw from time to time around the neighborhood.

The couple, Daniel and Ruby Esposito, answered the hospital’s call and came up to see Nelson, thought they were a little confused and surprised that he had no other friends or family to call besides them, as they considered themselves acquaintances at best.  The Esposito’s took pity on him, however, and instead of having the hospital set up care for him in his apartment, they decided to take him into their home.  Nelson was apparently happy living with the Esposito’s for three years, but despite their care, his health grew steadily worse.

Nelson was eventually readmitted to Swedish Covenant and this time additionally diagnosed with depression, personality disorders, and confusion.  It was Nelson’s mental confusion/dementia that was the hardest for the Esposito’s to handle.  Before being admitted to the hospital, he was frequently found wandering the halls of the apartment building or in the neighborhood and several times left the burners of the stove on.  So when he was finally ready to be discharged from the hospital this second time, Daniel and Ruby, who had gotten power of attorney for him when they first took him in, decided to follow the discharge staff’s advice and place him in a nursing home.

Much to their delight, Nelson made a relatively smooth transition to his new home and seemed to be enjoying his new life there until his sister Anna suddenly reappeared in his life.  Nelson had last seen Anna over ten years ago when they had had an argument and consequently lost touch.  Nelson was overjoyed to see Anna again, however, and willingly went with her when she would pick him up from the nursing home for “outings.”  These outings turned out to be trips to the bank in which Anna tried to get Nelson to withdraw money and give it to her. She has also tried to get a hold of his social security check and attempted to force him to sign a new power of attorney, naming her the decision-maker.

When Daniel and Ruby discovered what Anna was up to, they were flabbergasted.  “The joke’s on her,” says Daniel, “because he doesn’t have a cent to his name.”  Daniel and Ruby are urging the staff to put some sort of limit on Anna’s visits, as they claim she is verbally abusive to Nelson—and to them if they happen to be visiting at the same time as her.  They are worried about Nelson’s well-being and don’t want “his last years to be ruined by his insane sister.”

Nelson finds himself caught in the middle.  He has difficulty expressing his feelings, but he seems to be wanting to please both his sister and the Esposito’s, whom he calls his good Samaritans.  He is quiet most of the time and has difficulty communicating with both sides.  He has taken some interest in the activities at the home, which the staff are encouraging him to attend, if only to distract him from his familial troubles and to make some new friends.