They Met at the Roller Rink in Milwaukee 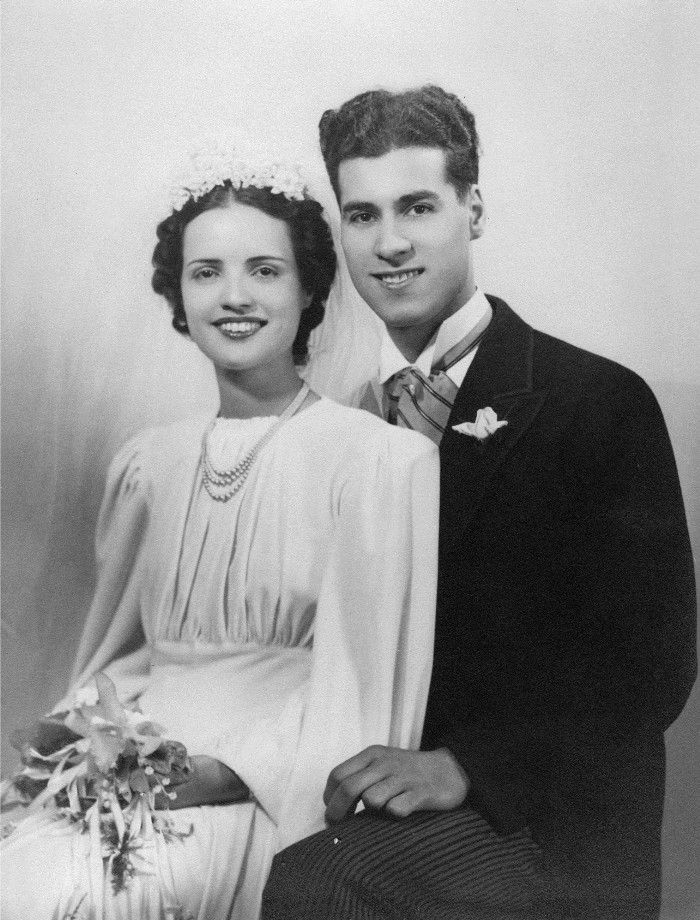 Roger Fulton was born on June 24, 1915 in Chicago to William Fulton and Elizabeth Muller.  William was an immigrant from England, and Elizabeth was Canadian, though it is thought she was of Swiss descent.  It is unknown what type of work William did, but he was reportedly “always sick” and died of pneumonia in 1955.  Elizabeth took care of him and Roger, their only child, and worked as a “jogger,” at a printing house.  Oddly, she died of pneumonia, too, in 1982.

Roger went to school until the tenth grade before he quit to get a job.  He eventually became an industrial photographer at Keogh Printing.  He enjoyed stamp collecting and reading, but his main love was roller skating.  He joined a roller skating club that travelled to different skating rinks in different cities and towns.  It was at a rink in Milwaukee that he met his wife, Fern Dubala.  Even though he was an experienced skater, Roger somehow fell that night, and, as it happened, he went down right in front of Fern Dubala and her friend.  It was Fern that helped him up, and she and Roger spent the rest of the night skating and talking.  Fern, Roger discovered, was of Czech descent and had been born in Milwaukee in 1918.  She had gone to school until the eighth grade and worked as a claims clerk for the Social Security Department.  At the end of the night, Roger didn’t want to say goodbye, but he had no choice but to return to Chicago on the bus with his roller skating club.  Before he left, however, he got a promise from Fern to keep in touch via letters.

Fern kept her promise, and the two of them spent the next year writing letters and getting to know each other.  Twice in that year, Roger took a bus back up to Milwaukee to visit Fern.  The first time he visited, they went on a date to the roller rink where they had met, and the second time, he met Fern’s parents and privately asked Fern’s father for permission to marry his daughter.  When Mr. Dubala said yes, Roger proposed to Fern, and she happily agreed.  They had their wedding six months later in Milwaukee at St. Stanislaus and the reception in the church hall.  From there, they took a honeymoon to Des Moines, where Roger had some cousins, and then went to Chicago to live.

For a while they lived with Roger’s mother, but they eventually bought their own house on Dayton Street.  Roger continued working at Keogh Printing his whole life, and Fern worked as a secretary until she got pregnant, at which point she quit to stay home.  She and Roger had one daughter, Audrey, who now lives in San Francisco with her own family.  Fern says that she and Roger wanted more children, but none came along, which is just as well, Fern states, because Roger developed a variety of serious health problems over the years.  In fact, he had to retire early in 1962 after being diagnosed with multiple sclerosis.

After Roger’s retirement and diagnosis of MS, Fern became his main caregiver, just as Roger’s mother had cared for his father all those years.  “I should have known what I was getting into,” Fern says.  Indeed, Roger’s list of ailments is long and includes diabetes, prostate cancer and possibly dementia.  He also had a stroke in the early 1990s, which left him unable to walk without a walker.  When he recently fell, he was hospitalized for about a week.  It was then that his doctor suggested to Fern that perhaps he should be discharged to a nursing home instead of going home.  Fern says that she was at first reluctant to admit him to a facility, saying that she could care for him at home, but when the doctor told her that he thought she might have a stroke at any time due to the stress she has been under in caring for Roger all these years, she eventually agreed.

Roger is very mild-mannered and soft spoken and seems very dependent, both physically and emotionally on Fern.  He is quiet and withdrawn.  Though he will politely answer questions, he does not elaborate.  He says he does not want to live in a nursing home, but understands why it must be so.  Several times he cried during the admission process.  Fern, in her own way, also seems to be having a hard time, though she has remained very matter-of-fact and unemotional through the process.  She has informed Audrey and has asked her to come out to help, but Audrey is apparently afraid of flying and wants to wait for a couple of months before driving across the country.  Meanwhile, neither Roger nor Fern have revealed a lot about their life together.  Fern says they had a happy marriage, but that they didn’t socialize much or travel because of all of Roger’s illnesses.  She seems weary and despondent herself, saying that perhaps she should come and live at the nursing home, too.  She has no hobbies, she says, and no friends and doesn’t know what she will do without Roger at home.