They Brought Her Home and Put Her in a Warm Oven 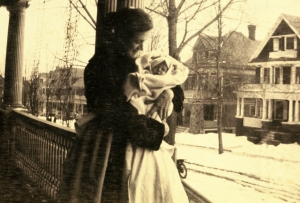 Felicia Billings says she began life at a mere two pounds on March 17, 1915. She was born prematurely in Milwaukee, Wisconsin to Irenka Jasinski,  a Polish immigrant who worked as a seamstress, and Lutz Mueller, a German truck driver, one of six or eight children; Felicia isn’t sure.

Apparently, the moment Felicia was born, barely alive at two pounds, her family rushed her across the back alley to St. Joseph’s to be baptized. She survived the baptism, however, so the family brought her back home and put her in the warm oven, her mother only supposedly removing her to feed her and occasionally place her on the seat of the rocking chair to be rocked. Though stories like this abound from that era and have been debunked as myths over the years, Felicia insists that hers is true. At any rate, she miraculously lived.

When she was three years old, the family moved to Chicago. Felicia went to school until eighth grade and then went to work as a nanny and a maid for a Jewish family. According to Felicia, the family treated her “beautifully—like one of their own.” It was Felicia’s job to care for the woman’s new baby and to be her personal maid. She was allowed one day off per week, which she usually spent at the roller rink.  The family even offered to drive her there each week so that she wouldn’t have to take the bus.

Though she loved her job, Felicia eventually left to go work as a sales clerk at Goldblatts, where she met a young Jewish man, Stanley, and fell in love. They dated for several years and wanted to get married, but Stanley’s mother refused to allow it. They broke up, then, and Stanley married a young, wealthy Jewish girl. Felicia was happy for him and wished him well, despite her own heartache. She was unexpectedly vindicated one day, however, when Stanley’s mother came in to Goldblatts and admitted to Felicia that she had been wrong about her, but it was obviously too late. Felicia continued to get bits of news about Stanley over the years by writing letters to his sisters and says that she was never bitter about how it all turned out.

Eventually Felicia met another clerk at Goldblatts, Leonard Billings, a young man of English and Italian descent, whom she fell in love with and married at the Justice of the Peace. Fifty years later they had a big anniversary party and got re-married in the Catholic Church.

According to Felicia, she and Leonard had a wonderful life together. Leonard became a manager at Goldblatts and worked there for over fifty years. Felicia continued working there as well, even after their only child, Karen, was born. Felicia and Leonard went everywhere together, their only time apart being during WWII when Leonard enlisted and became a tank driver. Felicia reports that he was “a good soldier” and “came through it fine,” though he was injured in the heel and sent home.

Once back, he and Felicia picked right up where they left off and enjoyed going out to restaurants, bars and parties. Sometimes Leonard and Felicia would split up for the early part of the evening, each going to a friend’s house or a bar, before meeting up later to go somewhere together. They were actively involved in the American Legion for over thirty years and went to conferences all around the country. They had many, many friends.

Felicia continued to work at Goldblatts for most of her career and went out with her two work friends every Tuesday night for seven straight years before she retired at age 62.   From there, she took a job at the American Medical Association in their accounting department and is proud of the fact that she learned to use a computer while there.

Sadly, Leonard died in his seventies of cancer after a long, painful fourteen months, which Felicia nursed him through. At 81, Felicia misses him still. She remained active after his death and is very proud of the fact that she learned how to use a computer. She had been living independently in an apartment above her daughter, Karen, but began falling and was eventually admitted to a nursing home. “Karen thinks I hate her for putting me here,” Felicia says. “I don’t hate her, but it is very hard to get used to.”

Though Felicia is finding the adjustment hard, she remains happy-go-lucky and says that “I enjoyed life tremendously!”