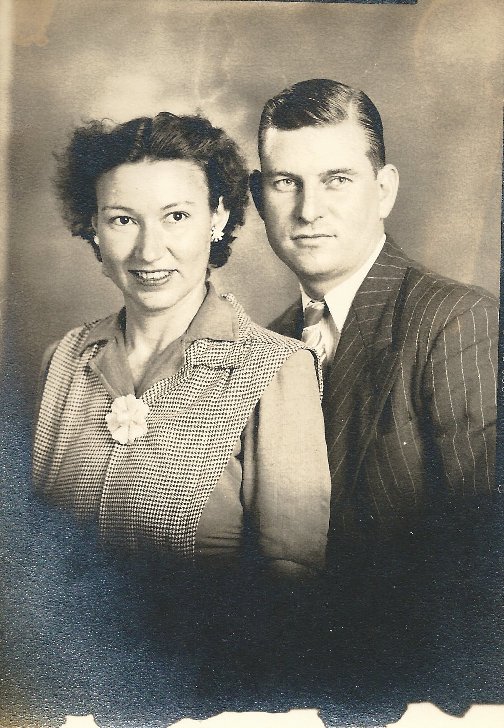 Irving McDonald was born on April 2, 1915 in Chicago to Wesley McDonald and Lucille Rickert.  Wesley was born in Pennsylvania but at some point moved to Chicago and began working as a mail carrier.  Lucille was a Chicago native and stayed at home with their five children, of whom Irving was the oldest.

From a young age, Irving showed a love of music and proved to be very talented in teaching himself to play various instruments.  He wanted to pursue a music career, but his parents convinced him that this was not a good idea.  Instead, he graduated from Roosevelt High School and took a job as a mail carrier like his father, Wesley, and his younger brother, Ralph.  He worked hard at it, however, and was eventually promoted to supervisor.

As a young man, Irving was very social and often went to movies or to dance at the Aragon, and occasionally asked a girl out on a date.  He was a very polite, well-spoken young man and very handsome.  On one particular night, he happened to be out with a young woman by the name of Bessie and her friend, Eunice, and her date, Bill.  Before the evening was over, however, Bill and Eunice got into an argument, so Irving and Bessie offered to take Eunice home.  On the way, something sparked between Irving and Eunice, and he later asked her out.  They began dating in earnest, then, and eventually married.

Irving and Eunice’s first year of marriage was spent in an apartment on Damen Avenue.  Not long after, however, Irving’s father decided to put the family two-flat on Harding Avenue up for sale.  This is where Irving and his siblings had grown up, and they were reluctant to see it go.  Irving and his brother, Jack, decided to buy it, each of them taking one of the flats.  Because of this, Irving and Jack’s children grew up together and are very close, even now.

Irving and Eunice had four children: Tom, Pauline, Marjorie and Edward.  Over the years, Eunice worked at night as a key-punch operator at various factories and took care of the kids during the day.  Irving and Eunice loved traveling and wanted to share that love with their children, so they took many trips as a family all around the United States, usually in the form of camping.  Even after the kids all moved out, Irving and Eunice continued to travel and went to Europe and even enjoyed an Alaskan cruise.

When Irving eventually retired from the post office, he found it hard to sit home and do nothing, so he took a job in the mail room at Walgreens.  He was very active in his parish, Our Lady of Mercy, and was a member of the Holy Name Society, who named him ‘”Man of the Year” in 1977.  He was also part of the St. Vincent De Paul society and was active leader at the YMCA.   “He was an all-around good guy,” his son, Ed, says of him.  “He’d do anything for you.  Give anyone the shirt off his back.”

Irving had many hobbies, but his real love remained music.  Not only could he play the piano, organ, guitar and accordion, but he was a very talented singer.  He belonged to various groups over the years, many of which performed at bars, parks, festivals and nursing homes.  In fact, back when he was a mail carrier, he had a reputation in the neighborhood of whistling or singing as he delivered mail and was thus unofficially dubbed “the singing postman.”

In the mid-1980s, Eunice was diagnosed with a brain tumor, and Irving cared for her at home, with the help of a nurse, until she passed away in 1986.  After Eunice died, Irving continued living alone in the two-flat on Harding and was very independent.  He had very few health concerns and had a lot of hobbies and interests and went out to the grocery store every day.

It took everyone by surprise, then, when Irving had a stroke in February of 1994 and was hospitalized for several weeks.  He is currently paralyzed on the left side and is mostly unresponsive.  His children finally made the decision at the time of his discharge from the hospital to put him in a nursing home on the advice of his doctor.  Ironically, his children chose to admit him to the Bohemian Home, which is one of the nursing homes he had often performed at with various singing groups so many years before.

Because he is unresponsive, it is impossible to gauge Irving’s adjustment to this new setting.  His children faithfully visit him and seem to be having a hard time accepting their father’s condition and prognosis.  They are still hoping he will recover and be able to go home.