“The Love We Have for Each Other is Secret” 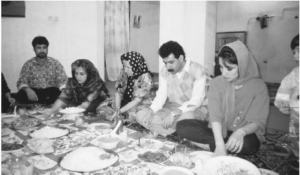 Rahat Karim was born in Jerusalem on October 28, 1939 to Abdul Karim and Basma Nejem.  There were four children in the family, 3 boys and one girl.  Rahat went to the equivalent of elementary school and learned the basics, which consisted mostly of reading and writing.  He then began working in a factory.  When he was twenty-five years old, it became time for him to marry, so his father began looking for a bride for him.  He approached a man he knew and proposed that Rahat marry his daughter, Halima, who was fifteen.  The man took time to consider the match, but he eventually agreed to it.

Rahat and Halima met each other for the first time at their wedding ceremony.  They set up house, then, and by the next year, when Halima turned sixteen, she gave birth to their first child.  Over the next couple of years, the fighting between the Palestinians and the Jews grew so intense and dangerous in Jerusalem that Rahat decided to move his family to Jordon, where he again found work in a factory.  He was required, however, to serve in the Jordanian Reserves for two years.  Halima went on to have seven more children.

In the 1970’s, one of Rahat’s brothers wrote to him from the United States, urging him to come and find a job.  Finally, Rahat decided to take a chance and made his way to Chicago, where he worked for a year and half to save enough money to bring Halima and their eight children over.  Once in Chicago, Halima had yet another baby at age thirty, which was her last.

The Karim family moved several times to various apartments and finally settled in Lawndale where they became part of an Arabic community.  Rahat loved meeting up with friends to discuss many different political and social topics, which could become quite heated at times.  He also loved music, drinking coffee, and eating donuts.  Rahat, says Halima, was always a hot-tempered type of person.  “He was big and strong and always had to be the boss.”  When asked about their relationship, Halima says, “The love we have for each other is secret.”

Sadly for the Karim family, Rahat has recently had some sort of stroke and/or seizure.  While at home, his hand began to shake and he could not speak, so Halima called for an ambulance.  At the hospital, Rahat had eight more seizures and is now is a semi-comatose state.  Halima says that the doctors told her he has a rare disease that causes the blood to become too thick and the veins in the brain to shrivel.  He is at times able to open his eyes and can only slightly move his right arm.

After two weeks in the hospital, Rahat was discharged to a nursing home, but his prognosis is not clear.  His large family is ever present in the nursing home, with someone sitting in his room with him around the clock.  They remain very devoted to Rahat and insist on being part of his care, which at times is somewhat disruptive.  The family has been reminded many times to follow the facility rules, but they are constantly breaking them.  When they are reminded, they claim to have not ever been told or that they forgot.  They insist that Rahat is communicating his needs and wishes to them through his eye movements and small hand movements, but the staff have so far not been able to accurately access his cognition.

Halima remains the most often and rarely leaves his side.  She seems in denial that this is a permanent placement for Rahat, and talks often of her plans for them once he comes home.