The Happy Life of Enid and Michael Walsh 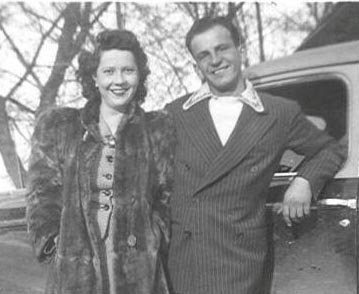 Enid Walsh was born on July 10, 1911 in Rend City, Illinois to Bryn Sayer and Nesta Vaughn.  Bryn and Nesta were from the same mining village in Wales and married there.  Before they started a family, however, they decided to immigrate to the United States, having heard of mining work from other villagers who had made the journey.  Thus, on the advice of friends and relatives, they settled in Rend City, where Bryn was able to easily get work in the mine, having been a miner in Wales since he was a child.  Nesta, meanwhile, stayed home and took care of the five children they eventually had: David, Enid, Evan, Reece, and Steffan.

At some point, Nesta’s sister, Mary, and her daughter, Helen, came to live with the Sayer family after Mary’s husband died in a mining accident in Wales.  Not long after they arrived, however, Mary passed away, leaving Helen an orphan.   Bryn and Nesta took her in permanently, and she and Enid became like sisters.

When she was twenty-eight, she met a young man, four years her senior, at a church picnic.  Her cousin, Helen, had since married and moved to the nearby town of Valier, and she often invited Enid to come stay with them for the weekend.  On one particular weekend, Enid accepted as usual, glad to have something new to do, and on the Sunday accompanied Helen and her husband, Harry, to church.  After church, a picnic was held, and it was there that Enid met Michael Walsh, who was of Irish and Czech descent.  The two hit it off and sporadically dated until Michael showed up one day in Rend City to ask Bryn for Enid’s hand in marriage.  Bryn said yes, and then Michael went and proposed to Enid.  They were married two months later.

Enid and Michael began married life in Rend City, but then moved to Valier, not too far from Helen and Harry.  Michael was also a miner and worked in the same mine as Enid’s father and brothers.  When the miners went on strike, however, part of the mine was closed down, and Michael found himself out of a job.  Rather than stay to see if he would ever get his job back, Enid and Michael made the decision to move to Chicago to try their luck there.

The Walsh’s took a room at a boarding house on Division, and Michael immediately found work driving a truck.  He relished this new job, free of the mines, and eventually worked hard enough to start his own truck driving business and to buy a house on Wolcott Avenue.  Meanwhile, Enid found work in a factory until she got pregnant with their first child, Doris, and then quit to stay home.  Enid wanted more children, but she did not get pregnant again for another ten years and then had another daughter, Patty.  Enid loved being a housewife and a mother and also enjoyed reading, bowling and bingo.  She says that she and Michael would often go for rides in their car, which they were very proud to own, or just enjoyed talking together.  “We didn’t need to go out much,” she says.

The girls eventually married and moved out, leaving Enid and Michael to potter about on their own.  Michael sold the truck business in 1979 and retired.  The two of them took a couple of trips, one to St. Louis and one to Miami, over the years.  They mostly enjoyed gardening and visiting with their grandchildren.  Both Enid and Michael remained in relatively good health until the early 1990’s when Enid began having small strokes.  She was hospitalized each time but was always able to return home to Michael with the help of a live-in caretaker whom Doris and Patty had hired.  According to Doris, however, both of them continued to get more and more forgetful, which worried the girls and prompted them to continue to urge their parents to move into a nursing home.  Both Enid and Michael have consistently refused, however, denying that there was any need.  When Enid fell on Christmas Day, 1994, however, and broke her hip, the difficult decision was finally made to take her to a nursing home.

Enid is making a slow recovery with her hip, but seems in relatively good spirits.  She is a very sweet, quiet woman who is eager to please and follows every direction of the staff to the letter.  She wants to go home, however, and does not accept that this is her new permanent home.  She misses Michael very much, and is sometimes confused about why he is not here with her.

Michael, for his part, is very distraught and lonely without Enid at home and has slipped into a depression.  Doris and Patty are taking turns going to pick him up and taking him to visit Enid once a week, as it is difficult for them to drive in from the suburbs any more than that.  Doris is in her sixties and is also caring for her mother-in-law, who lives with her, and Patti is still working and also caring for four children.  Each time they bring Michael to the nursing home for a visit, he doesn’t want to leave Enid, but when his daughters suggest that he move into the home with her, he refuses and begins to cry.