“That’s What Happens When You Fly Too High…” 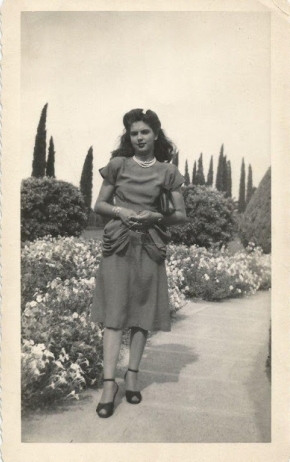 Ruby Fessler was born in Chicago on September 16, 1937 to Rudi Fessler, an immigrant from Vienna, Austria, and Ida Beldy, an immigrant from Hungary.  Rudi worked for a trucking company.  Ida cared for their four children and was also a breeder of Shih Tzu poodles.  Ruby graduated from high school, but says she didn’t have any use for school, especially since she began working as a model at age twelve.  She modeled primarily for Sables and Pat Stevens.  Though she didn’t really like it, the money helped to support the family, and her mother made her continue.

When she was eighteen, Ruby entered a beauty contest at a night club in Logan Square and won.  The management was so impressed by her that they offered her a job managing their “Opera Club.”  It was at the night club that the young Ruby met Roger Kipman, a real estate broker who was, in her words, “a real mover and shaker.”

Roger soon took a liking to Ruby, who claims she married him “under duress” at age 24.  After they were married, Ruby says she discovered that he had been indicted three times for six million dollars in government and international theft.  Roger tried to get Ruby to sign some of his money into her name to help hide it.  When she refused to cooperate, Roger beat her.  Ruby says that she was hospitalized three times during their two-year marriage and that the stress and physical abuse left her permanently disabled.

Ruby says she was finally able to get away from Roger Kipman and filed for a divorce, though Roger vowed he “would always be around to get even with her.”  The government apparently offered her political asylum, as did five other embassies, as Roger’s thefts included international schemes and bank accounts.  According to Ruby, several of the employees she met with at the embassies claimed that they had never seen a woman so abused.   “But,” says Ruby, “that’s what happens when you fly too high.  You get your wings clipped.”

For many years, Ruby had a quiet life with her mother and took many trips around the country with her.  She also loved music, art, gardening, and studying ancient cultures.  She even took a few classes in ancient history at the local community college because she was so interested in this subject.  Though she did go out from time to time to the various “private clubs” of which she was a member, she tried hard to keep a low profile, as she was afraid that Roger was still out there looking for her.

When Ida passed away in 1990, Ruby moved into her own apartment.  She had little money, however, and was forced to live in “slum apartments, surrounded by gangs, drug addicts and thieves.”  Ruby somehow blames all of this on Roger, saying that because he was a “slum landlord,” he made her life a hell and had “bad people” follow her from apartment to apartment.  At some point, she reached out to her brother, Steven, who helped her find a decent apartment and stopped over from time to time to check on her.

Regardless of the better neighborhood, Ruby, it seems, was still not safe.  In 1992, four men apparently broke into her apartment and attacked her.  They beat her severely, breaking one of her arms, a leg and her spine, and leaving her for dead.  When Steven eventually stopped by a few days later, he found her lying unconscious and called for an ambulance.  Though she cannot prove it, Ruby is convinced that Roger was behind the attack.  She despairs that he was never brought to justice, first because she could never prove that he was involved, and secondly because she has since heard that Roger was killed shortly after the incident in a street fight.

Ruby spent over a year in the hospital recovering and was then released to a nursing home, where she spent another two years.  In that time, her brother, Steven, died, and she very much grieved for him.  Ruby claims that she put her name on a waiting list at the nursing home to be moved into an assisted living apartment when one became available.  After two years, she inquired about her status on the list and discovered that her name had never been added.  Furious, she transferred to a different nursing home with the help of her sister, Peggy, who had been living in California but who had relocated to Chicago just after Steven died.

Peggy has helped Ruby with her admission to this current nursing home, but she is very antagonistic to the staff and is at times verbally abusive.  She appears to be somewhat mentally unstable herself and makes unrealistic demands on Ruby’s behalf.  Ruby, however, though she tolerates Peggy’s presence, is quick to point out that Peggy has no authority over her and cannot sign any documents for her.  They have never been close, Ruby says, and adds that “we don’t get along.”  When asked about Ruby’s somewhat fantastical history, Peggy will not comment except to confirm that her sister was indeed beaten.  With no children and no other living siblings or friends to question, there seems to be no way of easily corroborating Ruby’s story.

The previous nursing home provided some clues, however, saying that Ruby has a history of schizophrenia and suffers from panic attacks.  They were also somehow able to determine that previous to her last hospital stay, she had been living alone in dirt and filth and that she had come in to the hospital with many bedsores.

Ruby is very alert and aware of her situation, but seems withdrawn and unmotivated.  She does not appear to have any interests in the life of the home and does not interact with other residents except to ask them for cigarettes.  She will engage somewhat in conversation with staff if prompted.  She looks forward to Peggy visiting, but when she does come, they usually end up arguing.