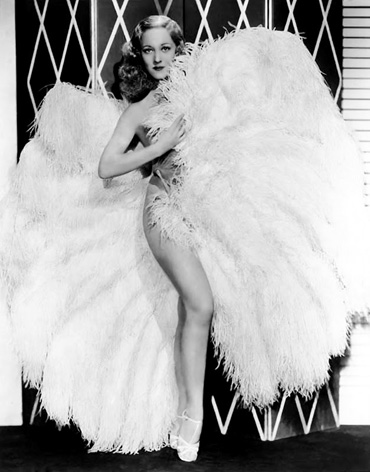 The first burlesque dancer in Chicago could arguably be considered to be Fareeda Mahzar, later known as “Little Egypt,” who danced at the World’s Columbian Exposition of 1893 and was acknowledged as “the first of the sensational girlie dancers.” Similarly, at the 1933 Century of Progress World’s Fair, also held in Chicago, Sally Rand caused a stir with her ostrich feather fan dance and her infamous balloon bubble dance. She was arrested four times in a single day during the fair due to perceived indecent exposure.

American burlesque began as a form of variety show, melding together elements of Victorian burlesque, music hall and minstrel shows in which pretty women showed off their figures while singing and dancing, sometimes involving elaborate, revealing costumes. Exotic “cooch” dances, resembling belly dancing, were also brought in. Eventually, the ensemble ribald variety performances gave way to the striptease, which became the dominant feature of burlesque by the 1930’s, the period in which the main character, Henrietta Von Harmon, from the novel, A Girl Like You, finds herself inadvertently employed at the fictitious Marlowe Theater.

Two of the more famous, actual Chicago Burlesque theaters, both located on State Street, however, were the Rialto Theatre and the Follies Burlesque, which was originally known as the London Dime Museum in 1890, and which featured a vaudeville house on the main floor and an “oddities” museum on the upper floor. In 1908 it was renamed the Gem Theater and began running burlesque shows as early as 1916. At the time, a Mrs. Guy Blanchard, the leader of the Political Equity League complained that the dancing girls at the Gem were “drug fiends” and claimed that there were small rooms under the stage where the girls would go to get high.

In response to this attack, one of the dancers actually published a letter in the Feb. 1, 1916 edition of the Chicago Tribune saying that the “girls who dance at the Gem theater work there and do the dances they do because by doing so they can make a living.” By the early ‘50’s, the name of the theater was again changed to The Follies Theater, or the Follies Burlesque.

By the late ’30’s, however, a social crackdown on burlesque shows across the country began their gradual downfall, putting most of them out of business by the ‘40’s.