Surrounded by Angels…And One Devil 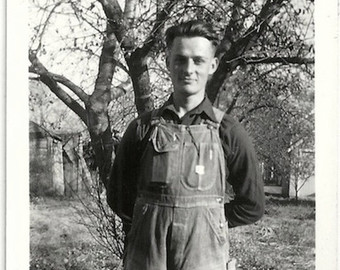 Gerald “Jerry” Dziedzic was born on October 25, 1909 in Braddock, Pennsylvania to Wojtek and Paula Dziedzic, both immigrants from Poland.  Not much is known about Jerry’s early life, except that he was the youngest of seven children and that his father worked as a laborer in a factory.

Jerry went to school on and off until the eighth grade, and, later, as a young man, somehow made his way to Chicago to find work.  He ended up working south of the city, which at that time was still farm land.  He met Flora Glab at a baseball game, and the two married a few months later.  None of Jerry’s family even knew about the happy event and thus did not attend.

Jerry found work at a trucking company, and Flora worked in a radio factory until their first child, Marjorie, was born.  According to Jerry, Flora “wasn’t quite right” after Marjorie’s birth and became very unhappy.  Within months, she packed up her things and the baby and left Jerry, though he never really understood why.

Flora did not tell Jerry where she went, but he attempted over the years to trace her or Marjorie.  He eventually found out that Flora had placed Marjorie in foster care when she was very young and that Flora herself had since died.  Marjorie was fifteen by the time Jerry finally located her.  He applied to have her come and live with him and his new wife, Lillian Novotny.  Jerry hoped to make up for all of the lost years, but Marjorie was shockingly disruptive and “wild” and very antagonistic to Lillian.  Eventually, Lillian could no longer take Marjorie’s antics and threatened to divorce Jerry if he didn’t do something with his daughter.  Jerry, not wanting to estrange his daughter after all these years, chose to do nothing, so Lillian left him.  Jerry then tried to build a new life with Marjorie, but as soon as she was eighteen, she got married and moved away.  After she left, Jerry lived alone for many years and worked as a truck driver.

For a long time, Jerry’s only friend was a Greek woman by the name of Dora Simonides, who lived in the apartment next to him.  Dora apparently had problems with her children as well, and she and Jerry often commiserated together and occasionally went out to keep from being lonely.  One day out of the blue, Dora asked Jerry to marry her, and he said yes.  The two friends did not have a long time together, however, before Dora was diagnosed with early Alzheimer’s.  Jerry tried to care for her on his own, but it eventually got to be too much.  So with a heavy heart, he admitted her to a nursing home, at which point Marjorie reappeared after being absent from Jerry’s life for years.  She had apparently heard of her father’s remarriage and Dora’s admission to a home and had thus turned up to demand her share of her father’s money before it was “sucked up” by Dora’s nursing home expenses.

Wanting to please her and keep her in his life, Jerry agreed to give Marjorie $43,000 of his savings and to take Dora back home to care for her there rather than spending all of his and Dora’s—now Margorie’s—money on a nursing home.  Jerry reluctantly cared for Dora as best he could, though he was seventy-eight himself, until Dora died in 1987.  At the time, he was still working as a maintenance man at Lincoln West Hospital, where he had worked for over two decades.  He finally retired when he was eighty, at which point, Marjorie convinced Jerry to move to a senior apartment, Lawrence House, and to buy her son, David, a trailer home.  Jerry was again reluctant to leave his apartment where he had had some happy years with Dora, but he was afraid to disappoint Marjorie. Thus, he sold all of his furniture and gave the money to Marjorie and David and then moved into his new studio apartment at Lawrence House.  He was crushed, then, when, after he gave Marjorie the last of his money, she promptly disappeared.

Alone again, Jerry often went to the Levy Senior Citizens Center to socialize, as he had absolutely no one else in his life.  At the Levy Center, he met a volunteer, Evelyn Harris, who “had a smile for everyone.”  Evelyn befriended Jerry and often went to visit/check on him at his apartment in Lawrence House.  The first time she went, she was appalled by the squalor in which Jerry was living.  She had suspected something was wrong because his clothes were always dirty and ill-fitting, but when she got to his apartment, she saw that the whole place was dirty, particularly his bed, and that he had no dishes or utensils or food of any kind.  Feeling sorry for him, she took him home to live with her.  Apparently, it was a happy arrangement, but, again, short-lived, as Jerry then had a heart attack and two strokes.

After his second stroke, the hospital staff where he had been admitted tried to convince Evelyn to place him in a nursing home, but she refused.  It didn’t take too long, however, before she realized that she had made a mistake and that caring for Jerry was now too much.  With a long-time friend, who also knew Jerry from his days at Lincoln West, Evelyn found and placed Jerry in a nursing home.  Only once did Marjorie materialize to visit him, during which time she—as usual—caused havoc between Jerry and Evelyn.  Jerry fought with Evelyn, telling her to stay away and not to visit as much, as it was causing Marjorie not to come around.  Evelyn was extremely hurt by this and stayed away for a time, until she “came to her senses” and decided to confront Marjorie.  Marjorie had long since gone, however, so there was no threat for Evelyn to have to face.  Evelyn and Jerry made up, then, and she continued to faithfully visit him.

Things went on this way until 1996, when Evelyn went through routine knee surgery and unexpectedly died.  This was very hard on Jerry, though his cognitive status by that point had diminished considerably.  With the help of the nursing home staff, he attended Evelyn’s funeral and there met yet another guardian angel, Katie, who was Evelyn’s granddaughter.  Katie of course knew about her grandmother’s friend, Jerry, to whom she had devoted so many years, but she had never met him.  Before she died, Evelyn had managed to extract a promise from Katie that she would continue to look after Jerry for her.  Katie took her promise very seriously and made frequent visits to the nursing home in the city to see Jerry, though she lived forty miles away in Elgin.  After a time, Katie asked Jerry if he would consider moving to a nursing home closer to her so that she could see him more, and he eagerly agreed to it, so much so that he became almost obsessed with leaving and pestered the staff constantly to make it happen, which they eventually did.

Once established in the new nursing home, however, Jerry soon soured toward it and begged to be taken back to the nursing home in the city where he had been.  Katie gave him some time to get adjusted, but he remained adamant in wanting to return.  Finally, then, Katie made the arrangements for him to be transferred back, reminding him repeatedly that she would not be able to visit as often.

Jerry is making a relatively smooth transition back to his former home, though he seems depressed much of the time.  His cognitive and physical health continue to decline, and he has begun to repeatedly ask for Marjorie.  Katie, for her part, is glad that Jerry is back at his original nursing home, but says that it is difficult when he constantly brings up Marjorie.  “She’s a real devil, though Jerry just can’t see it,” she says.  She has tried several times to contact Marjorie, at Jerry’s request, but she has failed to ever return Katie’s calls.