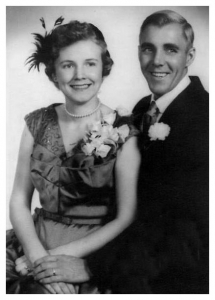 Winifred Hughes was born on June 1, 1905 to Italian immigrants and was one of eleven children.  Winnie attended grammar school until she was just nine years old when she came down with an unknown childhood illness that left her deaf.  She did not receive any schooling after that and taught herself to sometimes read lips.  She stayed at home and helped her mother with all of the children, watching as each one grew up and left home, longing to be one of them.

Finally, in her twenties,Winifred was able to find a job outside the home at Hart, Schaffner and Marx as a bastings remover, a job she enjoyed very much.  Her life continued uneventfully, her time off from work still being taken up mostly with duties at home.  When she was in her late thirties, however, everything changed for Winnie.  She met a man at work, Montgomery Hughes, who was thirteen years her senior and in charge of all the tailors.  Winnie fell madly in love with him, and they eventually married.

Montgomery and Winnie never had any children, the family’s belief being that they purposely prevented it because Winnie would not be able to hear the babies cry.  Instead, they devoted themselves to their nieces and nephews and delighted in having them come and stay from time to time.  Winnie taught them to play Crazy-8’s and was always happy and fun.  The nieces and nephews spent every New Year’s Eve at Uncle Montgomery and Aunt Winnie’s house, who always had lots of fun things planned for them.

For a time, one of Winnie’s brothers, Mario, came to live with them when he was discharged from the war after developing Parkinson’s.  Winnie and Montgomery generously cared for him until he died.  According to the family, Winnie and Montgomery had a very happy life together and were very much in love.  Winnie loved baking, sewing, and gardening – her specialty being fruit trees.

When Winnie was 52 and Montgomery 65, the couple decided to retire.  Eventually they moved to a retirement community in LaPorte, Indiana, but they were only able to enjoy it for a few years before Montgomery passed away.  Winnie stayed at the retirement home for a little while on her own before deciding to move back to Chicago, where her nieces, Dorothy and Jean, could look in on her.

Winnie has remained very healthy until age 81 when she broke her left foot, causing her to go and live with Dorothy for a time.  Unfortunately, however, she broke more bones in her left leg and even her left hip.  Winnie was then confined to a wheelchair while her leg healed, during which time Dorothy had to care for her full time, despite the fact that her own health was not very good.  Eventually, Dorothy just couldn’t cope with the situation, so there was no choice but for Winnie to go to a nursing home.

Winnie seems to have made the adjustment  as well as can be expected.  At times she seems depressed and withdrawn in her room, but at other times enjoys sitting in the day room reading the newspaper from cover to cover or visiting with Dorothy’s daughter, Bonnie, who lives nearby.  For the most part she remains the very happy, positive person she has always been all her life.  Her family says that she was always in a good mood, never stressed or upset by anything.  She took life as it came and enjoyed whatever it brought.

Winnie looks forward to visits from Bonnie, who is able to communicate with her in their own way, as Winnie never properly learned sign language.  Her deafness prevents her from interacting with the other residents or participating in activities.  Though Winnie never speaks except to sometimes say a garbled “I’m mute” to people who attempt to talk to her, she is still, amazingly, able to sing, in Italian, the songs her mother once sung to her as a little girl.