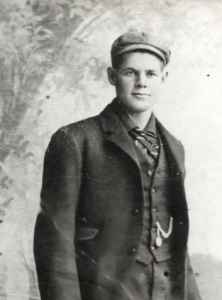 Waldemar “Wally” Karlsson was born on February 2, 1899 in Sweden to Ralf Karlsson and Beata Berglund.  Ralf was a farmer, and Beata cared for their ten children: Olov, Njord, Melker, Carola, Ebba, Waldemar, Breta, Niklas, Ludvig and Hulda.  As a young boy, Wally learned to play the violin and was often chosen to play in the church choir.  When he was nine, he began a carpentry apprenticeship, which he attended once a week after school until he achieved full carpenter status at age fourteen.  He left school then and began working on neighborhood farms as an extra hand doing odd jobs.

At one point, Wally was required to join the Swedish Calvary, but he only had to serve for nine months, as there were no wars going on at the time, he says.  When he was nineteen, he became the manager of a very large farm that belonged to a sort of governor.  After working for this man for only a year, however, Wally quit because he thought him very mean and greedy.  Wally then went back to his father’s farm and asked to manage it. His father, deeply in debt, agreed to let Wally take over. Wally’s first decision was to cut and sell the lumber from the acres of woods on the farm, which quickly cleared the debt and made the farm successful.

Wally worked for his father until he was 27, at which time he decided to strike out on his own and left for America with his brother, Niklas. Their older sister, Carola, had already immigrated to Denver, while their brother, Olov, had gone to Chicago, where he lived with his wife, Norma, and their two daughters. Wally and Niklas made their way to Chicago and stayed with Olov and Norma during their first summer in America.  Wally immediately found work as a carpenter, but Niklas went from job to job.  After several months, Norma suggested that the two brothers get their own place, as cooking and cleaning up after the brothers, especially Niklas, was becoming too much work for her.

Wally liked and respected Norma very much, so when she gently suggested that they leave, he responded immediately, not wanting to upset her.  He went out and found a nearby apartment for himself and Niklas, where they lived together for three years.  Niklas, it seems, never really settled and made some very undesirable friends.  He was constantly in trouble, and tensions rose between him and Wally.  Finally, it became apparent that one of them would have to go, and since Niklas was wanted by some shady characters throughout the city, anyway, it was decided that he should be the one to leave—and not only the apartment, but the city as well. He made his way to Denver to live with Carola, where he reportedly created havoc there, as well.

Meanwhile, Wally continued working as a carpenter, doing odd jobs, until the Depression hit and he found himself unemployed and hungry. At one point he went for eleven days without eating because he was too proud to ask for food. Eventually a friend offered to try to get him a job as a dishwasher in a restaurant. Wally felt ashamed to have to rely on someone else to get a job, but in desperation he reluctantly followed his friend.  At first the manager of the restaurant refused to hire him, saying that at age thirty-one, Wally was too old, but he later changed his mind.  Glad of a chance, Wally worked extremely hard and impressed the owner so much that he offered Wally a job as the head maintenance man for his thirteen restaurants. Wally gladly accepted and worked for this man for over thirty years.

Wally had many sweethearts in Sweden and America, but he never married. He saw so many poor families over the years, he says, that he was determined not to have a family himself if he could not provide for them, and he always felt he could not. Instead, he traveled extensively with his boss, who was the master of a Masonic Lodge and who was very wealthy, and his family.  Often, Wally went on vacation with them.

After working for thirty years for this man, however, Wally decided it was time to step down, as the responsibility for managing thirteen restaurants was getting to be too much.  He then took a different maintenance job in the early 1960’s at an office building at Lincoln and Belmont, where he stayed for many years.  After that, he became the maintenance man at the building he lived in in Logan Square until he was in his eighties.

Finally retired in earnest, Wally pottered around his apartment and still tried to do some carpentry work here and there.  He loved listening to the news on the radio and reading the newspaper.  His primary function, however, even into his nineties, was to run errands or go shopping for “the old boys”—men who were years younger than himself who lived in his apartment building.  No matter how bitter or cold or hot it was, Wally never failed to go out and pick up items for “the old boys” and bring them back.  He never locked his door and says he had no fear of walking the streets of his neighborhood at any time of the day or night.

Occasionally his niece, Ann Fogar, would telephone him from her home in Arlington Heights to check on her Uncle Wally, but, she says, he never once asked for help from her or her family.  (Incidentally, Ann was one of Olov and Norma’s little girls whom Wally and Niklas lived with for a time when they first arrived from Sweden.  Ann was just a baby at the time.)  Ann says she has tried over the years to include her uncle in family gatherings, but he stubbornly refused to “bother them.”  Recently, however, Wally’s neighbors telephoned Ann to report that Wally was very sick.  Herself in a wheelchair now, Ann sent her two daughters to the city to check on him, where they found him feverish with what turned out to be pneumonia and delusional, as well.  They telephoned an ambulance, and he was hospitalized for several weeks.  From there he was discharged to a nursing home.

Wally seems to be making a relatively smooth transition to his new home, but he doesn’t see himself living here for very long, he says, nor does he believe that he will ever be allowed to go back home.  Instead, he expects to die very soon—”in a couple of weeks,” in fact—and plans to accelerate this by beginning to “breathe very slowly,” which he believes will facilitate his death.  Despite this rather morbid plan, however, he has taken up playing the violin again and loves to seek out other residents with whom to have debates regarding politics or religion, or any topic, really.  He is very knowledgeable and is an incredibly positive, cheerful, sweet man who seems much younger than his ninety-five years.