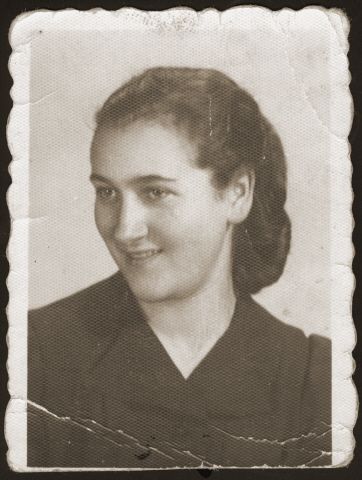 Hana Jezek was born on September 25, 1922 in Brezova, Czechoslovakia to Bartholomew Jezek and Irena Vedej.  Bartholomew was a soldier and was always on the move with the army.  It was in one of the little villages he traveled through that he met Irena and fell in love with her.  They eventually married and had two children: Hana and Bartholomew, Jr., or Bart, as he came to be called.

In 1929, when Hana was seven and Bart five, the situation in Czechoslovakia was so bad that Bartholomew and Irena decided to try a new life in America.  Bartholomew had brothers and sisters who had already made the journey and had settled in Chicago.  They were constantly urging Bartholomew and Irena to join them, and, finally, the two decided to go.  Once the decision was made, one of Bartholomew’s brothers wrote and advised them to come without the children, as they would be unburdened that way and could make more money.  At first, Irena refused to leave Hana and Bart, but after much pleading, Bartholomew finally convinced her to leave them with a grandmother.  Irena cried and sobbed when it was time to leave and was often depressed and inconsolable on the ship bound for America.

Once in Chicago, Bartholomew got a job with his brother at the Brach Candy Company on the night shift, and Irena found work at S. K. Smith, which was a lithography company.  After four long years of working, they were finally able to send for Hana and Bart, who arrived in America on December 15, 1933.  They traveled on a ship in the care of several other people from their village who were immigrating, too.  Irena was overjoyed to see her children, never having forgiven herself for leaving them behind.  Irena always said that it was their best Christmas ever.  From that point on, she spoiled her children completely.

By 1940, the family had saved enough to buy a little house on Karlov Avenue, where Hana has lived ever since.  When she graduated from high school, Hana got a job at the Zenith radio factory and worked there for 42 years, never missing a day.  Her parents were similar in that they remained at the original jobs they found upon arrival in Chicago until the day they retired.  Hana says that her family was just like that.  “Once they had a thing,” she says, “they always stuck to it,” whether it was a job or a house or a car.  “They didn’t like change.”

Hana and her brother, Bart, were very close as children and remained so as adults.  When WWII broke out, Bart enlisted in the army, and Hana wrote to him every week with the news from home.  When he came back from the war, he married the girl who lived down the street, and they eventually bought a house on Karlov as well.  Hana loved her sister-in-law, Dorothy, and was very involved in the lives of her nieces and nephews.

Hana herself never married, saying that “the right fellow never came along,” though Bart is of the opinion that she simply didn’t want things to change.  Whatever the reason, Hana instead devoted herself to working and to her hobbies, which included travel.  Hana loved travelling and went all over the United States with her mother.  Bartholomew never wanted to go, saying that he had traveled enough as a soldier when he was a young man.  He called himself “a homebody,” preferring to stay and take care of the house while his wife and daughter went on their trips.  He adored both of them and always had a hot meal waiting for them when they returned from their travels.

Hana enjoyed knitting and crocheting and was very active in their church, Trinity Lutheran.  Later in life, she developed a passion for going to the movies and went to see all the new films, either with girlfriends or her mother, at the Gateway, the Karlov, the Tiffin or the Logan.  Hana lived with her parents her whole life on Karlov Avenue, caring for them as they aged until they died in their eighties.  Bartholomew died of congestive heart failure at age 82, and Irena died after a stroke at age 86 in 1990.  Since then, Hana has lived alone in the house, though Bart and his family live close by.

Hana very recently began experiencing chest pains and was hospitalized with what she thought was a heart problem.  It turned out to be a respiratory condition, however, requiring oxygen, and her doctor felt she should be admitted to a nursing home until her condition clears and her health improves. Hana agrees with her doctor’s advice, but she fully plans to return to her home on Karlov as soon as she can.  Bart and his wife, Dorothy, likewise feel this is a realistic goal and are very supportive.  Not only do they visit Hana regularly, but their children and even grandchildren frequently come to visit “Great Aunt, Hana.”  They appear to be a very loving family and concerned with Hana’s well-being  and comfort.

Until she can go home, Hana is patiently biding her time, careful to follow her doctor’s instructions to the letter.  She is very cheerful and friendly, and seems to genuinely like talking with the other residents and participating in almost every activity the home has to offer.