“Something About the Eyes” 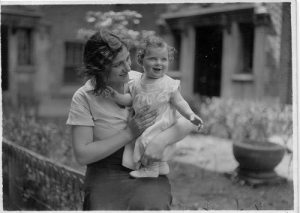 Barbara Bianchi was born in Chicago on February 9, 1922 to Polish immigrants – Wislaw Gawrych and Olga Kobylinski.  Olga worked long, long hours sewing table pads in a factory, and Wislaw worked as “a splitter,” a job he had done from the age thirteen, which consisted of “splitting” hides for jackets, shoes, gloves, etc.  Apparently he could tell just by feeling a hide what it would be good for.  Barbara says that she and her father were “buddies” and often went bowling or dancing together.  When Barbara was ten years old, Wislaw and Olga had a second child, Wislaw, Jr., but the two siblings were never close.

Barbara attended high school until she was sixteen and then quit to work in a factory.  There, she was befriended by a boy named Joey, who often persuaded Barbara to come to his baseball games.  One day he introduced her to some of the players, including his friend, Samuel Lewkowicz, the team’s pitcher.  It didn’t take Samuel long to ask Barbara out, and they quickly fell in love and married.

Samuel worked in a factory, and the young couple rented an apartment across the street from Barbara’s parents on Pulaski Avenue.  They were apparently very much in love.  Soon after their wedding, however, Samuel was drafted for the war.  Barbara was already pregnant with their first child and panicked at the thought of giving birth without Samuel there.  She pleaded with the draft board, who agreed to let Samuel stay until the baby, Samuel, Jr. was born.  Not long afterwards, however, Samuel had to report to the navy and was stationed in Hawaii.  Miraculously, he made it through the war unharmed, but on his way to pick up his discharge papers, he was tragically hit by a car and killed.  Barbara, only twenty-three, had just given birth to their second child, Ruby, when the news came through.

Barbara spent the next four years struggling to make it on her social security checks with two children and no job.  Her parents, Wislaw and Olga, who still lived across the street, were able to offer some help, but one day, Olga decided to take matters into her own hands.  She brought home a young man, Paul Bianchi, whom she worked with at the factory and introduced him to Barbara.  Apparently the two hit it off right away, and Paul Bianchi, just twenty-four at the time, came to see Barbara more and more until he finally worked up the courage to propose.  They were married soon after.  Barbara says they had “a happy life together,” and had six more children: Anthony, Mario, Howard, Albert, Luigi, and Martha.  Eventually Paul became a purchasing agent for the University of Illinois Hospital, and Barbara remained a housewife, which she says she loved.

Although she had a happy life with Paul, two more tragic things occurred in Barbara’s life.  The first was that her oldest son with Paul, Anthony, died in a fire at age thirty-two, leaving behind a wife and four children.  Apparently, he predicted his death, telling Barbara for many years that he “wouldn’t live to see thirty-three.”  The next tragedy entailed Ruby, Barbara’s second child with Samuel, who died when she was forty-five of spine cancer.

Ruby’s death was perhaps the hardest for Barbara to bear.  She always had a special bond with Ruby that she could never quite explain—“something in the eyes” is how Barbara describes it.  Perhaps it was that or that their bonding occurred at such a sad time in Barbara’s life, Ruby being born into the world just as Samuel was leaving it.  Ruby was slow to learn to walk and talk and always had a myriad of health problems, and yet she was Barbara’s favorite.  She never married and lived at home with Barbara and Paul.  Barbara cried and grieved heavily during the last three years of Ruby’s life as she battled her cancer, and it took her many years to get over her death.

Despite the sorrows Barbara faced in her life, however, she has remained a positive, optimistic person.  Her children describe her as “always up for a laugh and a joke.”   Barbara herself says that she has always been “happy-go-lucky” and that her favorite saying is “tomorrow is another day.”  She enjoys her seventeen grandchildren and seven great-grandchildren immensely and has always been very involved and active in their lives.  Besides being a life-long member of the women’s club at St. Hedwig, she enjoys collecting dishes, gardening, baking and sewing (she always sewed all the kids’ clothes over the years.)  When asked if she has done any traveling, her response was “just around the block.”

Recently, Barbara says she has begun “losing her balance” and experiencing small strokes.  She fell a few months ago and laid on the floor for four hours before Paul found her.  She is hoping to be able to go home, but, in her own optimistic character, says that if that is not possible, she will make the best of it and start a new life in the nursing home.  She is making a very smooth transition to the home and welcomes meeting the other residents.  Someone from her family usually brings Paul to see her every day.