She Sold Her Paintings From Village to Village 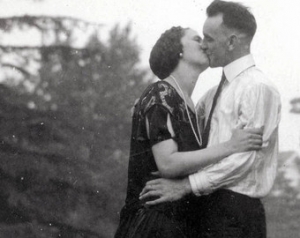 Jadwiga Sokal was born on February 26, 1914 in Poland to Wladek and Kasia Majewski.  Jadwiga went to grammar school and then found a job in a pastry shop, where she often waited on a young man, Kasper Sokal, who came in to the shop quite often.  Kasper was a widower with two older children and was 14 years Jadwiga’s senior.  The two eventually fell in love, however, and married on July 25, 1935.  Jadwiga was 21 by this point, and Kasper was 35.

Kasper worked for the railroads, and in the first years of their marriage, the young couple moved around a lot to avoid the Germans and the war in general.  Kasper had served in WWI and had been wounded, for which he had received Poland’s highest medal.  When the second World War started, he was again “drafted” because of his job with the railroad, but he somehow managed to escape it.  Kasper and Jadwiga moved to Dubno for a time, and there had their first child, Tomasz. After the war, however, Dubno became Russian territory, so they moved to Sanok and then later to Nysa, where their second son, Radek, was born in 1952.

Kasper continued working for the railroads his whole life.  Jadwiga, besides caring for their two sons and Kasper’s two older children, made extra money by painting pictures and selling them from village to village.  She was quite a talented artist, apparently, and became quite well known in the area for her artwork.

Jadwiga’s other passion in life was cooking.  Radek relates that their house was perpetually full of friends and neighbors, with Jadwiga in the center of it all, cooking for them.  She also loved to crotchet.  Jadwiga, according to her sons, was a very active, cheerful, pleasant woman who continually had to be doing something.  She was always up for new things, and in her 60’s, she got her first paying job since her pastry shop days, working in a daycare—a job she loved.

In 1964, Tomasz decided to take a bold step and immigrate to America, eventually settling in Chicago.  After a number of years, he returned to Poland, intending to stay, but after a couple of years decided to go back to America.  In 1974, Radek joined him.  Tomasz’s stories of America excited him, and he didn’t feel that Poland had much left to offer.  Radek was reluctant to leave Jadwiga and Kasper on their own, however, but at that time they were still in good health and seemed happy, so he decided to go.  Jadwiga was still working in the daycare, and though retired, Kasper continued to show up at the train yard every morning, unable to pull himself away.

In January 1975, however, Kasper died suddenly of heart and lung problems.  Jadwiga mourned the loss of him, as they had truly been in love and had had a happy marriage.  She continued to live on her own in Poland for another three years until Radek and his wife convinced her to move in with them in Chicago.

Jadwiga seemed happy living with Radek’s family and soon continued the tradition of cooking big meals and desserts and constantly inviting friends and neighbors to come and eat.  Radek tried to persuade her to continue painting, but she always responded by saying “that part of my life is done now.”  She still did her crocheting, though, and also loved music, singing, and pets of any kind.  And much to everyone’s surprise, she got a job for a number of years caring for elderly people, a job she especially enjoyed because she could bake and bring them pastries.

Jadwiga has remained in good health until very recently when she required heart surgery at age 80.  After her time in the hospital, she was transferred to a nursing home to recover.  At first, Radek assumed this would be a temporary placement, but Jadwiga is significantly weaker now than she was and may require permanent help and placement.  Jadwiga , however, is choosing to believe she is going back to Radek’s house at some point, and is therefore very content with her surroundings at the moment.  She is happy to talk with the other Polish residents and very much enjoys bingo.