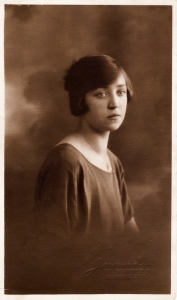 Theresa Svoboda was born on March 23, 1911 in Chicago to Frank and Simona Svoboda, both of whom were immigrants from Czechoslovakia.  According to Theresa, her father came alone to the United States looking for work and found a job right away, which he considered lucky, as jobs were scarce.  He began working as a sort of blacksmith and did ornamental work with iron.  He made beautiful and intricately-detailed iron fences.  Having gotten a job, he immediately sent for Simona to join him.  Together they had two children, Theresa and Bernard.

Theresa went to school through the eighth grade and attended one year of high school before she quit.  She claims that there was “too much fooling around,” so she enrolled in a business college instead.  When she graduated, she began working in an office and stayed there for eleven and a half years.  After that she moved from office to office over the years and says that she enjoyed all of her jobs.

Theresa never married.  She says that she had some nice boyfriends, but none of them stood out as being really special.  Nor did she want to get married just to be married.  Besides that, she didn’t want to leave her parents “in the lurch,” especially because the economy was so bad.  She felt that it was her duty, since she had a good job in an office, to stay and help support them.  Theresa lived with her parents in their two-flat on Christina Avenue until 1955, when her parents both died within six weeks of each other.  Her father died of a “bad toe.”  Apparently it got infected somehow and turned “dark as a plum,” and he eventually died.  Simona died six weeks later, though Theresa is not sure of what.  Five years after that, her brother Bernard died as well.

Not much else of Theresa Svoboda is known.  What happened from that moment in 1960 when her brother died to her present admission to a nursing home is not entirely clear.  Apparently, she continued to live in the two-flat on her own, but as the neighborhood got worse and worse, Theresa became more and more reclusive.  She was robbed at least twice, and the first floor apartment was left empty and was eventually gutted, presumably by neighborhood gangs.

About five years ago, in 1989, Theresa suffered from frost-bite and had to have several toes amputated as a result.  The story made the newspaper, and after reading the article about Theresa’s plight, a woman by the name of Sissie Novak decided to take action.  She began a correspondence with Theresa and sent her many packages with clothes, blankets, food and personal items.

Recently, however, Sissie stopped receiving  return letters from Theresa, which worried her.  Theresa was not in the habit of writing often to Sissie, but she would at least send a thank you note after receiving a package.  When the notes stopped coming, Sissie sent a postcard, urging Theresa to respond to let her know she was okay, as Sissie had no other way of contacting Theresa, who did not own a telephone.  When she still did not hear from Theresa, Sissie finally decided to call the police.  The police eventually followed up on the call, but Theresa refused to open the door, fearing a trick.  The police then urged her to go to the window and look out, where she could see their squad car, uniforms and badges.  Reluctantly, then, she opened the door.

Upon entering her apartment, the police discovered that she was living there with no heat and no utilities and that her only source of food was apparently a nearby McDonalds.  Her legs were severely frost bit, and she could barely walk.  The officers attempted to get her to leave with them, but she refused.  They left and reported their findings to Sissie, who, because of her own health issues, could not drive into the city to aid Theresa herself.  Sissie continued to repeatedly call the police, begging them to periodically go and check on Theresa.  Finally, one officer took it upon himself to try to help Theresa.  He went back to the apartment on his own time and managed to coax her out and then drove her to Methodist Hospital, where she eventually had to have both legs removed.

Meanwhile, Sissie stayed in contact with the hospital and when it was time for Theresa to be discharged to a nursing home, she urged the staff to place her in a Czech home where she hoped Theresa would get not only a warm bed and good food, but a fellow community she might be able to relate to.

As soon as Sissie was physically able to drive to the city, she met up with the officer who had taken Theresa to the hospital, and the two of them went to the two-flat to see if there was anything salvageable or anything Theresa might want or need at the nursing home.  When Sissie arrived there, it was worse than she had ever imagined.  It was filthy, wretched and freezing.  Gang graffiti covered the inside walls, and it appeared to be little more than a wind break from the elements.  But what surprised Sissie the most, however, was that all of the packages she had sent over the years with food, blankets, clothing —even a space heater—were stacked up in the corner, unopened.

As for Theresa, she says she is “content” with her current placement in the nursing home, though she seems muted and depressed.  Nothing seems to bring her either joy or sadness.  She expresses no concern or worry about anything at all, to the point of complete indifference.  She doesn’t believe in planning ahead, she says, “because you never know what’s going to happen.”

Sissie visits whenever she can, though she lives in the far suburbs, so it is a bit of a trek for her.  She says that she was angry when she discovered that Theresa had not used a single thing she had sent to her, but, upon learning Theresa’s history, she eventually came to the conclusion that the relatively sudden deaths of all of Theresa’s family members “must have drove her a little crazy.”  Likewise, Sissie says she thought Theresa would be more grateful to her for rescuing her, but Theresa does not seem to understand that it was Sissie who was responsible for getting the police to intervene.  Theresa does, however, seem to realize that it was Sissie who sent her all the packages and calls her “my angel,” whenever she visits.