She Worked Until She Was 80! 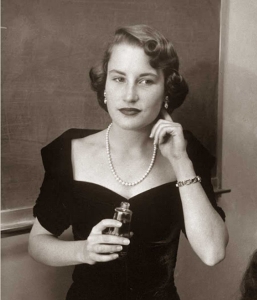 Hedda Woods was born in Chicago on October 25, 1905 to Ulla Ostberg and Birger Haugen, both immigrants from Norway.  Soon after they married in Alesund, Norway, Ulla and Birger decided to come to America to try a new life.  Family legend has it that when they came through Ellis Island, Ulla, the stronger of the pair, herself carried their trunk on her back!  From Ellis Island, the Haugen’s made their way to the west side of Chicago.  Birger got a job “working with figures,” meaning he was a sort of draftsman and designed machinery.  Ulla cared for their seven children:  Signe, Carl, Egil, Tanja, Erling, Finn and Hedda, all of whom survived childhood.

Hedda was the youngest and says that she usually got her way, being a very stubborn child.  She graduated from Austin High School and got a job as a secretary for the Pullman Railroad Company.  From there she went to work for Great Western and then to the Milwaukee Railroad Company, where she worked until she was sixty-five.  According to her nephew, Dennis, Hedda always took her job very seriously.  She worked hard and was always on the lookout for ways to advance herself, both professionally and personally.

Birger passed away around 1932, and Ulla died nearly twenty years later in the 1950’s.  At the time, Finn, Erling, Tanja and Hedda were still living at home, so they continued on this way, even after both parents died.  It was right about this time, however, that Hedda met a man by the name of Dr. Nelson Woods at a dance.  Hedda says that the group of friends she was with that night met up with another group, of which Nelson happened to be a part.  The two hit it off right away and began dating.  When Hedda was forty-six, they married and bought a home in Elmwood Park.

Hedda kept their house “neat as a pin” and joined many women’s groups, such as the Eastern Star, the 19th Century Women’s Group of Oak Park, and the Lyden Township Women’s Group.  She also loved art, music, sewing, dancing and was a very good cook.  Dennis reports that his aunt was an extremely intelligent woman but was stubborn and had a razor sharp tongue.  Hedda was confirmed a Lutheran but later in life joined the Christian Science Church in Oak Park.  Hedda and Nelson never had any children, and they apparently had a very happy marriage.  They traveled all over the United States on vacations or attending conventions.

Hedda retired from the Milwaukee Railroad Company at age sixty-five.  Her last day was on a Friday, and on the following Monday, she started at a new job at Continental Bank in the “corporate art” department.  Apparently, the bank, or a division of the bank, owned a large collection of paintings, sculpture and select pieces of fine art that they rented out to various companies.  Hedda was put in charge of this department and really loved it.  She continued working in this position until she was eighty years old!

Hedda made the decision to finally retire for good in 1985 when she was walking to work one morning.  It so happened that she was crossing a bridge over the Chicago River when a strong blast of wind whipped through and nearly blew her over.  Hedda grabbed onto a man who was walking beside her and thus managed not to fall.  She is convinced that if the man had not been there at that moment, she would have been blown into the river and drowned.  It was then that she decided she “couldn’t go to work anymore.”

Despite the fact that she was no longer working, Hedda continued to be active in her women’s groups, though she was living alone now.  Nelson had passed away peacefully in 1978, when Hedda was seventy-three.  She managed to continue on her own, though as time passed, she grew more alienated from people as her hearing got worse, her memory more unreliable, and her tongue sharper.  Over the years, Hedda has likewise grown apart from her siblings, though several of them still live in the area.  She has only remained close to her sister, Signe, and Signe’s son, Dennis, her favorite nephew.  Dennis says that he has gotten along with his aunt all these years because he has always been able to ignore her critical comments.  He says that she is actually a very strong, spiritual woman who got through troublesome periods in her life with prayer.

In 1992, Hedda fell and broke her hip.  At that point, Dennis helped her hire a live-in nurse, an arrangement that lasted almost four years, until Hedda’s finances were almost exhausted and she likewise required more care.  In bringing her to a nursing home, Dennis’s hope is that she might regain some social involvement.

For her part, Hedda seems to enjoy talking with the other residents, and is rarely anxious because each day she believes that Dennis is coming to pick her up and take her home.  She is very forgetful, but loves talking about the past, about which her memory appears to be crystal clear.