She Met Her Husband at a Ball in Prague 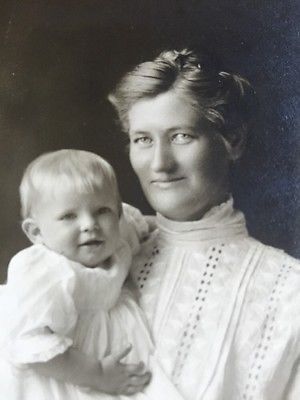 Tereza Kadlec was born on October 4, 1897 in Olomouc, Moravia to Karel Hruska and Anna Jandacek.  Tereza was the second youngest of eight children (5 girls and 3 boys), all of whom lived to be over ninety years old.  Karel was a sugar beet farmer, and Anna was a housewife.  Both Karel and Anna also lived to be quite old: Karel passing away when he was 95 and Anna at 96.

Tereza went to elementary school, like her siblings, and then went on to a “young ladies finishing school” in Olomouc.  At a ball in Prague, she met a man, Marek Kadlec, who was twenty years her senior.  They fell in love and married when Tereza turned eighteen.

Tereza and Marek began their married life in Prague.  Marek was a professor at the university there and later became a senator in the Czech Republic.  They had one child, Olivie, who eventually immigrated to the United States.

In 1965, Marek died of stomach cancer at age eighty-seven.  Tereza was left to live alone in communist Prague, so she decided to leave and go live with Olivie in America.  Tereza does not explain all the details of how she accomplished this, but she somehow made her way to Oak Park, Il., where Olivie and her husband, John, and three sons lived.

Once here, Tereza was determined not to sit around and was able to get various jobs as either a housekeeper or a nanny for wealthy families on the North Shore.  She also helped Olivie to raise the boys.  Olivie says that they never felt burdened having Tereza live with them and that they have always enjoyed her company very much.

At age 96, Tereza is remarkably healthy, both physically and mentally.  She learned English when she immigrated, but she has since lost much of it.  She can still carry on a wonderful conversation with anyone who speaks Czech, however.  Recently, Olivie decided to take a two-week trip to Prague to visit old friends and the remaining members of the family still alive there, but she did not feel that her husband, John, could handle caring for Tereza while she was away, especially as his ability to speak Czech is very limited.  Instead, she proposed that Tereza go to the Bohemian Home to stay, an idea that Tereza became very excited about.  She even went so far as to begin calling it a “mini-vacation” and began to look forward to meeting and talking with new people, as she is at times bored and lonely when the rest of the family is out working.

On move-in day, then, all hopes were high as Olivie carefully got her mother set up in the private room they had requested, having brought many things for her from home.  Goodbyes were said, and Tereza seemed very happy.  Before long, however, she became disoriented and frightened, repeatedly calling out for Olivie and refusing to eat.

After two days of this, the staff decided to move Olivie to a double room with another Czech lady, which helped Tereza greatly.  She is calm and oriented now and beginning to enjoy herself.  She spends her days chatting with other Czech ladies and loves the Czech music that is often playing in the background throughout dinner.  She is a very sweet, articulate woman who says she used to enjoy sewing, baking and children very much.  She would like to have been a teacher, she says, but it wasn’t possible.  She loved being a mother to Olivie and is grateful that she got to spend some time with her grandsons before they moved out.  She says she likes it here at the facility, but she is looking forward to going home, too.  She has asked, however, if she might visit from time to time.