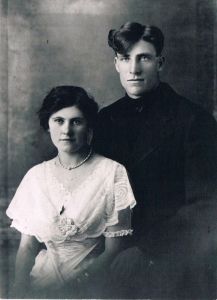 Tereza Hlavacek was born on August 15, 1895 in what was then called Bohemia, the part of the Austro-Hungarian Empire that later became Czechoslovakia.  Her parents were Dobroslav and Marie Cipris, about which little is known.  Tereza was one of four children and attended grammar school before she quit to start earning money, which the family desperately needed.  She didn’t have much luck, however, so when she was just fifteen or sixteen, she decided to follow her older sister to America, hoping to get a job there.  She made the journey alone and traveled to Chicago, where her sister was living in a boarding house.  An uncle, Joseph Krall, also lived nearby, and he gave Tereza a job working in his tailor shop.

Not long after she arrived, Tereza was introduced to Bernard Hlavacek, who did odd jobs for her uncle and also worked as a delivery man.  Bernard, a quiet, shy boy, supposedly fell in love with Tereza right away, impressed by her ability to work hard and the way she always comported herself.  He was nervous to ask her out, however, fearing what her uncle would say, and instead spent a year worshipping her from across the shop.  Finally, Tereza’s uncle pulled him aside one night and asked what he was waiting for.  Bernard, stunned with relief and overcome with joyful hope, asked Tereza the very next day to walk with him in Humboldt Park, to which she said yes.  They began dating in earnest, then, and married shortly after.

Once married, Tereza stayed home to be a housewife, and Bernard continued working with her uncle, having been elevated now to a full tailor.  Eventually the young couple was able to buy a small house with a big yard, which Tereza converted into a huge garden and which she diligently worked in every day.  They had two sons, Joseph and Simon, both of whom Tereza was very attached to.

Tereza toiled endlessly for her little family and was reportedly a very strong, independent woman.  She was apparently quite stubborn and wanted her own way in most things, but she was also most appreciative of any little thing anyone ever did for her or gave to her.  Her daughters-in-law report that Tereza was also a little bit vain, her appearance always being very important to her.  Though they had little money, Tereza made it a point to always be nicely dressed.  There is a family story that once when one of Tereza’s friends was about to leave on a trip to Europe, Tereza was so disgusted by her friend’s old, tattered hat that she whipped off her own hat and gave it to her, saying “Here!  Take mine!” Even in her nineties, Tereza always donned a sweater because she was unhappy with how her arms looked.

Though Tereza has always been a strong woman, she has also been a very nervous person, especially as the years have gone on.  Apparently, when Joseph and Simon both went into the army, Tereza became so fraught with worry that her ears “started draining” and she went deaf in one ear.  The worst blow to her nerves, however, was when Bernard passed away at age 57.  He had a stroke while working in the yard and was taken to Cook County Hospital.  Tereza visited him faithfully each day, but on the third day, when she arrived to see him, she was shocked to find his bed empty.  When she asked where her husband was, she was told nonchalantly that he had died in the night.  From that point on, Tereza says, she developed “the shakes.”

After Bernard’s death, Tereza threw herself into community and church activities.  She still gardened and traveled daily from Cicero to the Bohemian National Cemetery in Chicago to lay flowers on Bernard’s grave, a ritual she kept up for six years.  In addition, she began cooking for the Bohemian club she belonged to and also started crocheting again.  She had always enjoyed crocheting as a hobby, but after Bernard’s death, it became almost a frenzied obsession.  Her daughter-in-law, Rita, says that she must have produced thousands of baby booties over the years.  She also found solace in traveling and went to Oregon, Florida, Hawaii, and to Europe twice.  Sometimes she used a travel planner, but sometimes she made all her own arrangements.

Tereza continued to live independently until 1982, when she had to have a hip replacement.  It was then that her son, Joseph, persuaded her to move in with him and Rita.  This seemed appropriate to Tereza, Joseph being the oldest, though her favorite was Simon, whom she always referred to as “my baby.”  Tereza’s hip mended well, though she continued to have pain on and off through the years.  It didn’t stop her from being active, however, and she continued to garden until she was 94.

Unfortunately, Joseph passed away from cancer in 1985, just three years after Tereza had moved in.  It was a terrible blow, again, for Tereza and for Rita, but they helped each other get through it.  After her son’s death, Tereza began to slow down and became much weaker than she had been.  She had to rely on Rita for things she had always been able to do herself, such as bathing and dressing.  Simon and his wife, Norma, not wanting all the burden of care to be on Rita, started coming over regularly to help, but it was difficult for them all.  Rita developed severe arthritis and became increasingly worried that something would happen to Tereza, such as a fall, and that she wouldn’t be able to help her.  Finally the stress grew so great that the four of them sat down and discussed the possibility of Tereza going into a nursing home.  Tereza was not thrilled by the suggestion, but she was not unreasonable and seemed to understand that she did not have a lot of choices.  They all went and toured several places, and Tereza eventually chose The Bohemian Home for the Aged on Foster and Pulaski because it was so close to the Bohemian National cemetery, where Bernard was buried, and because there were so many residents with whom she could speak Czech.

Tereza moved into the nursing home in 1993, at age 98.  Her transition was relatively smooth, though she at first spent all of her time in her room, furiously crocheting.  When the staff attempted to intervene and suggest that she limit the amount of time she spent crocheting so that she could meet other residents and participate in the facility’s activities, she grew angry and refused to crochet any more.  She wanted complete control of her hobby, she said, or she didn’t want to do it all.  She called Simon to come pick up all of her crochet materials and hasn’t engaged in this activity since, though many residents and staff have tried to persuade her otherwise.

Tereza did eventually begin to come out of her room and meet people, but her favorite activity was visiting with Simon, who came to visit her two or three times each week for over a year.  Tereza and Simon seemed to have a very special relationship, and he was able to calm her in any situation.  He often took her walking in the facility’s gardens and would sit outdoors with her, just talking or laughing.  He was always able to understand her and was likewise always able to get her to understand him, despite her hearing loss.  According to Simon’s wife, Norma, the two of them had a strange connection in that he would always appear at the nursing home just when Tereza seemed to need him most.

Sadly for all, Simon passed away in 1994 of bone cancer.  His dying request to Norma was to never tell Tereza that he had died—to keep his death from her.  Norma and all the rest of the family agreed, though it has been very painful for them to keep up the pretense, even now.  Norma and Rita still visit her, but not as much as Simon used to.  When Tereza inevitably asks why Simon didn’t come, Norma lies and says he is at home in bed with a bad back.  Tereza seems to accept this story, but she is always sad and worried about him, especially when he wasn’t there for her 100th birthday party.  On that occasion, Norma told her that Simon had to stay home with the flu.  It is a situation that neither Norma or Rita are comfortable with, but they don’t know what else to do.

Besides her worry about Simon, Tereza is seems happy.  She is remarkably cognizant and able to get around on her own throughout the home.  She enjoys sitting and talking with other residents the most or watching Lawrence Welk on TV.