She Gave Her Two Sons to Her Sister 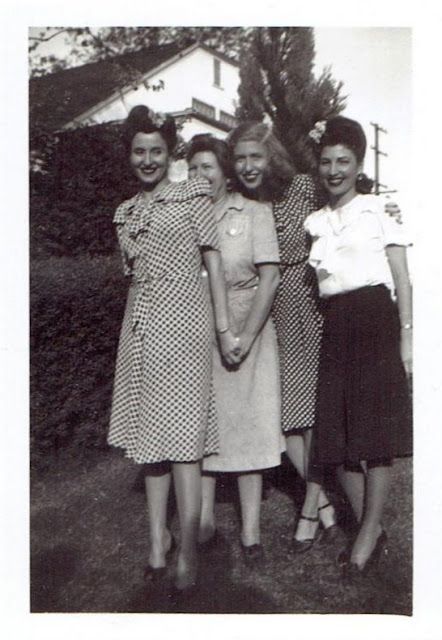 Sadie (2nd from right) and her sisters.

Sadie Riley was born on February 16, 1914 on a farm near Pittsburgh, Kansas to Lonnie Belanger and Jeannette Fenske.  Lonnie was a cattle farmer, and Jeanette cared for their six children: Fae, Alan, Della, Lila, Elbert and Sadie, all of whom lived into adulthood.

Sadie graduated from Crawford Community High School and got a job in retail shortly after.  She didn’t like it, however, and started waitressing instead.  At some point she was introduced to Emil Riley, who was a few years older than her.  Emil worked as a dental technician whose primary job was to make false teeth.  After dating for a couple of years, Emil and Sadie got married and had a child, Irvin.

By this time, most of Sadie’s siblings had left Kansas for Chicago, so Emil and Sadie decided to follow.  Emil found work again as a dental technician, and Sadie had another child, Robert.  Soon after, however, the two began to argue more frequently.  Irvin, who was five at the time, remembers his parents fighting constantly.  It is not a period of her life that Sadie likes to discuss, only saying that in the end, she and Emil decided to divorce.  Emil went back to Kansas and, according to Sadie, never sent “a penny” for her and the boys.

Sadie tried to provide for herself and her sons by going back to waitressing, but she could never make enough to pay the rent.  Irvin says that they lived a nomadic life, always moving from apartment to apartment.   Finally, Sadie had no choice but to ask her sister, Della, who was living on Oakley Avenue if she would take Irvin and Robert to live with her and her husband and children.  Della agreed, and though it was only supposed to be temporary, the boys stayed there for the next eight years.

Irvin says that he didn’t see much of his mom in those eight years and still isn’t sure what she was doing all that time.  “My aunt always told us she was working.”  When Sadie did finally show up to take the boys back to live with her, having apparently finally gotten a stable apartment and job, the boys didn’t want to go.  “I felt terrible,” Robert says.  “Aunt Della was more like our mother by that point.  I was only four when I went to live with her and Uncle Russ, and we had also grown very close to our cousins.  So I became very angry and rebellious.”

Irvin was almost sixteen when the two brothers moved back in with Sadie.  He finished high school and then joined the army, leaving Robert there alone.  “I got into a lot of trouble, you could say,” he says.  “I was arrested several times and eventually sent to a juvenile home for boys downstate.”  When he was eighteen, he joined the army just as Irvin had done.  “That sure straightened me out,” he says.  Neither of them have seen their father, Emil, since the day he walked out.

Irvin and Robert both say that Sadie has always been a very private, independent woman.  She did not have a lot of hobbies besides watching game shows and Days of Our Lives.  At one point, Irvin seems to remember that she liked to knit, “but she hasn’t done that in years.  She worked as a waitress for over forty years at various restaurants around the city.”

After she retired, Irvin and Robert arranged for her to move into the Senate Apartments on Pulaski, hoping she would meet people and take up some hobbies.  Their plan apparently backfired, however, and Sadie became even more reclusive than before.  In fact, they say, “she turned into a hypochondriac” and started going from doctor to doctor insisting that there was something wrong with her.  She ran up some very large medical bills doing this, which Irvin and Robert were then obliged to pay.

After paying off her many debts, Irvin and Robert decided  to keep closer tabs on their mother and took turns going to check on her, giving her money and stocking her apartment with food.  When the other brother would come just a week later, however, he would be shocked to find all of the money and the food gone.  At first they suspected theft, but finally they figured out that Sadie had gotten into the habit of giving all of the food and money away and would then forget that she had done so.  It was a situation they did not know how to deal with.  Over time, her memory only got worse.

When she recently had to go into the hospital for a colostomy, however, it seemed the perfect time to admit her to a nursing home.  So far, Sadie is recovering well from her surgery and is adjusting to her new home.  She is a pleasant woman and is very cooperative in her own care.  She enjoys bingo and watching TV with other residents, though she frequently forgets where she is and asks to go home.  Irvin and Robert, neither of whom married, continue to periodically visit and are happy that she is finally in a “safe place.”