“She Could Move Mountains” 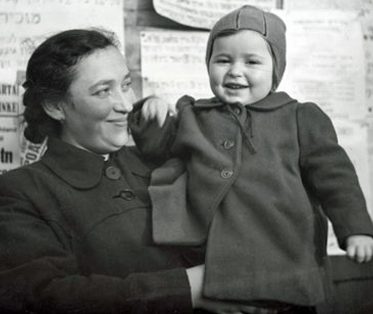 Lidka Klimek was born on March 13, 1900—one of twelve children—in what is now Radziechow, Poland. Not much is known of her parents, her childhood, or her early life with her husband, Edmund Klimek and their four children: Marta, Olga, Regina and Fabian. Lidka’s story, it seems, begins in 1941 when the Russians invaded their village in what was then a part of Germany.

Like most of the people in the village, Lidka and Edmund and their children were displaced and sent on a cattle train to Siberia. It is unclear why, but somehow on the journey, Edmund died, leaving Lidka alone with the children. Once in Siberia, she was forced to cut trees for which she was given a daily ticket for bread and water. She took her children with her into the forest to help her and to forage for any extra food they could find. The Klimek’s spent the rest of the war this way, and when it finally ended, they were again put on a train, this time bound for refugee camps in what is now Pakistan and Afghanistan. From there they went to a camp in India under English control and remained there until after India was liberated from the British in 1947. From India, Lidka took the family to London, where they stayed for a number of years.

At some point in this tragedy, Lidka’s oldest daughter, Marta, escaped one of their internments, making her way back to Poland to join the underground. She drove ammunition trucks for the army in Poland and then found her way to Italy and finally the United States after the war ended. She and her husband were able to get a sponsor in America through a distant relative of her husband’s. Finally, in 1952, Marta convinced Lidka and the rest of the family to come to Chicago so that they could all be together.

Lidka finally agreed and made the journey with her remaining three children, all of whom had spouses and children of their own by now. They landed in New York first, where they stayed for several months, though they hated every minute of it. They eventually made the journey to Chicago where they were finally reunited with Marta, meeting her husband and children for the first time. From that point, they all worked and saved money until they could buy a house big enough for them all to live in.

A pattern quickly developed in which the adults all went out to work each day while Lidka stayed home and watched all of the grandchildren, teaching them Polish and stories from the past as well as how to respect the country and culture they now found themselves in. She was always dispensing little bits of wisdom, her family says of her. Besides tending to the children, Lidka also did all of the cooking, the cleaning, the sewing, the baking, the gardening, and volunteered at church. At the holidays, their house was always packed with people and food, music and laughter. One of Lidka’s daughters, Olga, recounts that her mother was the most positive person she ever knew—so active and truly “full of life.” Lidka was always ready for anything, Olga says. “She was one of those people who could truly move mountains.” All of her children report that despite what she had been through, Lidka remained a very positive, loving, warm, caring person. “She was wonderful,” they all agree.

Lidka remained at home with her family until 1995, at which point they admitted her to a nursing home.  She was 96 at the time.  Apparently, despite the family’s best efforts, Lidka was having more and more difficulty doing even the most simple things and was constantly falling, wandering and confused.   Lidka’s doctor advised putting her in a nursing home before she seriously injured herself, and, after much debate, the family finally agreed.  Someone from the family comes daily to sit with her, though Lidka is for the most part uncommunicative.  She will sit during an activity at the home, but she does not usually participate.  Likewise, she does not seem to enjoy speaking with other Polish residents to whom she is introduced, but simply sits quietly, whispering “pray for me” and “pray for us” over and over.