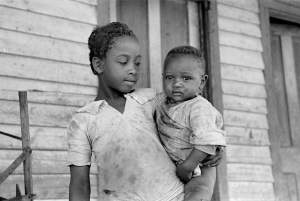 Sadie Margaret Perez was born on January 21, 1931 to Mississippi sharecroppers, Leland Brown and Flora Jefferson.  Flora often worked in the fields beside Leland despite the fact that she had fifteen children:  Dwayne, Jeannette, Abraham, Lila, Della, Rosalie, Elbert, Forrest, Irma, Eula, Winnie, Sadie, Alton, Dewey, Merle, and Clinton.  Sadie says that only seven children were ever living in the house at any given time, though, as the rest were out on their own.

Sadie was the youngest girl and was named by the man who owned the little grocery store in town.  He happened to be making a delivery at the farm on the day Sadie was born and insisted that the new baby be named for his own daughter, Sadie Margaret.  Even though they were white, his family was very kind to the Browns and sent a basket of fruit and candy to them every year at Christmas.

From a very little age, all of the Brown children were expected to work in the fields, and Sadie was no exception.  When she was eight, however, she was sent back up to the house to learn cooking from her mother.  School was a very sketchy affair.  All of the white children on the surrounding farms were picked up every day by a school bus and taken to the town school.  “Colored” children were forced to go to the country school, which, Sadie says, “was like having no school at all.”  Apparently the teaching was very poor, and Sadie says Flora was better able to teach her children numbers and letters at home.

Near to the Browns lived a white sharecropper family, the Dicksons, though the oldest child, Annie, was “half black and half white.”  Mrs. Dickson often told the neighboring children that Annie had “come out dark” because a bear had scared her while she was pregnant with her.  None of the Brown children believed her, but they pretended to.  Because she was bi-racial, Annie was not allowed to attend the town school with the white kids, so Mrs. Dickson taught her at home and the Brown children, too.  Sadie says she learned a lot from Mrs. Dickson, but their “class” would frequently be broken up when Mr. Dickson came home drunk and called them awful names, though most of his anger was directed at poor Annie, who had become a good friend of Sadie’s.

When Sadie was just nine years old, a terrible incident occurred which she rarely rarely ever talks about.  Sadie says that one summer day, she was at home watching her younger brothers while everyone else worked in the fields.  At some point, the sixteen-year old son of the family who owned the farm rode up on his horse, forced his way into the house, and tried to rape Sadie.  There was no one to hear her screams, but Sadie’s brothers, little though they were, managed to fight him off and he left.  Sadie and the whole family were badly shaken, but they did not dare complain to the owners of the farm in fear of losing their place.

By the time she was thirteen, it was time for her Sadie to leave the farm, so Flora arranged for her to go live in Hattiesburg with her older sister, Jeannette, who promised to get Sadie some schooling.  Instead, Jeannette arranged for Sadie to become a nanny for a white family.  Sadie worked as a nanny for two years before appealing to her brother, Dwayne, in Chicago.  Dwayne had apparently wanted Sadie to come live with him and his wife from the very beginning, but Flora was afraid his wife might mistreat Sadie.  Flora eventually gave in, however, and sent Sadie to Chicago.  Dwayne’s wife, it turns out, did not mistreat Sadie, but enrolled her in night classes to try to get her her high school diploma and also got her a job at a packing company, where Sadie worked for thirty-three years.  She never did get her diploma.

Besides knowing Dwayne and his wife, Sadie also had cousins living in Chicago, whom she began to see quite often and whom she even went to stay with sometimes.  One night, she was at a party given by one of her cousins when she was introduced to a young Mexican man by the name of Miguel Perez, who liked her immediately and proposed!  Sadie was shocked and replied that they didn’t even know each other.  “Yes,” Miguel apparently replied, “but I need a wife!”  Sadie said she would think it over.  Three weeks later, she married him in her cousin’s home.

When Dwayne found out about Sadie’s quick wedding, he was furious that she had married a Mexican, never mind the hastiness of it.  “Why didn’t you tell me you were looking for a husband!” he shouted at her.  “I would have found you one!”  After he got to know Miguel, however, he actually liked him very much.  Sadie says that her husband was very good to her and that they have always had a close relationship.  Together, they had four children: Miguel, Jr., Monica, Gabriela, and Jorge.  All are alive and well, except Jorge, who died at age twenty-nine from either a drug overdose or suicide.

After working at the packing house for thirty-three years, Sadie began working at the Salvation Army.  She was an expert at crocheting and loved watching television and movies.  Miguel took her to Mexico three times to meet his family, but Sadie says she did not enjoy it, as it was too hot.  Other than that, they did not travel, except occasionally to Wisconsin to fish.

Over the years, Sadie’s health has continued to decline.  She has suffered from asthma since she was a young girl, though no one knew at the time what it was or how to properly treat it.  She has recently been in and out of the hospital for a variety of illnesses and surgeries.  Each time she has been discharged home ,it has been harder and harder for Miguel to care for her, as his own health is now starting to go, as well.  Also, not only does Sadie require skilled care, but her excessive weight makes it almost impossible for the family to lift or move her.  Most recently, then, when Sadie was admitted to the hospital to have fluid around her brain drained, the hospital staff finally convinced the family to have her transferred to a nursing facility.

Sadie is making a relatively smooth transition to her new home, though she appears at times to be depressed.  She does not spend much time interacting with other residents, but instead waits in her room for her family to visit.  Sadie is a lovely woman to talk to and is very gentle.  Despite everything that has happened in her life, she remains loving and forgiving.  For every story she has about something hateful that happened to her, she will immediately tell one of love and optimism.  She says that she has always “looked on the bright side of things” and has gotten through hard times with prayer.