She Overcame Her Stutter . . . 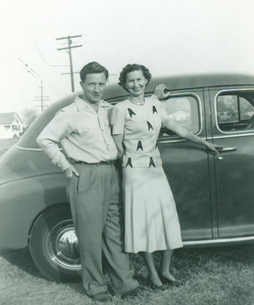 Annie Flemming was born on November 18, 1900 in a small town in Wisconsin.  Her parents, Myrtle Jones and Howard Gilman, were of English and Irish descent.  Howard worked in a flour mill, and Myrtle worked in a tailor’s shop and also cared for their four children: Minnie, Ralph, Annie and Hazel.  According to Annie, there was nothing exceptional about her birth except that she was breech.  As she began to walk and talk, however, it was discovered that she had a speech impediment–a stutter–which everyone said was caused by being breech.  “It has followed me all my life,” says Annie.

When Annie was just four years old, Howard decided to move the family to Nebraska, where he felt there was more opportunity.  Annie grew up there and attended school through eighth grade.  She begged her parents to let her attend high school as her older siblings had done.  Against their better judgment, they agreed, but, as expected, Annie found it difficult to keep up due to her speech problem.  The high school staff suggested that perhaps Annie would be better off attending a special boarding school back in Milwaukee, Wisconsin for handicapped, deaf and blind children, so, after much debate, Howard and Myrtle decided to send Annie there.

Annie worked hard at her new school and became a favorite of one of the teachers, who quickly realized that Annie did not belong there.  He contacted the Gilman’s and suggested that Annie go and live with a family he knew in Chicago who would take care of her and send her to a normal public high school.  The Gilman’s hesitantly agreed, and Annie then went to live with the Connelly’s, her adopted family, as she began to call them.  During her four years in Chicago, Annie thrived, and her speech actually improved somewhat.  Not only did she graduate, but she did so with honors.

After graduation, the Connelly’s, who had grown quite fond of Annie, encouraged her to stay with them and to try to get a job in Chicago, but Annie missed home too much, so she returned to Nebraska and enrolled in a one-year business school.  Unfortunately, the move back home made her stutter grow worse again, and though she did well at business school academically, she decided to repeat the whole year over in an attempt to conquer her stutter.

Annie did not succeed in conquering her stutter, but she finally did graduate and then bravely attempted to find a job as a secretary.  She was cruelly disappointed, however, to find that no one would hire her.  She fell into a sort of depression and eventually decided to go back to Chicago.  She stayed again for a time with the Connelly’s before she was able to get her own place.  She gave up her dream of becoming a secretary and just took any odd job or factory position she could find.

This went on for many years until Annie was in her thirties.  One night she went with friends to a party and was there introduced to a man by the name of Samuel Flemming, who worked as a machine shop operator.  Samuel was the same age as Annie and had also never been married.  The two of them quickly took a liking to each other and began dating and eventually married.  Annie says that Samuel was the love of her life and that she adored him.  Living with him helped her stutter immensely, Annie says, and it was because of him that she tried again to get a job as a secretary.  She finally succeeded and got a job in a law firm on State Street.  “It was the proudest day of my life,” she says.

Annie worked there for several years before getting up the courage to again apply for another secretarial position, this time at a building products company.  She ended up getting the job, and she loved it.  She worked there into her late sixties, and even after she retired, she would still come in as a temp if they needed her.

Annie and Samuel apparently had a wonderful life together.  They didn’t have any children, but they belonged to many civic and church groups and had many hobbies.  Before she met Samuel, Annie spent her free time reading and doing needlework, but after she married, she adopted several of Samuel’s hobbies.  Thus she began helping him to rebuild old cars, his passion, and also to watch professional wrestling with him.  Every year, they traveled to Florida where they would rent a little cottage and fish.

Annie and Samuel were a very happy couple until 1959 when Samuel died suddenly of a heart attack.  Annie was devastated, but she eventually got over his death and continued on her own.  All of her siblings had also already died, though she had many nieces and nephews back in Nebraska.  So except for one niece, Emily, a daughter of her younger sister, Hazel, who also lived in the Chicago area, Annie was quite alone, as she had outlived most of her friends as well.  As Annie grew older, Emily invited her aunt to come live with her, but each time, Annie refused, saying that she didn’t want to burden Emily and her family.

Annie lived independently until the early 1990’s when she made the decision to move to a nursing home.  “It’s time,” Annie apparently said to Emily, who, at Annie’s request, helped her to choose a place. Annie is making a relatively smooth transition to her new home, though she is still a bit withdrawn.  She enjoys bingo and has also taken an interest in the garden plots in the back of the home.  “I’ve had a good life,” she says, “but now I’m ready to go to Samuel.”  Incidentally, there is no sign of her stutter, perhaps proving once again that love always wins.