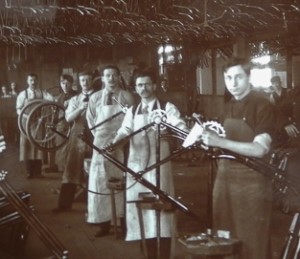 The Schwinn Bicycle Factory, located on Chicago’s northwest side, was one of the many bicycle factories across the city but the one which eventually became a Chicago icon. Schwinn was founded by a young German entrepreneur, Ignaz Schwinn, who came to the United States in 1890 to make his fortune in the booming bicycle industry. Within five years he partnered with meatpacker, Adolph Arnold, to form Arnold, Schwinn & Company and released the Roadster, which was a 19-pound, single-speed recreational bike. Very quickly, however, they became known for their high-speed racing bikes.

By 1907, with profits nearly non-existent, Arnold decided to leave the company, convinced that the bicycle boom was over. Now on his own with his son, Frank, Ignaz Schwinn also began to experiment with designs for motorcycles, and in 1911, though they had themselves come up with a superior blueprint for a new type of motorcycle, they purchased the bankrupt Excelsior Motorcycle Supply Company for $500,000, which included the factory on Courtland and Lawndale, all inventory and $200,000 worth of back orders. By 1913, Schwinn was the third largest motorcycle producer in the country, behind Harley-Davidson and Indian. In 1917, they increased their dominance when they bought the Henderson Motorcycle Company of Detroit, which produced one of the best bikes of the era. The owners, however, despite their quality product, couldn’t keep up with the supply shortages and the increased prices brought on by World War I and eventually sold to Schwinn. Thus was born the famous Excelsior-Henderson Motorcycle.

Schwinn soon became very wealthy and owned a mansion at the corner of W. Palmer and Humboldt Boulevard on Palmer Square, an elite residential address of some of the city’s more wealthy. Ironically, Palmer Square proper, a long, oval-shaped park lined with mansions, became the epicenter of the city’s bicycle culture with races held regularly on its long, linear path. Schwinn also owned an apartment building at the east end of the square to house the employees of his bicycle and motorcycle factories, which is where Henrietta and her family lived while her father was still an employee at Excelsior-Henderson in the novel, A Girl Like You.

With the stock market crash in 1929, however, motorcycle sales began to plummet, and in the summer of 1931, Schwinn called together his department heads at Excelsior and informed them that they would cease production immediately, saying, “Gentleman, today we stop.” Schwinn was convinced that the Depression would continue for years, so he dismantled operations despite a full order book, creating a shock to owners and dealers alike. Excelsior-Henderson ceased production at a time when the company was a leader in the industry, making what were regarded as the finest machines available.

From there, Schwinn focused all of his attention on bicycles and continued as a Chicago icon until the company relocated to Colorado in 1993.