He Saw Her Through the Bakery Window 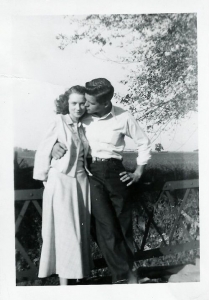 Beatrice Wills was born on February 17, 1917 in Chicago to Emil and Petra Schmidt, both of German descent.  Emil worked as a coal and ice man, and Petra cared for their two children, Beatrice and Agatha.  The family lived on the northwest side of Chicago and were members of St. Alphonsus parish.  Both girls attended grammar and high school, and upon graduation, Beatrice got a job in a bakery.

Her future husband, Lawrence Wills, would often tell the story of how he passed by the bakery one day and, upon peering in the window, saw Beatrice working there and instantly fell in love with her. Many weeks followed in which he strolled past the bakery, each time hoping to catch a glimpse of Beatrice, until he finally worked up the courage to go in, contriving a story that she had sold him a stale cake.

His plan seemed to work because, rather than be offended by his complaint, Beatrice says that she liked Lawrence right away.

As it turned out, Lawrence’s friend happened to be dating Beatrice’s cousin, so it was a good way for the two of them to get to know each other better.  Lawrence and Beatrice dated for three years and then got married in 1942 at St. Alphonsus.

At the time of their marriage, Lawrence was in the air force and was forced to move around the country often, especially after the war broke out.  At first, Beatrice attempted to travel with him, but it proved to be too difficult, so she eventually returned to Chicago to live with her parents, getting a job downtown at the war bond office for the duration of the war.  Fortunately, Lawrence was never shipped overseas and returned home safe and sound after a 44-month tour of duty.  For a short time, the couple continued to live with Beatrice’s parents until they found a house of their own on Richmond Street, near Addison, where they spent their whole married life.

After the war, Lawrence found work as an architect, and Beatrice remained a housewife.  They very much wanted children, but when they finally discovered that they couldn’t have any, they applied for an adoption through St. Vincent’s.  Fifteen months later, they were overjoyed to bring home their two-week old son, Howard.

Beatrice says they had a happy life and that she and Lawrence enjoyed staying home as much as going out.  When they did go out, they loved to go dancing and often went to the big dance halls of the day, including the Aragon, the Trianon, and the Merry Gardens.  They also loved to bowl.  Separately, Lawrence enjoyed gardening, and Beatrice was fond of playing sports, her favorite being basketball, and likewise loved to read, bake and crochet.  She held part-time jobs on and off over the years because her doctor advised her to “get out of the house” sometimes.

Lawrence died at age 75 of cancer, and since then Beatrice has been struggling with various health problems as well.  She did not want to go and live with Howard and his wife, Betty, so she arranged to have a nurse come once a week to the house on Richmond.  Recently, however, she was admitted to the hospital and diagnosed with terminal liver disease, forcing her upon discharge to go to a nursing home to live.  She chose to go to the same one as her daughter-in-law’s mother because she always reported that she liked it so well.

Beatrice is an extremely cheerful, sweet woman who is easy to talk to.  She always seems to be in a good mood and optimistic and is pleased with how kind everyone has been at the nursing home so far.  Only once or twice has she been seen crying about her condition, and when asked if she is okay, she quickly stops and claims to be fine.  It is difficult to say how much she may be hiding about her true emotional state, but she seems determined to make the best of what little life remains for her and really desires to be happy.