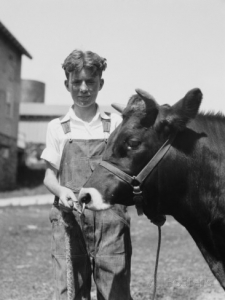 Joseph Wagner was born on July 6, 1912 in Lake Zurich, Illinois to Eckhart Wagner and Klara Schwartz, both of whom were born in Germany.  As a teenager, Eckhart came over with his father, Otto, and they bought a dairy farm together near Lake Zurich.  They sold milk and eggs in town, and at the end of the year, any extra spending money from the sale of the eggs was used for Christmas gifts.  At some point, Eckhart was introduced to Klara Schwartz, and they married not long after.  They had five children: four girls and one boy, Joseph.   Two of the girls, Rita and Elizabeth, died in childhood, and the other two, Marta and Hannah, died of cancer in their fifties.

As a young boy, Joseph nearly died as well.  Apparently when he was seven or eight, he had a problem with his kidneys.  The doctors advised him to refrain from eating meat for one year, though they didn’t really expect him to live that long.  Somehow, Joseph was cured of whatever ailed him, however, and grew up strong and healthy.  He attempted to attend school over the years, but was always being pulled out to work on the farm by his father and  his grandfather, Otto.

When Joseph was twelve years old, his grandfather died, leaving the vast farm solely to Eckhart.  As much as Eckhart had tried over the years to be a good farmer like his father, however, it was not a life he enjoyed, nor was it one to which he was particularly suited.  Unfortunately, not long after Otto’s death, Eckhart fell very ill himself for an extended period of time with some unknown condition , so the running of the farm fell to Joseph, who seemed to take after his grandfather in his enjoyment and skill at farm work.

Thus at only twelve years of age, Joseph took on the responsibility of paying the bills, getting the milk to town, driving trucks, and scheduling the many farm hands in their employ to do all of the chores and duties around the farm.  He was very successful in his endeavor, and his mother, Klara, was very proud of him.  Eventually, however, after about a year, Eckhart got well enough to take back the reins, but he squandered everything that Joseph had built.  Over time, Eckhart became an alcoholic and subsequently began to make many bad investments, so that by the time Joseph was seventeen, his father had lost the farm entirely.  All of their money, as well as their vast property, evaporated in an instant.

Marta and Hannah were already married and gone at this point, so Joseph and his parents were forced out of necessity to find a place to live in town.  Joseph found work as a hired hand on other farms, but when the war broke out, he found work in factories.  He didn’t like being cooped up inside, however, so he then got a job lifting mail bags on and off railroad cars.  It was at about this time that he was introduced through a friend to Mildred Uthe, the youngest of thirteen children.  The two fell in love and married and moved to a farm in Northbrook, Illinois, where they lived with the couple who had introduced them.  Joseph continued working for the railroad, but he also helped out around the farm for extra money.  Joseph and Mildred’s first child, Irene, was born in that farmhouse a year later, in 1944.  Shortly after that, the young family moved to Hutchinson St. in Chicago, where they lived their whole married life.

Joseph worked for the railroad for over 30 years and was apparently a workaholic.  The family never took a vacation because Joseph never wanted to be away from work for long.  Sometimes they got free railroad tickets, so they would go on little weekend trips, but nothing more.  If he did have free time, Joseph liked to garden and to read.  He had an amazing memory and could recall anything, no matter how detailed.

Mildred, meanwhile, cared for Irene and then Alice when she came along in 1949.  Alice was born with club feet and had to wear casts on her legs for a year, which was apparently very worrisome to Joseph.  Later, when she started school, she was labeled “mildly retarded,” which utterly crushed Joseph.  He could not accept that his child was “abnormal” and thus rejected her.  From that point on, Mildred and Irene had to completely care for Alice on their own.  Likewise, Joseph refused to have any social interactions and forbade Mildred from ever having friends or family over because he was so ashamed of Alice.

Joseph had been raised in a very strict evangelical Lutheran synod, which did not approve of dancing, drinking or card-playing.  These were beliefs that Joseph adhered to all his life, though he fell away from the church and scorned any organized religion.  Mildred, however, was Catholic, and she insisted on raising both Irene and Alice in the Catholic Church, though Joseph would not allow them to be a part of any formal Catholic instruction.  As adults, however, Irene took matters into her own hands and began the process of joining the Church and also took Alice with her.   After they were both accepted into the Church, Joseph apparently relented a bit and finally agreed to at least have his marriage to Mildred blessed.

Joseph continued working until he was forced to retire from the railroad in 1981, when he turned sixty-eight.  He couldn’t handle all of the idle time, however, and slipped into a deep depression.  Eventually Mildred and Irene took him to a hospital, where he was admitted for two weeks and given electric shock treatments.  When he was released to come home, he seemed to have forgotten everything, so Mildred and the girls had to teach him how to do everything all over again.  He remained in a “zombie-like” state for over a year before he began to come out of it.

In 1983, Mildred was diagnosed with leukemia, and again, Joseph couldn’t handle it.  He refused to believe that she was ill and never once went to the hospital to see her.  On May 10, 1985, Mildred died at home with Irene tending her.  Joseph refused to believe that she was dead for about six months, constantly asking for her.  This was particularly painful for Irene, who then had to relive her mother’s death all over again each time she had to explain it to Joseph.

Joseph, Irene and Alice continued living in the same house on Pensacola until the mid-1990’s when Joseph’s health began to decline severely.  He became too weak to walk or to even get out of bed.  Also, his mood swings and outbursts were increasing, so Irene finally took him to a hospital, where he was diagnosed with Alzheimer’s and dementia.  From there, Irene arranged for him to go to a nursing home, though it was with much guilt and a heavy heart.

Irene visits her father as often as she can, which is difficult considering the fact that she still has Alice at home to care for.  The sight of Alice seems to rile Joseph, so Irene tries to leave her at home in the care of a neighbor when she visits.  Joseph remains very confused and disoriented.  He has not made any relationships with the other residents and seems to get the most enjoyment from reading the paper or watching baseball on TV.  Only once in a while does he still ask for Mildred.