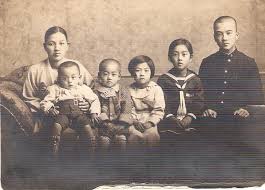 Joo-Won (far right) with some of his siblings

Joo-Won Cho was born on July 12, 1923 in Korea to Kyung Cho and Ha-Yun Kang during the time of the Japanese occupation.  Kyung was a businessman in Suncheon, and Ha-Yun cared for their ten children, of which Joo-Won was number five.

Joo-Won went to school in Suncheon and then went to Japan for college, which was apparently the only place to receive higher education at the time.  He worked hard at college to learn business, only returning to Korea during his school holidays.  In those days, college men were very desirable to the young women in Korea, and Joo-Won, very tall and handsome and sharply dressed in his college uniform, was always popular on his return visits.  During one such break, when he was twenty years old, he met a young woman by the name of Ji-Min Mun, who was eighteen.  Ji-Min was also attending a university, which was very unusual for women in that day.  Joo-Won fell in love with her, and they eventually married.

Shortly after their marriage, Joo-Won joined the army, where he remained for eight years.  He rose to the rank of colonel and was second-in-command of the military police.  When he was discharged, he took over his father’s business.  He and Ji-Min had three children, and Ji-Min, despite having an education, stayed home to care for them.  Joo-Won loved exercising and gardening and was a very social person.  Ji-Min says she was always proud of her “handsome husband.”  Over the years, he and Ji-Min traveled to many countries, including China, Japan and the United States, and even went on a few cruises.

In 1979, one of Joo-Won’s younger brothers who had immigrated to the United States, urged Joo-Won and Ji-Min to also move to the United States so that their children would have a better education.  After thinking about it for a long time, Joo-Won and Ji-Min decided to take his advice, and they moved to Chicago.  All three of their children were then able to go to high school and college here in the America, and all three became very successful.  The oldest son is now living in California, their daughter lives in Texas, and the youngest son lives in Grayslake, Il.  Also, they had a nephew in Los Angeles who served as a congressman for nine years.

Joo-Won was always very healthy, and he and Ji-Min enjoyed their retirement until Joo-Won unexpectedly had a stroke in 1994.  He then developed a seizure disorder, which caused him to repeatedly fall and injure himself, each time more severely.  The family tried to care for him at home, but it eventually proved to be too much, especially with none of the children living close.  After much debate and soul-searching, they finally admitted Joo-Won to a nursing home, much to their shame.

Joo-Won spent nearly two years in the nursing home, during which time he did not once complain.  His family, however, began to feel that he was not getting enough social interaction and therefore slipping into a depression.  So, despite the fact that they did not want him to have to go through the upheaval of another move, they recently decided to transfer him to a different facility with a high number of Korean residents in the hope that he will join in more with people.

So far, Joo-Won seems to be making a relatively smooth transition to the new place and is always calm and agreeable.  It is difficult to know what his true mental state is, though, because the staff can only speak to him only through interpreters.   His wife, Ji-Min, reports that he is happy, but the staff rarely see him smile.  He does occasionally talk with other Korean residents, but only if he is led to them.  He seems to have a hard time initiating conversation but will answer questions.

Ji-Min is still upset that she can’t care for him at home, but she visits each day even though it now takes her over an hour to get here.  For this reason and because she misses him, she says that she is thinking of admitting herself here so that she can again live with him.  “He was always such a calm man,” she says.  “He loved his children very much and was always a compromiser.  He hated arguing.”

Joo-Won’s children agree with this.  “He was always a gentle person,” says their daughter, Duri, “despite being a colonel in the military.  Or at least he was at home,” she adds.  “He never wanted to talk about his work or what it was like to grow up under the Japanese occupation,” she says.  When asked about it, she explains, he would refuse to answer except to say, “Nothing good can come from speaking of those days.  That’s in the past.”