Proud to Have “Opened the Books” 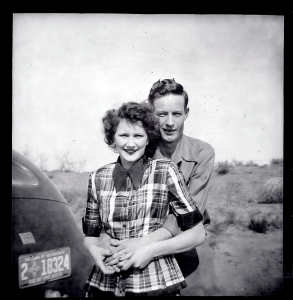 Ruth Hughes was born on June 4, 1906 in Chicago to Virginia Ward and Raymond Oveson. She had three brothers: Walter, Raymond, Jr., and Albert, though both Raymond, Jr. and Albert died as infants.  Ruth attended two years at Cathedral High School before quitting to begin working at the telephone company.  She then moved into bookkeeping and was always extremely proud that she “opened the books” for Little Company of Mary Hospital when it was newly built.

When Ruth was around twenty years old, the couple that lived in the apartment above her family introduced her to a young man they knew by the name of Kelly Hughes, who was five years her senior.  Kelly, it seems, was orphaned at age 15 in Ireland.  His father was killed in the Great War, and his mother died of an illness a year later, leaving him alone.  Not wanting to be a burden to his relatives, he made his way to England and then to America, where he found a job as an electrician, a job he kept for over 40 years.

Ruth and Kelly dated for three years, during which time they fell in love and then married.  During their courtship, their favorite date was either “going to the pictures” or walking in Humboldt Park.  After they were married, Ruth continued working as a bookkeeper until their first child, Kenneth, was born.  She stayed home with him and their daughter, Sally, when she “came along” a couple of years later.  Sally says that Ruth loved being a housewife and was devoted to them and their father.  She loved baking and sewing, movies and dancing, but she especially enjoyed any kind of family gathering or celebration, such as birthdays, weddings or showers.  She was also very active in her parish of Immaculate Heart of Mary.

Sally says that Ruth and Kelly had a very calm, loving relationship and describes both of them as being very gentle, compassionate people.  They mostly enjoyed being at home, but they did take a few family vacations to Wisconsin, Missouri, New York and even once traveled all the way to Ireland to see Kelly’s birthplace.

As the years progressed, both Ruth and Kelly’s health began to deteriorate, Ruth especially when she was diagnosed with Alzheimer’s.  Not long after that, Kenneth had them move in with his family and cared for them for six years, at which point Sally took a turn and brought them into her home for another four.  After ten combined years of trying to care for them at home, however, both Kenneth and Sally decided that the best place for their parents would be a nursing home.  Ruth and Kelly were admitted together and shared a room until Kelly passed away after only a year in the home.

Ruth is very disoriented now and rarely speaks.  She does not recognize Kenneth, who visits every weekend, or Sally, who visits daily, and can no longer communicate with them except for holding their hand while they watch TV together.  Kenneth and Sally do not seem to feel any guilt or anxiety about their mother’s placement, and both only want Ruth’s last bit of time to be full of the gentle love and comfort she gave to them for so many years.