Otto and the Cross-Country Journey to Get Back Their Girls 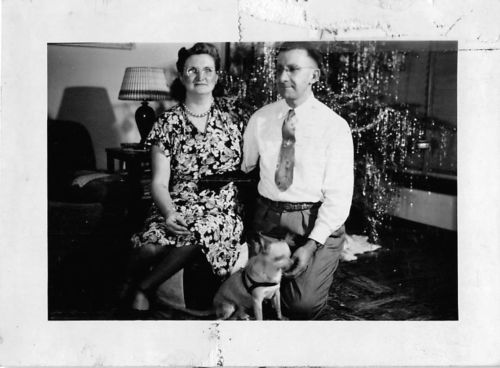 Otto Hutmacher was born on November 12, 1907 in Prussia to Poldi and Magda Hutmacher.  Poldi was a carpenter, and Magda cared for their eight children.  Otto only went to the equivalent of grade school and then got a job driving a team of horses for the government.  “It was a life of starvation,” he says, so at age 23, he ran off to join his brother, Ernest, in America.  Ernest and his wife, Marie, had already immigrated several years before and had written letters to tell the family that there were many jobs.  Poldi refused to leave, however, and when Magda tried to plead with him, he beat her.  All of his brothers lived in fear of Poldi, so Otto took off by himself to make the journey to America.

Once here, he found Ernest and Marie in Chicago, where they had already saved enough to buy a house.  One by one, the siblings eventually all came, though Poldi and Magda stayed and eventually died in Germany.

Otto was able to immediately find a job at the Continental Can Company, where he worked for eight years.  From there, he got a job at a place called Goodmans, which was a tannery.  Otto enjoyed this work and stayed at Goodmans for over thirty years.

In his forties, Otto met a woman “from the neighborhood,” which was Southport and Clybourn, at a bowling alley—Otto’s one hobby.  Vera Rudaski had been born in Poland and had immigrated here as a young girl.  She received little schooling and worked in a variety of factories around the city.  Otto finally worked up the courage to ask her out, and they began dating.  He was shocked, however, when he stopped by her house one day as a surprise, to find two young girls living there with her.

It was then that Vera reluctantly explained to him that she had gotten pregnant when she was only seventeen and had a baby, Dorothy.  The father of the baby abandoned Vera, and she never married.  She was forced to then raise Dorothy on her own, as her parents would have nothing to do with her after they discovered she was pregnant out of wedlock.  It was a difficult road, Vera told him, and Dorothy was often left alone at home while Vera worked.  As she got older, Dorothy began to get into trouble, and Vera found it hard to control her as the years went on.

Vera was heartbroken, then, when Dorothy came home one day and told her she was pregnant.  Vera tried to convince Dorothy to give the baby up for adoption, knowing firsthand how difficult it was to raise a baby alone, but Dorothy just laughed and said that that was what mothers were for.  She wouldn’t hear of giving up her baby, especially after she unexpectedly gave birth to twin girls, whom she named Flora and Fern.  Vera saw no choice but to help Dorothy care for the babies as much as she could, but it was difficult to do while still working.

To make things worse, when the twins were just over a year old, Vera came home from work one day to find the twins crying in their crib and Dorothy gone.  Vera found a note from Dorothy which said that she was leaving with a boyfriend for Las Vegas and that she would be back when she had made some money.  At that point, Vera didn’t have the heart to put the twins in an orphanage, so she struggled along as best she could.  Only periodically did she ever receive a letter from Dorothy, but never with any money enclosed.

After Otto discovered the twins at Vera’s house, he asked her why she hadn’t told him about the girls in the first place.  Vera replied that she didn’t think he would be interested in her if he knew she had little kids to take care of.  Otto’s response was to ask Vera to marry him.  She happily accepted, and he moved into the house with Vera and “their girls.”  At the time, Flora and Fauna were six years old, and they took to Otto right away.  The girls called Vera and Otto “mom” and “dad,” which suited the two of them fine.  Vera was too old to have any more children, so they both enjoyed the girls as if they were their own.

Things went along well enough until, sadly, Dorothy reappeared on the scene out of the blue when the girls were just eleven years old.  She had a new husband, Bill, she said, who had convinced her to come back and get the girls to live with them in Vegas.  Not only was Dorothy angered by the girls’ shy reception of her, but she was outraged when she heard them calling Vera “mom” instead of “grandma.”  Hurriedly she packed them up and took off with them, though Flora and Fern screamed and cried at being removed from Vera and Otto.  Otto tried everything in his power to convince Dorothy to change her mind, but to no avail.

The girls stayed with Dorothy and their step-father, Bill, for almost a year, writing home constantly, saying that they were miserable.  Their step-father was almost always drunk, they said, and they were afraid of him.  Likewise, Dorothy had yet to enroll them in school.

Meanwhile, with every month that passed, Vera sank deeper into depression.  Nothing seemed to interest or rouse her.  It was at that point that Otto decided to take matters into his own hands and planned a trip across the country to Las Vegas to try to get their girls back.  He eventually found Dorothy and the girls living in a filthy apartment, just as the girls had described in their letters.  He offered Dorothy and Bill all of his savings in the bank if they would agree to let them have the girls back.

Bill, deeply in debt, agreed, and even Dorothy, though she protested some, didn’t seem to mind that much.  Otto, on the other hand, was overjoyed.  He drove almost non-stop to get back to Chicago and Vera.

When they arrived, Vera was beside herself with joy, but she was worried about what the girls must have been through with Dorothy and Bill.  Likewise, while the girls were happy and relieved to be back home, they were not quite the same as they had once been.  They were quieter now and more distrustful.

Things eventually progressed, however, and life went back to normal as much as possible.  Otto and Vera had few hobbies and wanted to spend any free time at home with their girls.  Flora and Fern eventually went to high school and then got married.  Otto and Vera took a couple of trips when they retired, but they mostly stayed at home and enjoyed spending time with Flora and Fern’s children, whom they called their grandchildren, though they were really Vera’s great-grandchildren.

Otto and Vera lived on their own in the same house until 1992, when Vera died peacefully at age 85.  Otto was able to care for himself for a while before he started to get very confused and wander.  After he was repeatedly found lost in the neighborhood, Fern took him in for a time.  When she herself was recently diagnosed with cancer, however, and it became too much for her to care for him as well.  With a heavy heart, then, the girls—now getting up there in years themselves, placed Otto in a nursing home.

Otto seemed to be make the transition well at the beginning and enjoyed many of the activities involving music in particular, but he has since begun to decline a great deal.  He is now confused and disoriented most of the time and sometimes does not even recognize Flora or Fern when they come to visit.  Often he makes nonsensical comments, such as “I won’t die because I live in a mountain.”  It makes Flora and Fern very sad to see him this way, but they are happy he is being cared for, as they are not able to have him live with them.  They still call him dad.