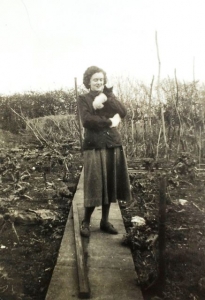 Maria Kumiega was born on June 7, 1913 in Poland to Albert and Milena Gajos.  Milena’s maiden name was also Gajos, though Maria says her parents weren’t related.  Albert owned a small farm, and Milena cared for Maria, who was just a baby when World War I broke out.  Albert was soon rounded up to serve in the Russian navy, and tragically, he never returned.  Milena eventually remarried, but while giving birth to her first child with her new husband, both she and the baby died.  Maria’s new stepfather could not even stand to look at her and therefore disowned her, making Maria essentially an orphan at age eight.

Eventually, it was arranged for Maria to go live with an uncle in a distant village.  Her life with her uncle wasn’t terrible, she says, though she was not treated like the other children in the family and was made to work very hard.  She received only a couple of years of schooling, but she was eager to learn and taught herself to read and write, despite the long hours she put in around the house and farm.

It is not surprising, then, that she married very young—at sixteen—to Daniel Kumiega, a boy she had grown up with in her uncle’s village.  Daniel, a few years older than her, saw how difficult it was for Maria in her uncle’s home and was subsequently very kind to her.  Often he would bring her a sweet wrapped in his handkerchief on a Sunday.  Maria had to hide her gifts from Daniel from the family, but she looked forward to his visits very much.  She grew to love him, even from a young age, so when he asked her to marry him, she didn’t have to think about it at all and immediately said yes.  She had hoped to use the land owned by her parents as a dowry, but it had long-since been been confiscated, by whom exactly, Maria was never sure.  Thus, Maria came to Daniel with nothing, but he claimed not to mind.  He quickly found work on a nearby farm, and Maria soon had a baby, Marta, to care for.

Maria does not like to talk about the Second World War and does not say how the little family survived it.  She merely comments that when it was finally over, there was little opportunity to make a living.  They did not want to stay in Communist Poland, so in 1948, they escaped to France.  Daniel found work on farms there, and they remained for thirteen years, during which time another child, Bosko, was born.

When the French economy took a downturn, however, Daniel could no longer find any work.  He was forced to take a job in the mines, though the conditions were grueling.  Eventually, Daniel could no longer take the back-breaking work, and, likewise, he found it especially hard to be underground all day when he had spent his life working outdoors in the fields.  Desperate, they decided to immigrate to America and applied to the Catholic League for help.  Finally, around 1961, they made it to Chicago.  Their son, Bosko, came with them, but Marta remained behind as she was already married.  Daniel found work as an unskilled laborer in factories, and though it wasn’t outdoor work, he was grateful that he was no longer in the mines.  Eventually, Marta and her husband and children made their way over, too.

After saving for a long time, Maria and Daniel were able to buy a small house in Humboldt Park, which was Maria’s pride and joy.  Unfortunately, however, Daniel died in the early 1970’s, making it very hard for Maria to hold onto the house with only a job as a cleaner.  Neither Bosko nor Marta were not able to help her financially, as they were both struggling themselves to raise families and to pay a mortgage.  Finally, then, as the neighborhood grew worse and worse and Maria became more and more afraid, she sold the house for much less than it was worth and bought another one closer to Bosko.

Maria was happy in her new house and remained an active member of St. Hyacinth’s parish.  She also spent much of her time gardening, her favorite thing to grow being roses.  She has remained independent until very recently when she was diagnosed, at age 83, with renal failure.  She requires more help now and has difficulty getting around.  For several months, both Marta and Bosko have been trying to stop over to help her or to bring groceries, but the stress has begun to wear on them, especially as they are not on speaking terms with each other.  Apparently, they separately approached Maria to suggest to her that she go into a nursing home, the thought of which was initially very disturbing to Maria.  Maria begged to instead live with one of them, but  Bosko explained that it would be difficult to care for her since no one would be home with her all day, as everyone in both families either worked or went to school.  No one would be there, Bosko pointed out, if she fell or needed help.  Eventually, then, after several months of thinking about it, Maria agreed to go to a nursing home.

Maria has made a relatively smooth transition to the facility, though she likes to remain in her room alone unless the staff urges her out to socialize.  Once outside of her room, she enjoys speaking with other Polish residents and attending Mass and bingo.  More than anything, however, she looks forward to visits from Marta and Bosko, though they are careful never to visit at the same time, as they claim to hate each other.  Maria, thankfully, seems not to be aware of this.  At first, the staff did not even realize that Maria had a daughter, as, during the admission process, Bosco, who arranged it all, neglected to mention that he had a sister.  The staff were very surprised, then, when Marta appeared one day, claiming to be Maria’s daughter.  Bosko then admitted that he did have a sister, but stated, “she is too stupid” to be of much help.  The staff are trying not to take sides, though several have observed that Bosko frequently smells like alcohol when he visits, even if it is in the morning.

Maria meanwhile seems unaware of any family disunity and is simply grateful if one of them turns up.  If the weather is very warm, she can sometimes be found sitting in the gardens on her own.  “I’ve had a hard life,” she says, “but it hasn’t been all bad.”