“Old Before Her Time” 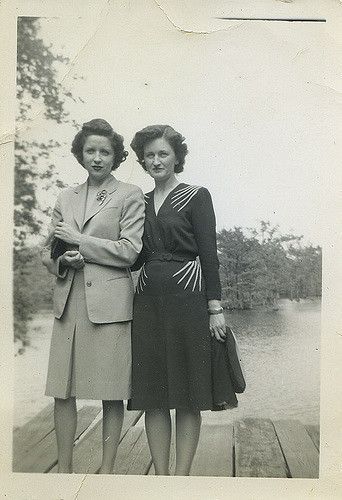 Rosemary Luckstrim, left, with a colleague from work

Rosemary Luckstrim was born on September 5, 1912 in Chicago to Ora Feigel and Peter Luckstrim, both of whom were of Irish/German descent.  Peter worked on and off in factories, and Ora cared for their four children: Roger, Millicent, Rosemary and Bert, though both Roger and Millicent died as infants.

Rosemary graduated from 8th grade and attended a two-year technical high school to learn to be a secretary.  Right before she finished, however, her mother, Ora, passed away.  Bert had left home long before, so it was left to Rosemary to care for her alcoholic father.  Peter no longer held a job, so Rosemary became the sole provider.  She managed to get a job working as a secretary in Environmental Control for the Federal Government.

Rosemary was apparently a very private person and had just a small circle of friends.  She enjoyed reading and playing cards with friends when she was a young woman, but became more and more involved in her parish, St. Andrew, as time went on.  Rosemary was a deeply religious person who attended daily mass and was always volunteering in different ministries and spent a lot of time visiting the sick.  Her whole life was about doing things for others.  Her dream was to enter religious life, but she felt like she could not because she had to stay home and care for her drunken father.

Besides the church, Rosemary’s other passion was her work.  She enjoyed what she did and the people she worked with and was thrilled that she got to travel so much, including going to Washington DC and Alaska on business.  She also took a lot of trips on her vacations, often persuading work friends to with her.

Rosemary was devastated, then, when she was “let go” at age 65 because the company wanted to hire a younger person with a college degree to do the job she was doing.  Rosemary accepted her “retirement” with grace, but privately lamented her loss, often complaining that her years of on-the-job training should have counted for more.

According to Rosemary’s cousin’s daughter, Joan Mynatt, Rosemary never got over what she saw as her forced retirement, even though she was of retirement age when it happened.  Joan is the only remaining family member whom Rosemary has left.  Peter died at age fifty-five of pneumonia, and Rosemary’s brother, Bert, died at age forty of a heart attack.  He had never married.  Joan says that Rosemary became increasingly withdrawn and reclusive as time went on and that she was never the same after she stopped working.

“She didn’t really have a life,” Joan says, and likewise that she “grew old before her time.  But then again,” says Joan, “she was always an old soul.”  Rosemary eventually became afraid of people and paranoid and refused to ever leave her house.  She womld ask Joan to do errands and go shopping for her even though she was physically able to do so herself.  “Everything became difficult,” Joan says.  Going to the doctor or the dentist, even going out to lunch with Joan, all became too stressful.  Instead, she preferred to stay at home and pray.

In the early 1990’s, Rosemary began to experience confusion in addition to her paranoia.  Fearing for her safety, Joan arranged for Rosemary to move into an independent living facility, but she was already too confused to function there.  Joan then placed her at St. Benedict’s nursing home because they had a nice chapel and a religious setting, which Joan thought Rosemary would enjoy, despite the fact that it was a far drive from where Joan lived.

Rosemary’s mental confusion grew worse, however, to the point that she did not utilize the chapel or even seem to understand where she was, so Joan moved her yet again so that she would be in a facility which was close to her so that she could visit more often.

Rosemary is making a relatively smooth transition to the new home, though she does not participate in activities, and she has difficulty with conversation.  She does not seem aware of where she is, which, says Joan, is actually “a blessing.”  Only occasionally is Rosemary combative, and she spends a lot of time “watching” something on the ceiling, which she at times tries to communicate with.  Joan seems to be coping well, as she just recently went through this whole process with her own father, who recently passed away in a nursing home.  “I know what’s coming,” she says.  “I just want Rosemary to be as comfortable as possible until the end.”