An Obsession With the House on Strong Avenue 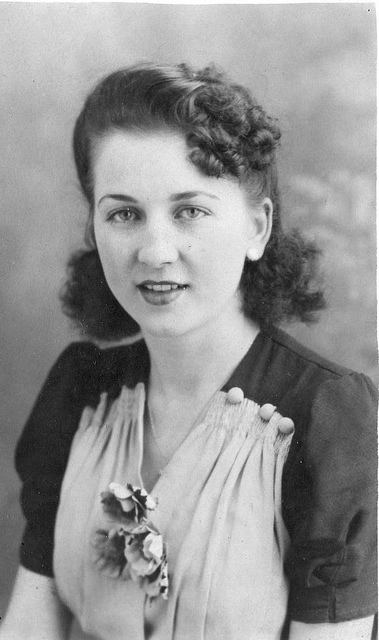 Zita Fodor was born on May 12, 1913 in Budapest, Hungary to David Fodor and Terezia Kozorus.  It is unknown what type of work David did while still in Hungary, but when he and Terezia immigrated to America, he found work in Chicago as a tool and die maker.  Terezia cared for their two children, Zita and Gyorgy (George).  It is interesting to note that David was a Lutheran and Terezia a Catholic.  Obviously, this did not stop them from marrying, and they raised their children this way, too.  Zita followed her mother and leaned toward Catholicism, while George leaned toward being a Lutheran like his father.

When the Fodors first arrived in Chicago, they rented a small apartment on Northwest Highway.  Later they rented a place on Strong Avenue, and then finally purchased their own home just a few blocks up from where they had been renting.  The Fodors lived on the first floor and rented out the upper floor for all the years that Zita and George were in school.

Zita graduated from eighth grade and then got a job as a nanny for a wealthy family.  Sometimes she even traveled with them to their summer home in Michigan.  She did this for several years, until her mother, Terezia, died of liver cancer.  Zita came back home, then, to care for her father and brother and got a job as an assembler in a factory that made televisions and radios.  Later she quit to take a job at Switchcraft on Elston Avenue, again as a machine operator.

Zita was very devoted to her father and brother, but when the upstairs apartment became available, she surprised them by announcing that she was going to move into it herself.  She would still cook and clean for them, she explained, but she wanted her own space.  Not long after that, her brother, George, announced that he was getting married.  Zita was extremely upset by this news, not wanting anything else to change, and tried to talk George out of it.  When George informed her that he had every intention to go through with the wedding, Zita had no choice but to accept it, though she was cold to George’s wife, Marie, for many years after.  In fact, says Zita’s niece, Donna, “the two of them never got along,” no matter what Donna’s mother, Marie, did to try to please Zita.  “She was a person that hated change,” Donna explains.  “It was very stressful for her.”

Zita was further upset when George and Marie announced that they planned to rent an apartment down the street after the wedding.  Desperate to keep the family together, Zita offered to move back in with her father so that George and Marie could have the upstairs apartment.  George, however, wanted his own place and declined, much to Zita’s disappointment.  As it turned out, it wouldn’t have worked anyway, as her father remarried soon after as well, and his new wife, Sophia, moved in.  Again, Zita was very upset at the prospect of yet another change, and seemed to go out of her way to make life miserable for her new stepmother.

Though she was now the only single one in the family, Zita had no desire to ever get married and often loudly said so.  She was fiercely independent and wanted to stay that way, claiming that the idea of marriage was “abhorrent” to her.  Her father believed that perhaps she just hadn’t met the right man yet and set about trying to find his daughter a husband.  Eventually he introduced Zita to a young Hungarian immigrant by the name of Elek (Alex) Lukacs whom he knew from work and whom he was very fond of.  Elek began to spend a lot of time at the Fodor house and eventually worked up the courage to propose to Zita, who promptly refused him.  Her father was angered by this and tried to force Zita to marry Elek, but she refused and remained unmarried and independent her whole life.

One thing that the Fodors all had in common was a fierce attachment to their house on Strong Avenue.  For Zita, it was more than an attachment, however; it was almost an obsession.

When Zita’s mother, Terezia, died, her father had a will drawn up in which he bequeathed the house on Strong Avenue to both Zita and George.  He stuck to this decision even after he married Sophia.  So when he died of a massive heart attack and Sophia discovered that she would not get the house, she was furious.  There was not a lot of love between she and Zita and George, so, in the end, Sophia was eventually forced to move out and went to live with relatives.

Zita remained in the upstairs apartment, and she and George rented out the bottom floor.  In addition, George decided to honor his father’s last wishes to bequeath his share of the house to Zita, should he die before her, instead of to his wife, Marie.  Years later, however, he discovered that Zita had not reciprocated, as she was supposed to have done.  He somehow found out that she had in truth wrote a will in which she intended to leave her share of the house to the American Indians, her one true passion in life.  Furious, George changed his will and left his share to Marie.

Unfortunately, like his father, George also died of a heart attack.  His share of the house accordingly went to Marie, who obviously had her own house, so their daughter, Donna, moved into the first floor apartment of the house on Strong.  Donna eventually married and had two children and still lives in the little house on Strong Avenue.  Over the years, she has managed to melt her eccentric Aunt Zita’s heart.  Likewise, Donna and her family have grown to love Zita and have been caring for her as she has aged.

Zita eventually retired from Switchcraft but had little to do to fill her time.  She had no hobbies besides reading about American Indians and had few friends.  “She’s gotten more and more introverted and eccentric over the years,” says Donna.  Her health has continued to get worse, and she has needed dialysis for several years now.  Just recently, however, she has refused to have any more dialysis treatments and decided instead to go into a hospice program in a nursing home, as she now has so many problems that Donna cannot handle them all.

Donna has helped her to get settled into the nursing home, bringing her many of her things from home, but Zita is not making the adjustment well.  She is depressed and irritable most of the time and will not get out of bed unless forced.  She has no interest in the other residents or any of the activities offered.  At times she can be pleasant with the staff, but usually she pretends to fall asleep while being spoken to.  Donna and her family continue to visit as often as they can, but Zita seems to get no joy even from that.

When asked about her house on Strong Avenue, Zita says she has changed her will so that it will go to Donna and hopes she will never sell it.  She says that “it was the first thing we owned in a new country, and we were extremely proud of it.”