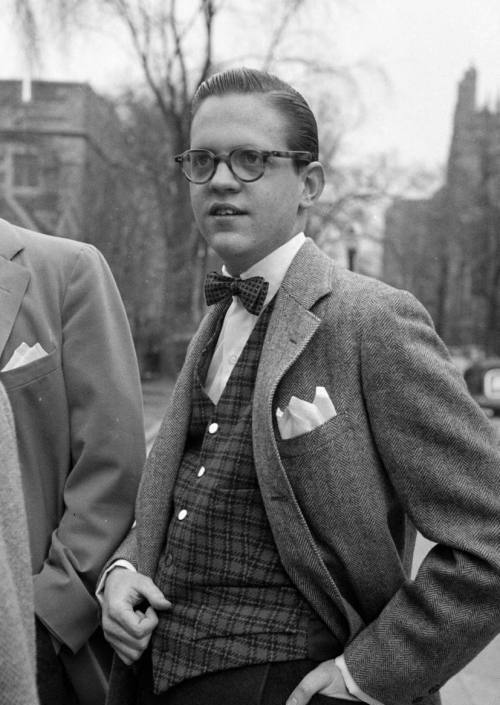 Elbert Gurecki was born on December 29, 1912 in Chicago to August Gurecki and Barbara Korczynski, both Polish immigrants.  August came to Chicago in 1905 and got a job at Crane Plumbing where he worked for the next forty years.  Barbara also arrived in America around that same time, having come here from Poland to live with her older brothers and sisters who had already immigrated.  She worked at various odd jobs until she met August at a neighborhood dance and married him.  Together they had six children, though two passed away.  Their first child, John, died shortly after birth.  A year later they had Olga, followed by Elbert, Clifton, Freda, and Estella.  Clifton died when he was seven of diphtheria, which Elbert almost died from, as well.  Elbert survived, however, but was always sickly and thin.  Often left at home while his siblings went to school, he developed a passion for model airplanes.

As he grew older, Elbert became stronger and began attending school, quickly catching up to the grade level at which he was supposed to be.  He was intelligent and went on to high school, where he attempted to join the R.O.T.C, but he was rejected because of his low weight.  He was also rejected from the football team for that same reason.

To compensate for his disappointments, he turned to his childhood hobby of model airplanes and with the help of some friends, began building small motorized planes that could actually fly.  Eventually this small group of young men saved enough money to actually rent a real plane, which they flew out of Palwaukee airport to Madison, Wisconsin and back.  Elbert loved flying, and he and his friends dreamed of becoming a pilots.  It was an expensive hobby to maintain, however, and it was also thwarted when their interests began to shift toward the opposite sex.  “Girls with lapdogs got in the way,” Elbert says.

All of his friends began dating and got married just after high school.  Elbert says that he dated several girls but never found the right one because “I didn’t try very hard.”  In true George Bailey (It’s a Wonderful Life) fashion, he had “visions of traveling around the world a few times” or “owning a big business.  Marriage wasn’t that important to me.  I didn’t want to get tied down.  But,” he says, “I never seemed to get around to much of anything.”

After high school, he spent the summer working on various farms in Wisconsin and Michigan, though it didn’t pay a lot.  “The fishing is what drew me to want to work in Michigan,” he says.  In the fall of 1931, he started at college and again tried to get into the R.O.T.C., but was again rejected due to weight.  “I guess it was a good thing,” Elbert says, “because then the war broke out.”  After college, he went on to get a master’s degree in journalism from Northwestern.  From there he went to University of Illinois with the intention of getting his doctorate, but eventually grew tired of it and quit.  He worked for various newspapers for several years until he quit those, too, saying that “journalism grew boring from sheer repetition.”

At that point, Elbert decided to take time off to travel, which had forever been his dream, but he didn’t get very far, as he soon ran out of money.  “California is where everybody went and came back a star, but I never go around to it.”  He never went to Europe as he had hoped.  He sums up life in this way: “Life is like Christmas time when you get a new set of golf clubs and you think, ‘that’s for old men.  I’ll put them away and dig them up later.’ But then I never did, and now it’s too late.”

After his brief travel stint, Elbert mostly worked odd jobs and lived at home, caring for his elderly parents, both of whom died of TB within two months of each other in 1956.  After his parents passed away, he got a job as a researcher at a law firm and then went to Foundation Press, which later became Wolters Kluwer/CCH.

Elbert continued living in his parents’ house, never marrying, though he says he enjoyed being “Uncle Elbert” to his many nieces and nephews.  “Kids like me,” he says.  “I’ve always valued that.  I’ve always been Uncle Elbert.”  Elbert retired at age 72, and has continued to live on his own, pottering about his house in relative independence.  He has two cousins, Bonnie and Lynn, living in the suburbs who have been driving into the city every week to check on him.

Sadly, in early 1996, his cousin, Lynn, found him unconscious on the floor.  She called an ambulance, and he was taken to the hospital and diagnosed with lung cancer.  Based on his prognosis and the fact that he has no one at home to care for him, his doctor recommended that Elbert be admitted to a nursing home.  Bonnie and Lynn were reluctant to make that decision for him, but after talking with the hospital social worker, they decided that it would be the best place for him, especially as his house has become more and more rundown and dirty.  Likewise, he had stopped eating while at home, despite the fact that both Lynn and Bonnie were bringing him food.

At the time the decision was made, Elbert was not fully conscious and therefore did not participate in the decision.  Since his admission to the nursing home, he has become more alert and now wants to go home.  He is having a hard time accepting why he has to be here and is angry and anxious most of the time, except when telling his story.  Despite his depressed state,  he is very humorous and bright when speaking and can easily make people laugh.  It’s not hard to see why he was so popular with kids.  The staff are trying to involve him as much as possible in an attempt to get him to accept his new home and have talked to him about the possibility of hospice care. His favorite thing to do so far, however, is reading the Chicago Tribune every day and watching the White Sox on TV.