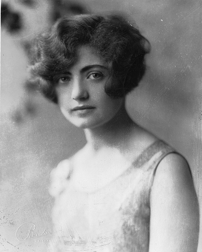 Leona Wilson was born in Oklahoma on December 16, 1906 to Nigel Wilson and Elizabeth D’Evers.  Nigel was born in England and had a passion for the American Wild West since the time he was a little boy.  So strong was his desire to be a cowboy that he ran away from home as a teenager and got a job on a ranch in Colorado.  His father eventually tracked him down and made him return to England to finish his education, promising that once he did so, he would be free to do as he liked.

Nigel accordingly graduated from university with a degree in business and immediately returned to America.  He first went to Chicago, where he met a young woman, Elizabeth D’Evers, at the Presbyterian Church he was attending.  The two of them began dating while Nigel worked in an accounting firm to earn money to go back out west.  Eventually, Nigel and Elizabeth married and had two children, Edmund and Gerald, before they had finally saved enough money to buy a ranch in Oklahoma.

Once settled in Oklahoma, the Wilsons had three more children: Margaret, Leona and Catherine.  Leona says that Margaret was her “mother’s pet” and could do no wrong.  She was very spoiled, and, consequently, Leona hated her.  The Wilson’s remained on the ranch for about ten years before Nigel decided he had had enough.  Somehow, ranch life was harder than he had remembered it being as a boy.  The family moved again, this time to Denver, where another baby, Herbert, was born.  Leona says that she hated Herbert more than she hated Margaret, as he was “a terrible brat and annoyed everyone.”

Leona reports that she had a tolerably good childhood.  Her family, she says, wasn’t terrible; their great sin was that they were “so damned mediocre.”  She carries a bit of a chip on her shoulder, however, as she feels like she was pretty much ignored and even cheated by her parents.  Margaret and Herbert, she says, got everything they wanted, while “I was given nothing,” she says.

Leona remembers begging her parents for violin lessons, for example, but they refused to waste money on such a thing.  Later, she begged for art lessons, but they again “ignored me and never encouraged me at all!”

After Leona finished elementary school, Nigel and Elizabeth decided to divorce.  Leona is not sure why, but she thinks it might have been because Elizabeth wanted to move back to “civilization.”  Thus Elizabeth took the three girls and Herbert and returned to Chicago, while Nigel and the two oldest boys remained in Colorado.

Elizabeth and the children moved in with her parents, the D’Evers, and Leona started high school.  She eventually graduated and then begged to be allowed to attend the Art Institute, but Elizabeth and her well-to-do parents refused to throw money away at such “utter nonsense.”  Leona wrote to her father, asking him to pay for her education, but he also refused.

Deeply resentful, Leona got a job and put herself through school.  When she finally graduated with an art degree from the Art Institute, she only had enough money to rent a little studio, where she worked and also began giving art classes.  She didn’t have enough money to move out of her grandparents’ house, though, and thus had no choice but to remain there, even though she had grown to seriously dislike them over the years for their “snobbish superficiality.  They thought they were something because they had a ‘D’ in front of their name,” she says.  “To me, it stood for ‘dumb.’  They thought they were so aristocratic, and it was ridiculous that they only respected people who had more money than them.”

Leona tried her best to ignore her family and their disparaging comments and threw herself into teaching.  “It is the greatest fun to teach children,” she says, “because you don’t teach them, they teach you!”  After a year of teaching, however, Leona decided to go to New York for a weekend to get away from her mother and grandparents and to also see art museums and galleries.  In just a couple of days, she fell in love with New York and returned to Chicago with the intention of packing up and moving there.

She was in the process of going around to different galleries and studios where her friends were to say goodbye, when she happened to meet a new artist, a man by the name of Sherman Abrams.   Leona was immediately drawn to Sherman and his work and began following him all around town.  She says that she fell in love with him instantly and describes it as “Pow!”  Sherman, apparently aware of Leona’s feelings for him, initially tried to avoid her, as he mistakenly thought she was only fifteen.  Leona kept finding him, however, and repeatedly invited him to her studio to see her work.  Each time he would agree to come but then not show up.  Still Leona persevered.

Frustrated by Leona following him, Sherman eventually asked a mutal friend how old she was.  The friend said that he thought Leona was in her twenties.  Surprised, Sherman finally went to her studio, burst through the door and said “Just how old are you?”  When she told him she was twenty-two, he immediately asked her out on a date.

Sherman and Leona eventually married and had two children: Pamela and Rose.  Sherman became a very successful commercial artist, and he and Leona were very happy for a time.  Sherman’s brothers all loved Leona, apparently, but his mother did not.  She resented the fact that Leona wasn’t Jewish, and tried to “make our life miserable,” Leona says.  Eventually, the pressure became too much, and the two of them decided to divorce.  Leona says that she “grew beyond him.”   He was very “juvenile and childish, and his mother wanted him to stay that way.”

After the divorce, Leona packed up Pamela and Rose and moved to New Orleans, where she happily joined the artist community there.  She enrolled the girls in a “very good public school in the French Quarter” that emphasized art.  Meanwhile, Leona painted, exhibited and taught in various schools.  She feels that she was very successful as an artist and as a parent.  She is extremely proud of the fact that she devoted so much time to taking her children to see art exhibits, plays, museums and galleries while other women “were at home exchanging housework stories.”  She devoted her life to her art and her children and encouraged them to explore any artistic avenue they desired.

As it turned out, upon her graduation from high school, Pamela decided she also wanted to attend the Art Institute.  Leona was thrilled with this decision and saw “a lot of promise” in Pamela’s work.  Accordingly, she moved them all back to Chicago and contacted Sherman about helping to pay for Pamela’s tuition.  She was dismayed when he refused to “give me one cent!”  Leona could not believe that Sherman, himself a successful commercial artist, would not encourage his daughter to study art and concluded that perhaps he was jealous of Pamela’s skill.  Even now, Leona still seems fixated on this episode in her life, even after so many years have passed.  She repeats this story over and over until redirected.

Leona was determined that Pamela should go to the Art Institute, however, and took on two jobs to make the money to pay for it.  “I worked night and day,” she says proudly.  Similarly, when Rose graduated from high school, she expressed a desire to attend Hunter College in New York to pursue writing.  Again, Leona worked two jobs to put Rose through.  When both girls were finally finished college, Leona returned to New Orleans to pursue painting and also took up sewing.

Leona remained in New Orleans, living independently, until just about four years ago when she began having difficulty with her health.  Pamela suggested that she move back to Chicago.  Leona agreed and moved in with Pamela, at Pamela’s invitation, and continued to paint a bit.  Not long after the move, however, Leona’s health began to seriously worsen.  She had a stroke and also went legally blind.  Added to that, she has recently been diagnosed with the beginnings of dementia.  She was hospitalized for several weeks after her stroke, and upon her release, the hospital discharge staff recommended nursing home placement.

Leona is very upset about her new living arrangement and has a lot of anger toward Pamela, whom she says “dumped her here.”  In turn, Pamela is very sharp toward her mother when she visits, which consist of five- to fifteen-minute intervals.  In her more rational moments, Leona says that she understands that it would be impossible to still live with Pamela, but she seems to quickly forget this and grows angry all over again, saying that she paid for half of Pamela’s house and that she should be allowed to live there.  At other times Leona is calm and pleasant and attempts to socialize with the other residents.  It is hard to participate in activities, though, because of her blindness.  She says that she can see light and dark, but no color.  “Can you imagine that?” she asks.  “What living in a colorless world is like to an artist?”  Over all, she seems to be trying to make the best of her situation, but, she says, “I feel empty inside.”