The Maid, the Asylum, and the Old Cubs Field 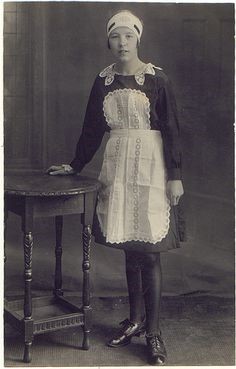 Agnes Faraldo was born on April 11, 1917 in Chicago to Feodor Ciesielski and Vera Bergmann.  Both Feodor and Vera were born in Chicago, though Feodor’s family came from Poland and Vera’s from Germany.  Feodor was one of fourteen children and had little schooling.  He worked as an usher in a movie theater, which is where he met Vera, the concessions girl.  Years and years later, Agnes discovered that when her parents got married, Vera was already seven months pregnant with her!

After they got married, Feodor quit his job at the movie theater and got a job as an electrician.  They moved from apartment to apartment in the Milwaukee, Belmont and Western area of the city, and Vera had three more children: Polly, Bud, and Wilson.  As time went on, Feodor began to drink heavily and became an alcoholic.  He and Vera’s marriage, never a happy one, as it turned out, disintegrated completely when Vera went to live with another man by the name of Oscar Schaffer and took the children with her.

Any hopes that Agnes had that their life would be better with Oscar were quickly dashed.  She quickly grew to hate Oscar, though she does not say why, but her mother seemed content to stay with him.  Vera lived with him for twelve years before finally getting married to him.  Feodor, meanwhile, later died in the TB ward of Cook County Hospital in 1942, a “broken-down alcoholic.”

Agnes quit school after seventh grade to get a job and desperately wanted to move out on her own after the family moved in with Oscar.  Vera refused to let her, though, until she turned eighteen. When her eighteenth birthday finally came, she left and took a job as a maid for a wealthy family, which provided room and board.  She stayed away from the family for almost a year before being persuaded by her sister, Polly, to come home to help celebrate their brother, Wilson’s, graduation. Agnes agreed and at the party was introduced to Polly’s boyfriend, a man by the name of Vince Faraldo, whom she was instantly attracted to. When Vince asked her out the very next day, Agnes agreed, but was wracked with guilt that she was betraying Polly.

Vince and Agnes really hit it off, but Agnes worried about what kind of man would switch his affections so easily, especially between sisters. Vince managed to convince her, though, that he had only recently met Polly and that she was more of a friend than anything else. When Agnes finally worked up the courage to tell Polly how she felt about Vince, Polly didn’t seem to mind at all. “He’s not that great. You can have him!” Polly supposedly told her.

With Polly’s blessing, then, the young couple began dating and married in 1939. Agnes quit her job as a maid and became a housewife. When they met, Vince had a job delivering coal and ice, but after they got married, he began working for the B & O Railroad and finally ended up as a cement mason. Their first baby, Anthony, was born in 1940, and two years later, Rosamund, was born. When the World War II broke out shortly thereafter, Agnes and Vince made a conscious decision not to have any more children. Fortunately, Vince did not have to serve in the army because he had stomach ulcers.

Agnes and Vince first lived in an apartment near 12th and Taylor, close to where Vera lived and a year later moved to May St. and Polk, which was where Anthony was born.  From there they moved to Hermitage and Taylor, where they remained for eight years until they eventually had to vacate their apartment because the University of Illinois Hospital was buying up land in the area to expand their campus.

Agnes has an interesting story about that area of the city and enjoys sharing it with anyone willing to listen.  According to her, in 1917, the same hospital bought up the nearby, vacated Chicago Cubs ballpark, also known as West Side Park, which was located at Polk and Wolcott and which was where the Cubs won two World Series championships.  At the time that it was still being used as a ball park, however, there happened to be an insane asylum located just past the left field fence.  Agnes says that it is common knowledge that during the games, the inmates of the asylum used to scream crazy things out of the windows, which is supposedly where the phrase “that came out of left field” originated!

At any rate, Agnes and Vince were thus forced to leave the area and moved north to Division Street, just across from Humboldt Park , where they stayed in a friend’s basement apartment until they could find something better.  Agnes says that it was hard to find a place in those days and that many did not like children.  They eventually did find a place down the street on Division and stayed there for fifteen years.  Then they moved to Drake and Belmont and stayed there for another twenty years until Vince died of cancer in 1984.

After Vince passed away, Agnes lived on her own until her eyesight began to get bad.  Her daughter, Rosamund, persuaded her to come and live with her in Antioch, Illinois, very far north of the city.  Agnes stayed there for two years and enjoyed being with family, but in the end, she missed the city too much and decided to go back, much to the family’s dismay.  They helped her, however, to move into a basement apartment on Montrose, where she remained for one year before moving to Forest Preserve Drive.

Needless to say, Agnes was a very independent woman and was able to care for herself relatively well despite her failing eyesight.  When she was nearly hit by a car when attempting to cross the street, however, she began to become frightened of leaving her apartment at all.  She became depressed and reclusive, so Rosamund and Anthony decided to intervene.  Anthony told her that his mother-in-law had just gone to live in a nursing home on the NW side and that she really liked it.  Curious, Agnes agreed to visit it and also really liked what she saw.  She agreed that it would be the best, safest place for her and so, one more time, perhaps her last, she moved.

Agnes is adjusting very well to her new home and is very eager to meet people and to help out all she can.  Currently she enjoys helping the staff fold laundry and has joined many activities.  She loves smoking with her fellow residents in the smoking lounge, and has a wonderful sense of humor.  She says that her hobby used to be embroidery, but since she can no longer do that because of her eyes, she is hoping that she can find some new hobbies at the home!  Agnes has a real zest for life and is a very fun person to converse with and be around.  She has quickly become a favorite among her fellow residents.