Chicago’s Game of Chance and the Girls Who Kept Score 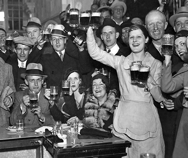 In the opening chapter of A Girl Like You, young Henrietta Von Harmon works as a “26 Girl” at a corner tavern, Poor Pete’s.  Though virtually unknown in any other part of the country, 26 was once a very popular pastime across a variety of bars and cigar shops throughout Chicago.  Even the exclusive Palmer House and the Playboy Club had 26 tables, and at one point over 5,000 “26 girls” were employed throughout the city to stand prettily at a table and keep score, pushing drinks and often securing tips from the winners.  The basic idea behind the game was to roll 10 dice thirteen times in hopes of turning up a pre-designated number, such as sixes, at least 26 times or more.  The ante to get in a game was a quarter, the prize for rolling a 26 was usually a free drink on the house.

The game of 26 had a rocky existence spanning its birth in the 1910’s all the way through to the ‘50’s.  At different times, city ordinances were passed to attempt to ban 26 games as a form of gambling in connection with the sale of alcohol, but following the end of prohibition, police tended to look the other way, although they reserved the right to close down any bar or game they deemed a “public nuisance,” which the police do on a number of occasions to poor Mr. Hennessey, the owner of Poor Pete’s.

In the 1940’s, the authorities again attempted to rid the city of 26 games when the Illinois Liquor Control Commission tried to shut them down.  The Chicago City Corporation Counsel, however, protested, saying that the state did not have jurisdiction over local ordinances.

When World War II broke out, however, 26 girls came under attack for other reasons.  In 1945, one newspaper ran a photo of a dice girl with the following caption:  “War plants are crying for women workers as well as men. Yanks are gambling with death on battlefields. Yet 26-game dice still roll merrily.”

It was the beginning of the end, really.   A game of 26 could still be found into the ‘50’s and ‘60’s, but it was eventually outlawed in 1962 as it had become at times synonymous with the mob, with many 26 girls also doubling as prostitutes.