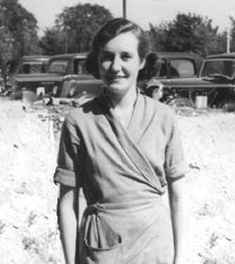 Marta Sirko was born on October 12, 1935 to Yaroslav and Kateryna Sirko, who were Ukrainian immigrants to Brazil.  They fled Europe in the early 1930’s to avoid the war they felt sure would soon erupt.  In Brazil, they were able to buy a small farm and eek out a meager existence, eventually having nine children.

Like most of her siblings, Marta attended elementary school, but according to her older sister, Zoya, “nothing would stay” for poor Marta.   Though she was obviously never officially diagnosed with a learning disorder, Marta found school very difficult and often failed. Zoya attempted to help Marta, but Marta would repeatedly tell her that the teacher’s words “go right through me.” She eventually gave up and stayed on the farm to help her mother with the eight other children.

As a young woman, Marta decided that she wanted to go live on her own in town, which happened to be seventy-five miles from the farm. Her parents agreed, and she tried it for about three months before she got too homesick and dejectedly returned to the family.  Back on the farm, Marta continued to help her mother and watched as all of her siblings eventually left to either get married or immigrate to the United States.

When Marta was about twenty-seven years old, she again voiced her desire to leave.  One of her brother’s, Josef, had immigrated to Philadelphia, and Marta proposed to go and live with him there.  Her parents agreed and sent Zoya, too, hoping it would be a better life for the sisters.  Both Marta and Zoya were able to get a job in a factory, where they remained for over fifteen years.  Zoya eventually married and moved out of her brother’s house, but Marta stayed, as she had nowhere else to go.  She was not a very social person, Zoya says,  and had a difficult time learning the language.  When she wasn’t working, she spent much of her time watching Josef and his wife’s four children.

One night, however, when Marta was in her early forties, a friend persuaded her to go to a party.  Marta was reluctant to go, but finally agreed and was introduced to several people, one of them being a man by the name of Nicolau Honchar, who was also Ukrainian.  According to several people at the party, Nicolau was merely cordial to Marta that night, but somehow she developed an extreme crush on him and believed the two of them to be in love.  Though she never saw Nicolau again, Marta dreamed of marrying him and spoke of little else for weeks.  When Marta’s friend finally told her that Nicolau was not interested in her and was in fact dating someone else, Marta suffered a sort of breakdown.

According to Zoya, Marta was always a very nervous, anxious person who worried constantly and could not navigate the normal ups and downs of life.  The episode with Nicolau, she says, seemed to push Marta over the edge.  She spiraled into a depression, frequently calling herself stupid and an idiot.  “What is wrong with me?” she would ask over and over, referring to the fact that she wasn’t married and that she hadn’t been able to succeed at school, learn to drive, or to speak English.

Shortly after her breakdown, Marta went through “the change of life,” which, Zoya says, made everything worse.  Marta’s only pleasure in life was apparently getting her hair done.  As a young woman, she also loved to do embroidery work, but she lost interest in it as her depression grew worse.  In 1981, Zoya, at her wits’ end, finally decided to take her sister to a hospital, where she was admitted for depression.

It was at this point that another of the brothers, Ivan, suggested that Marta should come and live with him and his wife, Anna, in Chicago for a “change of scenery.”  Zoya and Josef, themselves weary from having to care for Marta for years, eagerly agreed with this plan.  At first, Marta seemed to enjoy her new surroundings, but she unfortunately spiraled back into a depression.  Her anxiety worsened, also, and she began to endlessly pace, refusing to ever sit down.  She also began to pick at her skin, which led to several infections.  Eventually, Ivan and Anna were forced to hospitalize Marta another four times, the last one being after she attempted to slit her wrists.  It was after this particular incident that Ivan and Anna “admitted defeat,” and decided to admit Marta to a nursing home.

Marta, for her part, is not making the best transition to her new home.  She constantly walks the hallways and says little, even with the help of an interpreter.  Frequently, she “zones out” when people speak to her, looking straight ahead as if she doesn’t hear or see the person trying to address her.  She is not interested in meeting other residents, nor in joining in the home’s activities.  The only thing she seems to enjoy is getting her hair done.