From Professional Waiter at the Drake Hotel to Navy Bartender 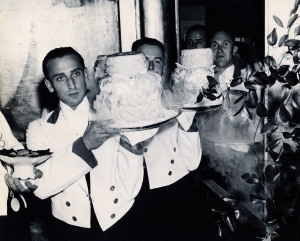 Gonzolo Rochez was born in Texas on February 2, 1908 to Fernando and Sonia Rochez “a few years” after the U.S. “took over” Texas from Mexico.  This event, however, occurred in 1848, so he is off by a few years, though maybe he views it from a different perspective.  Gonzolo enjoys telling his life story to anyone who will listen, though he frequently repeats “I had a horrible life.”

According to Gonzolo, his parents died when he was five or six years old.  He says that he doesn’t remember them at all and doesn’t know how they died.  He was sent to live with his godmother in the same village, but she was old and poor and couldn’t really take care for him.  Not knowing what else to do, she sent him to an orphanage run by nuns.  Gonzolo hated life at the orphanage.  He says that he was taught to read and write, but that he was always hungry, so he decided to run away.  He became a street urchin, then, wandering from place to place and was constantly “bumped or kicked around.”

In his late teens or early twenties, Gonzolo made his way to Chicago with a few friends, where he found a job in a restaurant.  Eventually, he found a place to live as well and sent for his girlfriend, Angelina Poblete, back in Texas to join him.  Gonzolo and Angelina soon married, and Gonzolo began to look for a better job.  Gonzolo eventually landed a position at the Drake Hotel—“the best of the best,” where he earnestly began to “learn the trade” of being a professional waiter.  For forty years, he worked as a waiter at only the best hotels: the Drake, The Blackstone, The Congress, and the Ritz-Carlton.  Gonzolo says of this time period:  “I was healthy, I didn’t complain, and I made a living.”

It was also during this time that he took up the hobby of painting.  He says that one weekend he happened to be walking around State Street and saw a painter painting the crowd.  Looking over the painter’s shoulder, he decided it didn’t look that hard, so he went to a dime store and bought some paint and brushes.  He was impressed with what he produced and took up painting in earnest.  It became his life-long hobby.  Apparently, a wealthy business man who once saw Gonzolo’s paintings offered to pay for him to take art classes, but Gonzolo refused his offer, saying “I want to paint what I want to paint, not what they tell me.”  Gonzolo claims that both the Drake and the Congress Hotels possess some of his artwork.

When WWII broke out, Gonzolo joined the navy and was stationed for four years in Ottumwa, Iowa, where he quickly became the company bartender.  He was apparently liked by everyone, especially the officers, and was “treated very well.”  He and three other men became “untouchable” because they were well-liked by the officers and were therefore given special favors.  Once, he says, he confided to an officer that he didn’t feel like he was doing much to help the war effort and worried what he would tell people back home.  The officer assured him that he was “helping as much or more with morale.”  Gonzolo says that those four years in the navy were the best of his life.  He would have stayed in if he didn’t have Angelina and two children, David and Eva, waiting back at home for him.  Only occasionally did he go back home to visit them, and when his four years of service were up, he reluctantly returned to Chicago and continued on with his career as a waiter.

Being away for four years, apparently did not improve what was already a rocky marriage between him and Angelina.  Gonzolo’s daughter, Eva, reports that he was a terrible husband and father.  She says that Gonzolo was a very controlling, domineering, manipulative man who beat Angelina and David, but never her.  The story of refusing art classes, she says, proves how much control he needed, that he would never subject himself to any outside authority.  “No one could tell him what to do,” Eva says.  This is why, she says, he could never belong to a church.  He was baptized Catholic, but doesn’t believe in God now.  Gonzolo says that “religion is an invisible weapon of the government to control the masses.”  Instead, he believes in “the supernatural power of the universe” and that “when you die, you go to the same place you go to when you sleep.”  Eva says that he has always been hot-tempered and did not have many friends.  Indeed, when asked about any significant friendships he has had in the past, he says “friends are make believe.”  When asked how he has coped with problems over the years, he says simply “I never had any problems.”

Angelina died in the late 1980’s, so Eva has been caring for Gonzolo on and off over the last several years.  David has been estranged from his father for the past twenty years and lives somewhere in California.  When Gonzolo’s health began to fail recently, Eva took him in to her own home for a time, but quickly realized she could not endure his domineering, manipulative ways and brought him to a nursing home.

Gonzolo has not made the transition well and remains very depressed.  “Why should I get better?” he asks.  “So I can plunge down again?  I’m old.  I’m 88 years old.  Let me die.”  He has not participated in many activities, nor does he seem interested in forming any relationships with the other residents.  His favorite thing is to do is to talk about the past with the staff.  He admits to liking to learn new things, however, which he says he has always tried to do throughout his life.  “It’s not hard to learn if you’re willing,” he says.