“No One Ever Helped Me” 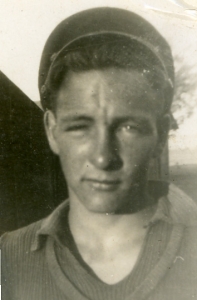 Jacek Sadowski was born on July 4, 1914 in a small village in Poland.  His parents, Gustaw Sadowski and Hania Nowak, were farmers, and Jacek was the youngest of eight children.  Unfortunately, Jacek’s mother died when he was just a year old, so his five older sisters raised him.  He attended the village school until the equivalent of eighth grade and then quit to help his father on the farm full-time.

Jacek and his father did not have much time together, however, before Gustaw died suddenly in his forties of a heart attack.  The farm then passed to Jacek’s oldest sister, Maria, and her husband, Alfons, whom Jacek describes as a “mean, terrible man.”  One by one, the siblings left the farm to find their own way, as no one could stand Alfons, until only Jacek was left.  At that point, Jacek’s situation went from bad to worse.  Alfons began locking him out of the house, forcing him to sleep in the barn with the pigs.  He was not even allowed any bedding and was told to sleep in the straw.

Jacek soon followed his siblings’ footsteps and left the farm as well.  He set off for the neighboring farms, hoping to get hired as an extra hand.  He eventually managed to find a place, but was still required to sleep in the barn, though he was at least given a cot and bedding.  Things continued this way for a couple of years for Jacek, during which time his hatred for Alfons grew.  He was interrupted in his plots to get even with him, however, when Germany invaded Poland.  Eventually, Jacked was captured and sent to work on a farm in Germany.  He was thankful for this, however, as he initially feared he was to be sent to a concentration camp, or worse, conscripted into the German army.

Despite the fact that he was technically a prisoner, Jacek didn’t mind his time in Germany and says that he had better living conditions there than any he had ever enjoyed in Poland.  When the Allies arrived to liberate them, he was reluctant to go back to Poland.  He was eventually sent to various camps run by the Allies, and in one of them, he met a young woman by the name of Rozalia Salomon.  The two of them married while still living in the camp, and for their honeymoon, they took a train ride through the German countryside because Jacek thought the scenery so beautiful.

When they returned to the camp, Jacek and Rozalia decided to apply for immigration to the United States with the help of the Allies.  A sponsor in America came forward and vouched for them, saying that an apartment and a job awaited them in Chicago.  When they eventually arrived, however, there was no job or apartment for them at all.  They were found wandering on Milwaukee Avenue by an old Polish woman who offered them an “apartment.”  Desperate, Jacek and Rozalia took it and were shocked to discover that it was really just one room with a bed frame but no mattress.

Jacek quickly set out to find a job and was hired to make cabinets for a company at Milwaukee and Belmont.  At the time, he was 36 years old, and he stayed at that job for 34 years, retiring when he was 70.  Jacek and Rozalia were eventually able to find a series of better apartments until they moved to one on Greenview, where they stayed for over twenty years.

Jacek and Rozalia had two daughters, Maggie and Ruth.  Rozalia stayed home with them and never worked outside the home, as she was always in very poor health.  In fact, Jacek says bitterly, he had to do everything inside the house and out, including caring for the girls, because Rozalia was always so sick.

Jacek says that he never had any hobbies because he never had time.  His favorite thing used to be drinking a cold beer on a hot day.  He says that people have no choice in their lives, that “things or fate just happen to you.”  He says that “I’ve had a bad life,” and he can’t seem to shake his bitterness, which Maggie and Ruth say he has had all his life.  He blames what he calls his “bad fortune” on the fact that his parents died so young and on his brother-in-law, Alfons, whom, he says, ruined his life.  “No one ever helped me,” is his constant mantra.

Jacek has been living alone until very recently when he began falling frequently and then had a heart attack, which hospitalized him.  His daughters, both of whom have families and work full-time, brought him to a nursing home to recuperate from surgery, though they want this to be a permanent placement for their father.  They have tried discussing this with him, but claim he is not interested in listening.  Both Maggie and Ruth report that their father is extremely stubborn and that he has always had a negative attitude, which has made it difficult for them to care for him as the years have gone on.  As expected, Jacek is not adjusting well to his new surroundings and says that he can’t enjoy himself because “it’s not my home.”