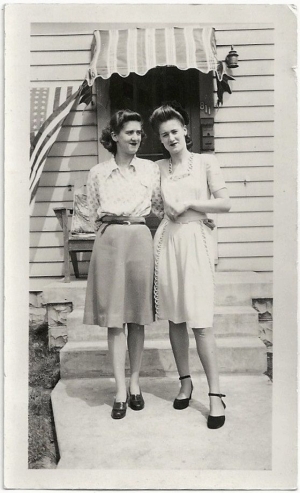 Doris Gockel was born on March 15, 1934 in Chicago.  Not much is known of Doris’s early life, except that her mother, Gertrude Molnar, who was of Hungarian descent, had Doris when she was very young.  About a year after Doris was born, Gertrude married a man named Walter Sands, who was not Doris’s birthfather, but who came to love Doris as his own child.  Gertrude and Walter never had any children together, so Doris was everything to them.

Doris went to school until the tenth grade and then quit to begin working.  Over the years she had a variety of jobs, though she says that her job at an ice cream parlor was her favorite.  Doris did not go out much, preferring to be at home with Gertrude and Walter, but one night her friends persuaded her to come to the St. Patrick’s Night Ball at the Merry Garden Ballroom.  After much urging on the part of her friends, Doris finally agreed to go, since it was very near her birthday, and it was there that she met a boy named Willie Gockel.  The two started dating and married very quickly.  Doris was just seventeen, and Willie was eighteen.  Willie worked as a plasterer, then as a carpenter, and eventually had his own little contracting business, while Doris stayed home and cared for their three children: Linda, Susan and David.

Doris says that “everything was fine in a way” between her and Willie, but after about twenty years together, she says that Willie started “drinking and going out with the guys.”  Eventually he “ran away with some woman.”  Doris’s son, David, does not know all of the details of went wrong in his parents’ marriage, but confirms that his father left when he was around twelve years old.  Doris had no choice but to find a job, then, and began working as a barmaid at Lakeside Tavern.  Doris worked there for over thirteen years and made a lot of friends, many of whom became like a family to her.  It was during that time, though, that Doris began to drink a lot, which, says David, was perhaps “just part of the job.”

Despite her drinking and her seedy job at the bar, David says that Doris loved decorating and fixing things up around the house.  She had a talent for decorating and had the further talent of being able to do it “on hardly any money at all.”  Her favorite thing to do was to go to garage sales with her mother, Gertrude, to find things they could refurbish.  They also both shared a love of gardening, particularly of flowers, and could both “make sticks grow.”  Doris and his mother were very close, David reports.  “They were more like sisters than mother and daughter.”

Unfortunately, in the early 1980’s, Doris suffered a brain aneurysm and was hospitalized for a very long period of time.  According to David, she nearly died on three occasions, each time having to be revived by the staff.  Doris made it through, but it was a long recovery, during which time she had to relearn everything.  Eventually Doris was able to go home and live independently, though her vision and equilibrium were not perfect, and, according to David, she has never been the same mentally.  She has always been just “a little bit off” since the whole ordeal, prompting David and his wife, Sharon, to get into the habit of checking on her several times a week in order to help her with various tasks.

Doris was able to manage this way for the next ten years or so until the early 1990’s when her daughter, Susan, separated from her alcoholic husband and went to live with Doris to “take care of her.”  David and Sharon think that this was the beginning of the end for Doris, as Doris then became subjected to what they call Susan’s “bad influence.”  Ever since the aneurysm, Doris had given up drinking, but when Susan came back to live with her, she started up again.  Likewise, David and Sharon believe that Susan, whom they say is also unstable, was probably not providing Doris with balanced meals or regulating her medication correctly.  Susan became very protective of Doris during this time and was resentful if David or Sharon tried to still help, claiming that it wasn’t necessary and that they were “interfering.”

Things went from bad to worse when Susan came home one day and found Doris out in the yard, unconscious.  It is not known how long she had been laying there, but the doctors concluded that she had had a stroke.  When she eventually recovered in the hospital enough to be released, David and Sharon thought it obvious that she should go to a nursing home, but Susan disagreed.  David attempted to call his other sister, Linda, to get her involved, but since she had been estranged from the family for a long time, she refused to have any part of the conflict between Susan and David.  Therefore, it was David against Susan, and despite David’s protests, Susan was eventually able to persuade the doctors to allow her to take Doris home with her again.

This arrangement, however, tragically only lasted about two months.  Two days before Christmas, 1995, Susan dropped Doris off at the emergency room of Swedish Covenant Hospital and took off, apparently reunited with her estranged, alcoholic husband.  From that point, David took control and arranged for Doris to be released to a nursing home.

Recently admitted, Doris seems to be adjusting well to her new surroundings, though she is confused much of the time and sometimes believes she is seeing various family members on television as she sits watching it.  She is able to converse with other residents, though she seems to have a hard time focusing and has to concentrate to speak.  She attends activities, but does not always participate unless helped by a staff member or a volunteer.  David tries to visit as often as he can, but he is also burdened with having to manage the care of his grandmother, Gertrude, who is also still alive and in a different nursing home.  Doris says that she would rather be home, but she understands that she cannot live alone.  “It’s not so bad here,” she says, but she misses being with her family, especially her mother.