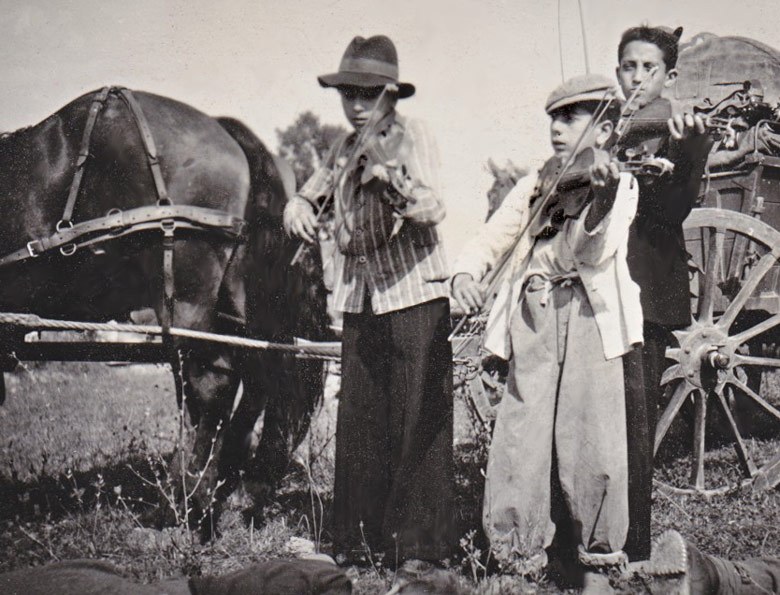 Eduardo Hernandez was born on November 7, 1922 in Mexico to Juan and Rosita Hernandez.  Eduardo says that he was the youngest of seven children and that his mother died giving birth to him.  His father worked as some type of laborer and, according to Eduardo, was a drunk who beat him and his siblings for even the smallest infraction.  He was particularly hard on Eduardo, whom he constantly blamed for Rosita’s death.

Eduardo did not go to school and spent most of his time roaming the streets and looking for work, though jobs were almost impossible to find.  His family was “very, very poor,” Eduardo says, and adds that “Mexico was terrible then.  You can’t imagine.”

Eventually, when Eduardo was thirteen or fourteen, he could no longer stand his father’s beatings, so he ran off with a theater group, where he spent many years dancing, singing, and performing with them.  He lived a nomadic life, never having any money, but, at least with the theater group, he says, he had a place to stay, usually in tents, and a little bit of food.  He repeatedly tried to find a more stable job, but there were very few of those.  Finally, when he was in his early forties, he decided to try his luck in America.

Eduardo made it to San Antonio, where he found work in a kitchen.  He didn’t like the work, but he did not have a lot of choices, he says, not only because he could he not speak English, but because he had never been to school and was ignorant of even the most basic of things.  He worked in San Antonio for a long time and then made his way north to Chicago, where he again found work in various restaurants.  On his days off, he would walk up and down State Street, marveling at the buildings and the people, and enjoyed taking everything in.  One day he saw a “help wanted” sign in the window of a small hotel, so he went in and applied.  The owner was a man named Robert Neilson, who would go on to become Eduardo’s lifelong friend.

After only three months of working in the kitchen of Robert’s hotel, Robert’s wife, Cathy, gave birth to a little girl, Amanda.  The nanny that they had arranged to babysit her quit at the last minute, so the Neilsons asked Eduardo to fill in until they could hire someone new.  Time passed, however, and soon the Neilsons and Amanda had grown attached to Eduardo, so they had him move in with them in their home in Park Ridge to become Amanda’s full-time nanny.  Eduardo did this for the next ten years until Amanda didn’t really need a nanny anymore.

When it became evident that he was no longer needed, Eduardo moved out and found another restaurant job in the city, this one with an apartment above it, which he rented out for “next to nothing.”  He never got married, he says, because he didn’t have enough money or a good enough job.  For many years, he continued to visit the Neilsons, whom he says were like a family to him, and sometimes did odd jobs for Robert while there.

Several years after moving back to the city, Eduardo became good friends with one of his co-workers, a man several years his junior by the name of Enrique Garcia.  Before long, Enrique offered to let Eduardo move in with him and his wife, Emily.   Eduardo accepted and lived with the Garcia’s for about five years until he had a sort of stroke and was hospitalized.

After an extended stay in the hospital, Eduardo was discharged to a nursing home. He claims that he was told it would only be a temporary arrangement until he was well enough to go home.  As the weeks progressed, however, Eduardo began to suspect that he was expected to permanently stay at the nursing home.  He became extremely agitated and tried to walk out of the facility in an attempt to get back to Enrique’s apartment, telling the staff that Enrique was his son.  When the staff tried to stop him, they claim he became violent and thus sent him to the psychiatric ward of a nearby hospital.

The hospital staff were eventually able to track down Robert Neilson, who then got involved in Eduardo’s plan of care.  He helped the discharge staff to arrange for him to be released to a different nursing home.  Robert says that he has a hard time believing that Eduardo became violent and is meanwhile trying to help him to make a better transition to this current facility.  He says that Eduardo is “a good man at heart; he’s just a little crazy now.”   Enrique also vouches for Eduardo, saying that he is a good man, but that caring for Eduardo in their home was becoming too much for him and his wife.  They felt guilty when he was discharged to a nursing home, but relieved, as well.  Robert has now listed himself as Eduardo’s official contact and says that he is committed to visiting him at least weekly.

Eduardo is making a relatively smooth transition.  He does not exhibit any of the problem behaviors he supposedly engaged in at the previous nursing home, but he seems depressed much of the time.  He speaks little English, so it is difficult for him to interact with the other residents.  He spends most of his time in the day rooms watching TV or talking to any staff members who speak Spanish.  They have asked him, from time to time, to sing some songs from his performing days, but Eduardo waves them away, saying that all of those things belong to the past.  “I don’t remember,” he says dismally.

The only time he perks up is when Robert comes to visit.  Recently, Robert surprised Eduardo by also bringing Amanda and her two children to the home to visit with him.  Eduardo was absolutely delighted to see Amanda again and spent the afternoon showing them around, introducing Amanda to the staff as her “his girl” as often as he could.  Since her visit, Eduardo has brightened considerably and continues to ask when his girl will return.