They Met in October and Married in February! 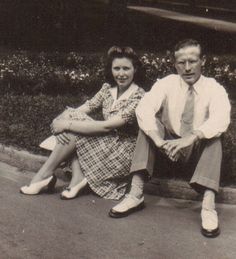 Emilia Mundt was born on October 26, 1913 in Chicago to Jan Jelen and Zofia Nedved, both of whom were immigrants from Slovakia.  Jan came to America with a relative when he was nineteen, and Zofia came with her father when she was fifteen.  Somehow Jan and Zofia met and married when Zofia was just sixteen.  They had two children very close in age: Bartholomew and Emilia, and twelve years later, they had another girl, Denisa.  Zofia stayed home and cared for them in their apartment at Diversey and Ashland, and Jan worked as a maintenance man.

Emilia attended school until eighth grade, at which point Jan said “that’s enough.”  Emilia lied about her age, then, and got a job doing factory work at Stewart-Warner, a company that manufactured speedometers and other auto parts.  She stayed there for two years before leaving to work at a toy factory, but eventually returned to Stewart-Warner.

In 1941, when Jan was 53 years old, the family decided to take a trip to Michigan to visit Jan’s brother, Imrich, and his family.  Imrich was eager to show Jan his new car and took him out for a ride on some country roads.  Tragically, Imrich apparently lost control of the car on a curve and collided with an oncoming milk truck, causing the car to roll several times.  Jan broke his back in three places and ruptured his spleen and died in the ambulance on the way to the hospital.  Imrich walked away without a scratch.  From that point on, the two families never spoke again, and Imrich did not even attend the funeral.  Zofia eventually remarried, but only Denisa was still living at home at the time.

When Emilia was twenty-nine, she attended a cousin’s wedding and was introduced to the brides’ brother, Woodrow Mundt.  Woodrow was a third generation German and worked as a bank clerk.  A few days after the wedding, Woodrow asked Emilia if she would ever consider going on a date with him.  Emilia said yes, and the two of them went out for the first time on October 3, 1942. On December 18 of that year, Woodrow proposed and on February 27, 1943, they were married.  “You would never know it,” Emilia says, “but Woodrow was quite a romantic.”  Though she had been on other dates before, no one ever stood out as that special until she met Woodrow.  He thoroughly charmed her, and she fell in love with him right away.

One thing that Woodrow did not tell her, however, until they had been on several dates together was that he had been married before and had an eight-year-old son, Theodore.  Emilia says she was surprised, but in the end, she decided she didn’t mind.  She was head-over-heels for him.  When they married, Emilia quit her job at Stewart-Warner to stay home and take care of Theodore.  She and Theodore bonded right away, and the two she became very close.  Three years later, she and Woodrow had another baby, Virginia.

Emilia and Woodrow apparently had a very happy marriage.  Woodrow was eventually promoted and became a supervisor, working at the same bank for over 40 years.  They moved a few times over the years, eventually buying a house at Foster and Nagle, where they lived for 33 years.  Woodrow and Emilia had very similar tastes.  They enjoyed going to the opera and the theater and often had friends over for cards, though they weren’t a “drinking, dancing sort of group,” says Emilia.

Once Virginia was in school, Emilia went back to work part-time at an insurance company.  She loved reading and crosswords, and was a very active member of St. Cornelius parish.  She raised Virginia Catholic, though Woodrow and Theodore were Lutheran.  Eventually, however, Theodore converted to Catholicism in order to marry his girlfriend, Janice.  Virginia eventually married, too, and moved to Phoenix, Arizona, though she and her husband have no children.

In 1973, Woodrow had a mild heart attack and took early retirement at age 63.  He was physically weakened, however, and needed a lot of help.  As the years went on, Emilia was less and less able to assist him as her own health began to decline.  Eventually, they hired a nurse to come in for four hours a day, five days a week.  Theodore and Janice would then fill in the gaps on the weekends to make sure they were okay.

In May of 1994, however, Woodrow developed double pneumonia and passed away on Memorial Day.  Since that time, it has become apparent that Emilia is not able to live alone, so Theodore and Virginia decided to put her house on the market, thinking it would take a long time to sell, during which time they could make a plan about what to do with their mother.  The market surprised them, however, and the house sold in a week.  On top of that, right at about that time, Theodore’s wife, Janice, passed away very suddenly, throwing him into debilitating grief.

Meanwhile, Virginia has also been tied up with personal things in Phoenix and has not yet been able to make it up to Chicago to find some sort of placement for her mother.  Desperate, Virginia called Emilia’s brother, Bart, and his wife, Dorothy, who still reside in the Chicagoland area, for help.  Though Bart and Dorothy are themselves elderly, they agreed, with their son, Steve’s help, to go pick Aunt Emilia and temporarily admit her to a nursing home until Virginia is able to come up and assess a more permanent solution for her.

Emilia agreed to accompany her brother and sister-in-law, but she insists she doesn’t belong in a nursing home and is consequently not adjusting well.  As she believes her time at the home to be temporary, she does not want to make any relationships or join in any activities.  She appears on edge and pessimistic much of the time and has a very dry sense of humor, which is usually lost on the other residents, though the staff find her funny.  She is alert, but she still seems to be grieving for Woodrow, whom, she says was truly her best friend.  “People thought we married too quick,” Emilia says, “but we proved them wrong.  We were always meant to be together.”