She Met Her Husband at the Candy Shop 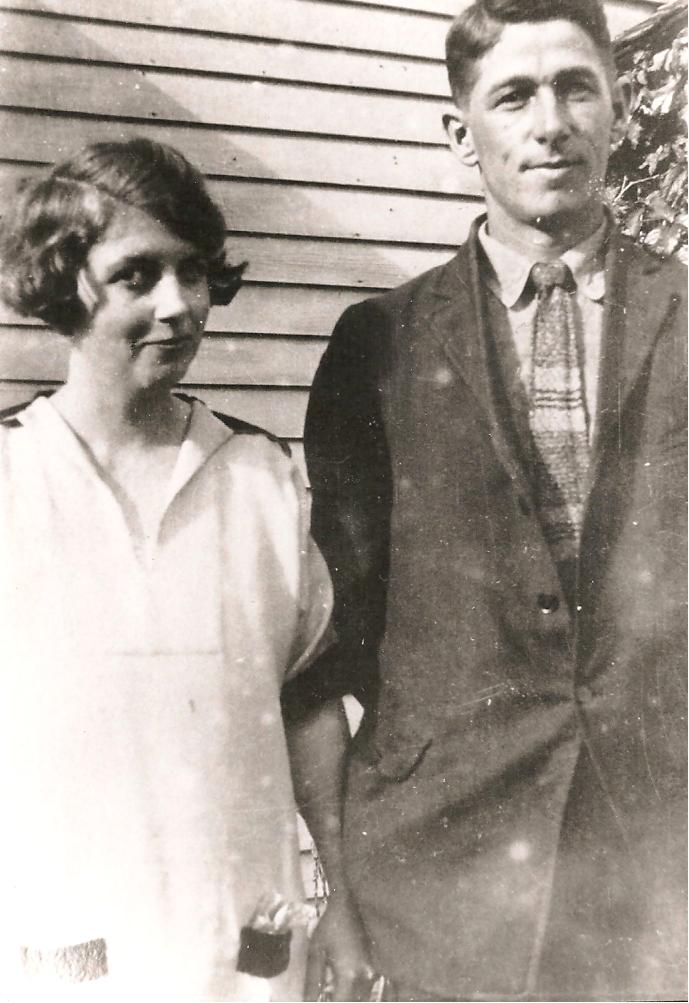 Wilma Ostrowski was born on January 7, 1909 to Adolf Achterberg and Lousia Keller in Stoddard, Wisconsin.  Adolf and Louisa were of German descent, but were both born in Wisconsin—Adolf in La Crosse and Louisa in Manston.  Adolf worked as a carpenter and was also the mayor of Stoddard for twenty-five years.  Louisa cared for their ten children, all of whom lived into adulthood except one, Melvin, who died of a “throat epidemic.”

Wilma, who was one of the youngest in the family, only attended two years of high school.  She would have liked to have gone on, she says, but in those days, the Stoddard Public High School only offered two years.  In order to get her diploma, then, she would have had to travel to a neighboring town each day to attend a different high school.  This was completely unrealistic for the Achterberg family, so she decided to quit and managed to get a part-time job doing laundry in a linen supply company.

Not long after Wilma started working, she met a young man, Simon Ostrowski, at a candy shop where she and some of her friends liked to go after work.  Simon was seven years older than her and had come into the shop to buy some sweets for his mother’s birthday.  Recognizing one of the girls gathered there, he went over to say hello and was then introduced to Wilma.  After that, Simon began showing up randomly at the candy shop in hopes, he later told Wilma, of seeing her again.  Whenever he did run into her, he always bought her a piece of candy and finally one day worked up the courage to ask her out on a date.  Happily, Wilma accepted.  Not long after, they began seriously “courting,” and two years later, when Wilma turned eighteen, they got married.

Simon was a carpenter like Wilma’s father, but once the depression hit, it was hard to find work.  The young couple lived with Simon’s mother for a while but then moved to Lake Ross, Wisconsin; then to McGregor, Iowa; then to Genoa, Wisconsin; and then back to Stoddard, looking for steady work.  Simon was able to find short-term jobs in each town, but never a full-time position that would allow them to stay.  So after each job ended, the little family had to move again.

Finally, in 1941, Wilma and Simon decided to try their luck in Chicago and moved to an apartment on Elston Avenue.  Simon was able to find a permanent job making cabinets, and Wilma cared for their three children: Donald, Mildred and Harry.  After they moved to Chicago, however, they had three more:  Albert, Lorraine and Thelma.

Wilma says she enjoyed being a mother and keeping house, especially after they finally settled down in Chicago.  She loved baking, sewing and gardening and was a very active member of the Immaculate Heart of Mary Sodality.  She was a quiet woman, her children report, but she loved being around people.

For reasons not explained, Wilma and Simon divorced in 1969 after 42 years of marriage.  Wilma moved to her own apartment on Belle Plaine with their son, Harry, the only child still living at home. Harry had enlisted in the army and fought in the Vietnam War.  While there, he was a victim of Agent Orange, among other things.  When he was discharged home, he had many health problems, including diabetes.  After several years of battling his illnesses, he had to have one of his legs amputated.  He eventually died of a heart attack in August of 1994.  Simon, meanwhile, had died in 1973 of a stroke and lung cancer.

Wilma was quite depressed over Harry’s death, but now says that she is “glad that he is no longer suffering.”   She eventually returned to all of her old activities to try to help take her mind off of Harry’s death and likewise joined even more ministries at her church.  She also spent a lot of time with her other children and their families, most of whom still live in the Chicagoland area.  “I’ve always liked to keep busy,” she says.  Not too long after Harry’s death, however, Wilma started having her own health issues and thus decided to preemptively move into an assisted-living apartment.  Wilma has tried valiantly in the last few years to hold on to her independence, but she has fallen multiple times and has grown increasingly reliant on getting around in a wheelchair, so much so that her doctor recommended nursing home care.

Wilma says that she has always faced problems head-on, so, knowing that a nursing home was inevitably in her future, she decided to get it over with.  “Why put it off until tomorrow?” she repeatedly asked her children.  Each of her daughters offered their homes to her, but Wilma did not want to burden them.  Instead, she reached out to Lorraine and Thelma and asked them to help her find a nursing home.  Lorraine and Thelma are saddened, they say, about having to admit their mother, but they are relieved that she will be cared for and stimulated.  “She was becoming a hermit,” says Thelma, “which wasn’t like her at all.”

Wilma is thus making a very smooth transition to her new life at the nursing home.  She has difficulty striking up conversations with other residents, but she likes to be asked questions and will carry on a conversation if someone else starts it.  Her favorite activity is reading, particularly books which have a religious theme, and she enjoys watching the news on TV.  She also enjoys participating in any of the religious services or activities offered.  Her family is very supportive and visit her often.  Their mother, they say, has always been “a strong, kind-hearted woman who would do anything for anyone.”